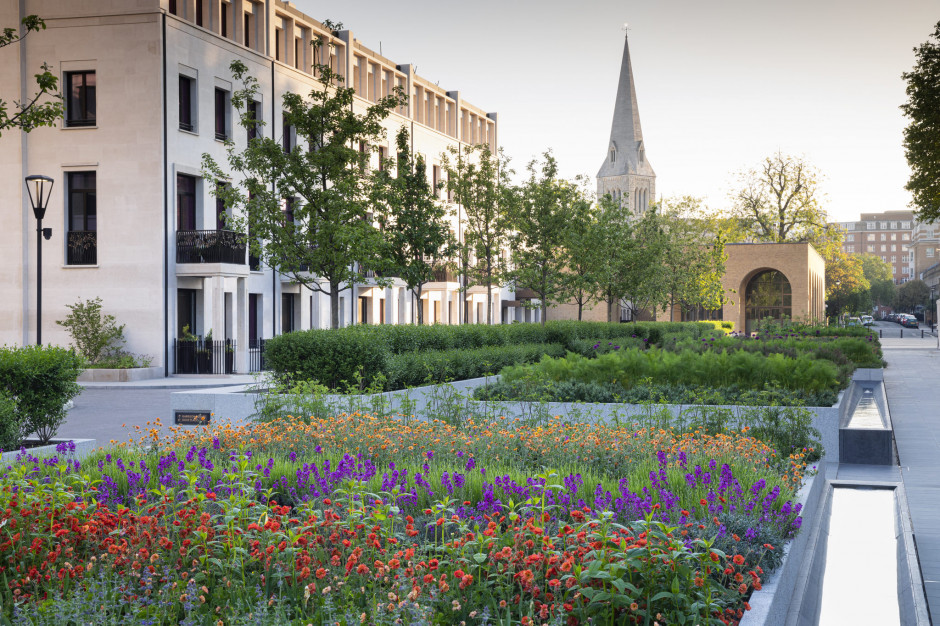 Chelcea Barracks dates back to 1855, when George Morgan designed the first military building that was not a project of royal engineers. Currently located in London’s affluent Belgravia neighborhood, Chelsea Barracks is the only one in Europe to have LEED neighborhood development certification at the highest platinum level and one of only sixteen in the world.

The property was developed by the global giant Diyar Real Estate Company, and it is the product of a historic collaboration between the best British planners and architects. The overall concept and framework of architectural design was created by Michael Square, Sir Jeremy Dixon, Edward Jones, and landscape architect Kim Wilkie.

In addition, many architects and landscape architects have participated in the Six Phase project in its various phases. These include Gustafson Porter + Bowman Studio, PDP London and Ben Pentreath Studio. From the start, the main assumption of the developed master plan has been the sustainability of the designed investment.

Chelsea Barracks is one of the most important projects to have taken place in central London in the last few decades. A significant portion, up to 40%, of the investment area has been designated to create seven new city squares with parks accessible to the public. It’s five acres of green space in central London – an unprecedented area yet.

The resulting gardens display the historical architecture of carefully planned buildings in the spaces between them. Plants that grow local species, culinary and medicinal plants. Around it there are apartments, penthouses, townhouses, and outdoor public spaces.

Sustainable development as a component of urban spatial planning

As the first project in Europe to earn LEED ND (Neighborhood Design) Platinum certification, Chelsea Barracks paved the way for integrating sustainable development into urban planning. The certification process with which we have contributed to applying sustainable thinking and practices to all aspects of the master plan and building design, including: traffic regulation and street accessibility, urban green spaces, public access, open spaces, biodiversity and many other things that lead to improvement Air and environmental quality, he says Henry Square, Studio partner Square and Company.

Achieving LEED Platinum requires a focused and holistic approach to every aspect of the public domain and building design. We believe this process has brought additional quality to the master plan and shows that introducing sustainability at this stage of the design can add significant value to the project, meet climate change needs and reduce carbon dioxide emissions. Henry Square concludes that this is a pilot project of which we are extremely proud.

Don't Miss it Metro Exodus Enhanced Edition will debut in May. The game requires a card with ray tracing support
Up Next Spain: a mass celebration in Madrid. Bullfighting among the attractions