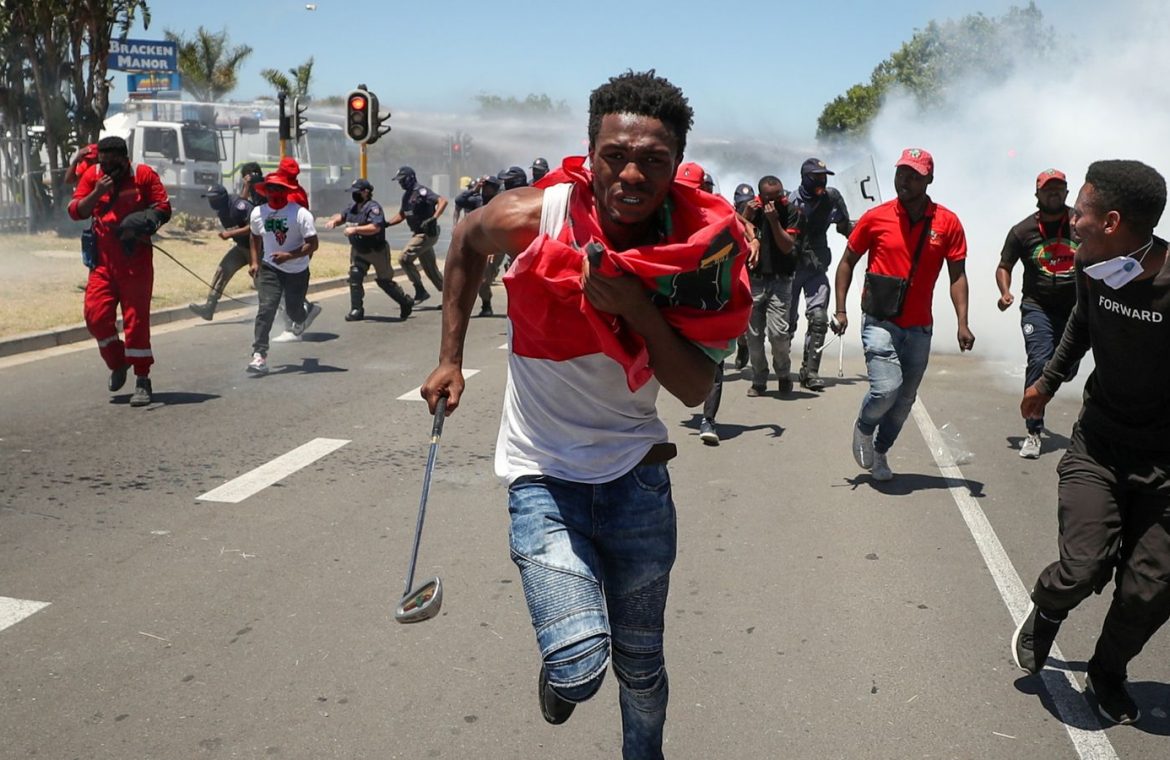 Rubber bullets, sound bombs, tear gas and water cannons were used against protesters at a South African school accused of holding a “whites only” concert.

Hundreds of protesters from the opposition FFP gathered at Brackenville High School in Cape Town, in a predominantly white neighborhood, on Friday.

Some of the protesters, most of them black, were seen carrying machetes, sticks and golf clubs, but they were met by heavy police and private security attendance, and some were wearing riot gear.

There is a strong police and private security presence outside Brackenville High School this morning. EFF members return to school to protest racial discrimination. ENCA’s Ronald Massinda is on the scene. Courtesy # DStv403 pic.twitter.com/rhSnPBOSbc

The anger centered on a school concert earlier this month, with only white students allegedly invited.

It was organized after the cancellation of the original party for students who take school-leaving exams due to coronavirus restrictions, and was limited to 100.

The school said it was a special event organized by the parents and had nothing to do with them, but that the teachers allegedly attended.

A public backlash began after a man posted a video of what he described on social media as a “whites only” party.

Fields near Cape Town’s Brackenville industrial park were set on fire and windows of the local post office were damaged in the aftermath of an EFF protest in the area. The EFF has been protesting near Brackenfell High School over allegations of racism at the school #sabcnews

Pictures from the scene showed officers firing rubber bullets into the crowd that dispersed.

The Sudanese armed forces said nearby fields were set on fire and a local post office was damaged, but there were no reports of injuries.

Authorities said the force became necessary after protesters ignored instructions to stay at an agreed point and began approaching the school.

Black party members clashed with white parents outside of school in a similar demonstration last week.

He accused both sides of undermining non-racism, describing the case as “a symbol of unresolved issues from South Africa’s past”.

Nearly 80% of South Africa’s 60 million people are black, but many of them are still in poverty 26 years after the end of apartheid.

The EFF says the deep-rooted racism that still persists in South Africa, and especially in neighborhoods like Brackenfell, is holding back blacks.

The Brackenville community has “taught their children to be racists,” said Bobby Mallula, Deputy Secretary General of the EFF.

Don't Miss it Manchester United have been hit by a “sophisticated” cyberattack, but say fan data is safe | football
Up Next Rangers’ accounts reveal the shareholder selection matter as the Ibrox money folks pledge to close the financial gap