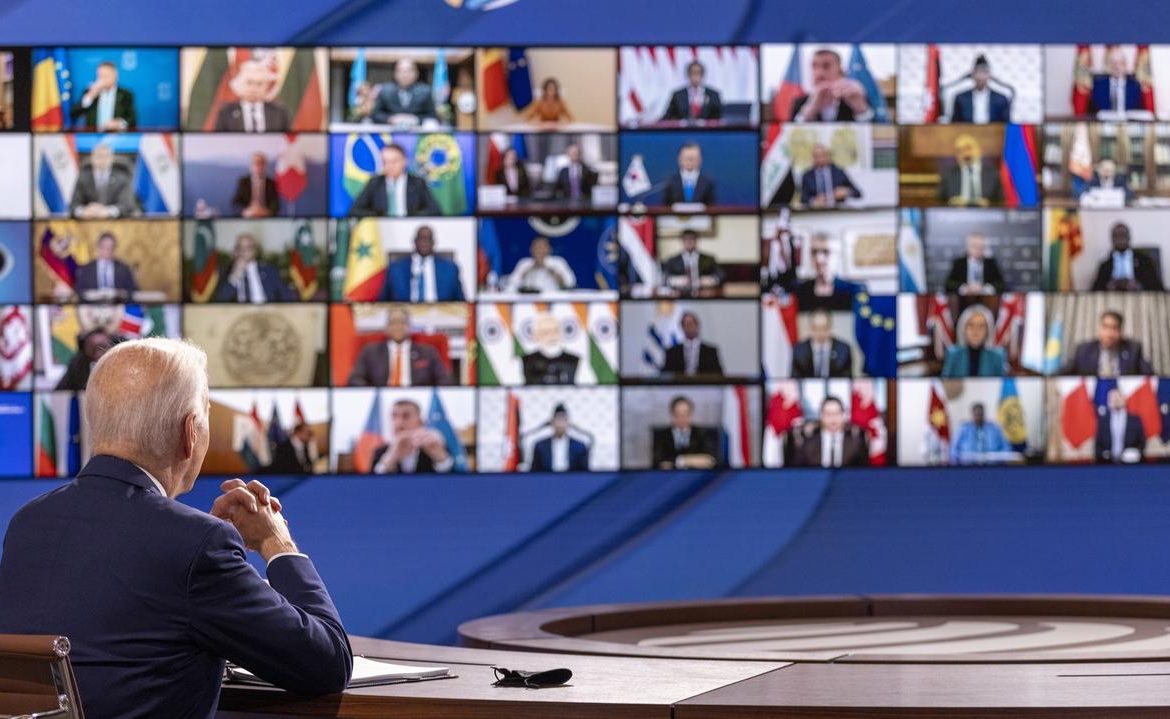 The Virtual Democracy Summit was held on Thursday and Friday. The President of the United States, Joe Biden, invited representatives of the authorities of more than 100 countries. The American leader called for a global promotion of democracy. “Authoritarian regimes will not be able to extinguish the heat of freedom that burns in the hearts of people all over the world, in every corner of it,” he said. Speaking at the summit, President Andrzej Duda called for solidarity with Belarus, describing it as one of the most important challenges in the democratic world.

The Summit for Democracy is a virtual meeting organized by the United States to “restore democracy at home and confront authoritarian regimes abroad” on December 9 and 10. Its three main themes are defending against tyranny, fighting corruption, and promoting respect for human rights.

The summit brought together representatives from more than 100 countries. President Joe Biden has called for the promotion of democracy around the world, calling protecting rights and freedoms in the face of growing authoritarianism a “major challenge” in the current era.

At the end of the summit, participants can watch a short film created specifically for the occasion by Discovery.

“Democracy around the world needs heroes in the face of long-standing and troubling challenges to democracy and human rights,” Biden said as he opened the summit. During the speech, he emphasized, among other things, that “renewing our democracy and strengthening our democratic institutions requires a continuous effort.”

At the conclusion of the two-day virtual summit on Friday, Biden said he was impressed by the energy and commitment of many of the participants and expressed his delight at the commitments states have made to improving their democracies. – We emphasized the importance of protecting media freedom, and how progress in the status of women and girls is an investment in the success of our democracy. “We’ve focused on the need to support human rights defenders and make sure that technologies that make our lives easier are used to uplift people, not confuse them,” the White House host said.

He praised the initiative of the presidents of Panama, Costa Rica and the Dominican Republic “to strengthen democratic institutions and alliances and work together on transparency, human rights, economic development and the strengthening of democracy in the region.”

Biden: Authoritarian regimes can never turn off the heat of freedom

Biden promised to strengthen American democracy by reforming electoral laws to make voting easier. So far, he said, these reforms have met with stiff resistance in Congress.

He also announced that he will continue to support the COVAX program and ship vaccines to countries around the world. He expressed his hope that during the upcoming summit next year, countries will be able to settle the commitments made during the current forum.

– Totalitarian regimes will not be able to extinguish the heat of freedom that burns in the hearts of people all over the world, in every corner of the world. Biden said he knows no boundaries and speaks any language.

See also  Brazil. A call to women to wait until the "best times" before becoming pregnant. It is related to the Coronavirus

In addition to Biden, the two-day summit was attended by 110 heads of state from around the world – including Polish President Andrzej Duda – as well as NGO activists and representatives of local authorities and trade unions. President Duda called for solidarity with Belarus, describing it as one of the most important challenges in the democratic world. He also assured the Belarusians that Poland would continue to be a proponent of democracy.

Don't Miss it Gregg Popovich leaves Team USA. Known as his successor
Up Next PS Plus on sale! PlayStation Polska encourages 12-month subscription