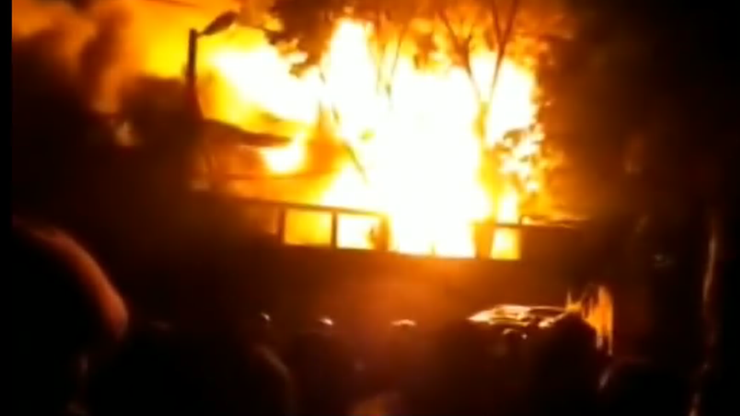 A crowd of protesters stormed the home of Sri Lankan Prime Minister Ranil Wickremesinghe on Saturday evening. The police and the prime minister’s office confirmed that the house had caught fire. Recordings from the scene appear in the media. The Speaker of Parliament announced in the evening that the country’s President, Gotabaya Rajapaksa, had agreed to hand over power next Wednesday.

Angry sentiments do not fade in Sri Lanka, and stormy protests continue in the capital, Colombo. On Saturday evening (local time), the crowd set fire to the home of the country’s Prime Minister, Ranil Wickremesinghe. The Prime Minister had previously been moved to a safe place.

a look: Sri Lanka. Rebellion in Colombo. The crowd stormed the president’s seat

According to the media, the information was confirmed by the police and the Sri Lankan Prime Minister’s office: “Protesters broke into the prime minister’s house and set it on fire” – it was a short message from the office.

In the evening, Sri Lankan Parliament Speaker Mahinda Jaap Abiorden said in a televised address that he had informed President Gotaba Rajapaksa of the arrangements made during the meeting of the leaders of the parliamentary blocs. The chiefs wanted Rajapaksa to step down.

The president was supposed to agree to the proposal. The date for the handover of power was set for July 13.

Protesters in the Republican Palace

Hours earlier, the demonstrators broke through the security cordon protecting the presidential palace and stormed inside. Pictures of dozens of people by the pool in a luxurious mansion appeared on social media, along with expensive cars that were in the garage.

With a population of 22 million, the island is in serious crisis. People are suffering from a shortage of currency, which has limited the import of fuel, food and medicine. As a result, the country fell into the biggest collapse in several decades. Sri Lanka’s inflation rate is currently 55%.

The association blames President Gotaba Rajapaksa for the current situation, against which peaceful demonstrations took place already in March. However, the situation did not improve, and social feelings eventually exploded.