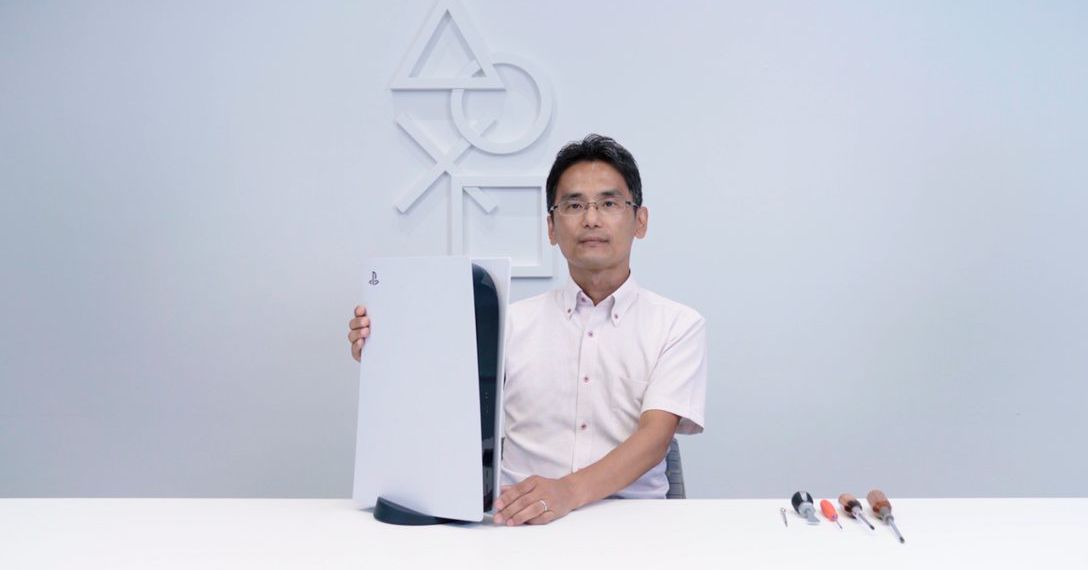 Sony posted a seven-minute video for the PS5. The teardown gives us our best look at the PS5 yet, including all of its internal bits and how the sides can be removed. Yasuhiro Ootori, head of the PS5’s mechanical design department, leads the disassembly in Japanese, indicating that the entire back of the PS5 is designed to get air out of the console.

Sony uses a base on the PS5 that is screw-on when directed vertically and clipped to the side of the console if you plan on using it horizontally. The white panels on both sides of the console are easily removed by lifting and removing them. This reveals the main cooling fan on the top of the PS5, which can draw air from either side. Sony also uses two dust catchers that can be emptied through two holes.

Disassembly also gives us a first look at expandable storage via the M.2 slot that can be accessed by simply removing the side panels. PS5 owners will be able to purchase PCIe 4.0 compatible drives to upgrade their next-gen console storage.

The remainder of the Sony’s disassembly video also reveals how serviceable this controller is. Sony has clearly designed this carefully to make this easy to repair and serviceable. The Blu-ray drive is easy to remove, and the processor, memory, and SSD partitions are easily accessible. The 350W power supply can also be removed easily.

The cooling fan Sony uses inside the PS5 has a large diameter of 120mm, thickness of 45mm, and double sided air intake. Sony also uses a heatsink to aid in cooling, with airflow that Sony says “should achieve the same performance as a vapor chamber”. The PS5 also uses liquid metal for its cooling performance, which should also help reduce the fan noise typical of the PS4.

Sony says it has spent two years working on this liquid metal cooling, with various tests to ensure it is a stable, long-term solution. It is a thermal conductor located between the SoC and the heat sink and should greatly assist with the cooling performance.

Early Hands-on videos and impressions It was suggested that the console ran quietly and coolly during the limited gameplay that Japanese publishers and YouTubers were able to try recently.

“We also highlighted the mechanism in the video that we incorporated into the PS5 controller to make the playback sounds quieter,” Explains Masayasu Ito, Head of Hardware Engineering and Operation at Sony Interactive Entertainment. After an extensive and complex trial and error process, we were happy with the end result and couldn’t wait for our fans to put their hands on the PS5 console and ‘hear’ it for themselves.

Sony’s PlayStation 5 console will go on sale for $ 499 ($ ​​399 for the digital version) in the United States on November 12, with its launch in Europe and other parts of the world on November 19.