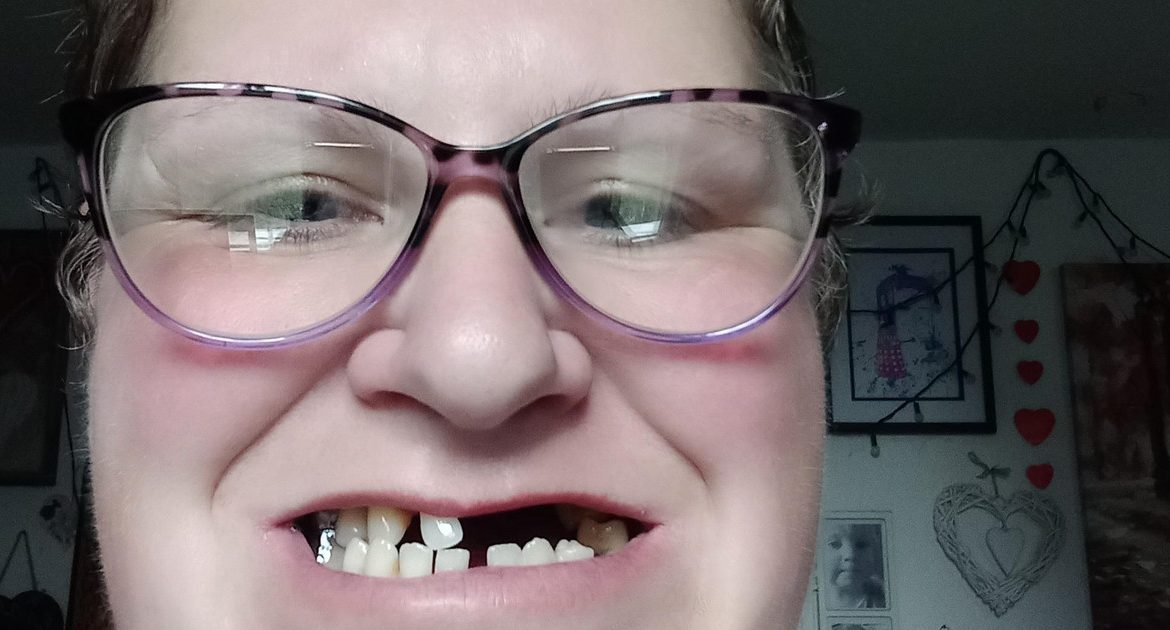 Danielle Watts, 42, who lives in Bury St Edmunds, Suffolk, had to turn to a DIY approach to alleviate her suffering. She could no longer afford the terrible toothache, and could not afford private treatment.

As the 42-year-old said in an interview with British media, everything fell apart after her former doctor suddenly closed the clinic. For the past six years, the woman has been trying to find another NHS dentist who would agree to see her and her two children, 12-year-old Oscar and 8-year-old Elisa.

But she has heard everywhere that there are no public service places, and she cannot afford private treatment. The real problem came when her teeth started cracking and she was in constant pain. – In the past few years, I have been suffering from severe gum disease and My teeth started to fade one by one says the woman.

The 42-year-old was taking painkillers every day, but despite desperate calls to dentists, she kept hitting the wall. Nobody wants to see new patients on the NHS!

She pulled out 11 teeth on her own

In an act of desperation, the British chose to rely on themselves rather than wait motionless for infection. Tooth extraction at this stage of periodontal disease turned out to be quite simple.

– I squeeze them and they come out. I’ve lost 11 so far And I think I would lose them all at this rate,” explains Danielle. – I’ve tried really hard to find an NHS dentist, but there’s no one there. It’s really horrible, but I can’t do anything, he adds.

A mother of two has particular problems getting free help, as Suffolk is one of the hardest-hit areas of the UK with a shortage of dentists. As long as she regularly attended check-ups at the previous clinic, she rarely had problems with her teeth.

– I knew they had problems because they kept canceling visits. Then I got a message that they would be closing their doors. I didn’t realize it would be so hard to find another dentist until I started looking for another dentist, the woman explains.

Dental promise needle to treat purulent infections in the gums

Ms Watts said her teeth started deteriorating two years ago, forcing her to take painkillers daily. “My gums receded and I suffered from bone loss, exposing the roots of my teeth,” she says. However, self-removal of a dead tooth was not all she had to do.

“I had to use needles and big toothpicks to puncture abscesses from a gum infection, then rinse my mouth with salt water,” she recalls. Eating is very painful for me and I have to cut food into small pieces. Even eating a banana is painful and I can’t drink a cold drink because it makes the pain worse – confirms the 42-year-old.

There were times when the pain was so severe that she had to call the emergency number. – They took my details and the dentist called me again. I explained that I was in severe pain and had severe gum disease. But since my face wasn’t swollen, I wasn’t serious enough to see me, he concludes.

Now you feel helpless. Her life is pain, fear and permanent shame. He has problems communicating, because he loses his teeth and becomes very weak. He is also worried about his children’s teeth. We try to take care of our teeth and we don’t have soft drinks at home. The 42-year-old says I just feel like the state has abandoned me.

The local shortage of dentists

The UK is said to have a shortage of dentists accepting NHS patients due to staffing problems and rising operating costs.

Dentists argue that the low rates they receive from the NHS and contract requirements, including financial penalties, make it difficult to provide treatment in a cost-effective manner.

British regulations have led to more practice of switching to lucrative private business and refraining from accepting new NHS patients.

The problems increased after the Covid-19 pandemic and BrexitThis has led many dentists from outside the UK to return to their home countries.

See also  Do the Poles trust the institutions of the European Union?
Don't Miss it United States of America. He became the youngest professional athlete. You won’t believe how old he is – o2
Up Next The end of FIFA after 27 years?! The game developers want to change the name. Impact on a mathematical application