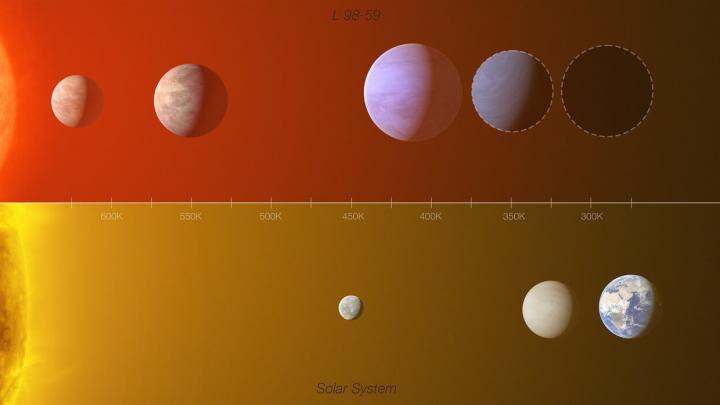 Scientists using the VLT telescope were able to determine the presence of rocky planets in the nearby planetary system, one of which is no more than half the mass of Venus, and the other is most likely the so-called oceanic world, announced the European Southern Observatory (ESO).

Astronomers are working to improve ways to search for and study planets in extrasolar planetary systems. Currently, more than 4000 so-called exoplanets. Among them, the most common are balls of rock with masses and sizes similar to Earth, preferably in the so-called habitable zone (habitable zone), the area around a star where there are conditions for the presence of liquid water on the surface of the planet.

This category of discoveries includes the latest research on the L98-59 system, located less than 35 light-years away. In 2019, thanks to the American Transiting Exoplanet Satellite (TESS), it was possible to detect the presence of three planets in this system. Now evidence of a fourth planet has been shown. There is also evidence about a possible fifth object. In addition, the characteristics of three previously known planets have been determined.

The results of VLT observations indicate that three of the planets may have water in their inner atmosphere or atmosphere. The two stars closest to their star contain a small amount of water, while the third star can have up to 30% by mass. So we will deal with the ocean world. The fourth (newly discovered) planet has a mass of at least 3 times that of Earth and an orbital period of less than 13 days. The hypothesized fifth globe has a mass of 2.5 times the mass of Earth and orbits its star in 23 days.

The orbital periods seem very short compared to the solar system, but the red dwarf L98-59 is a much smaller and much smaller red dwarf than the Sun. Therefore, there may be a possible fifth planet in the habitable zone.

This technique was used to make observations with the VLT telescope. In contrast, TESS telescope observations used a different technique, called the transit method. In the case of the first method, the movements of the star are measured along the line of sight, because if a planet revolves around it, the gravitational force of the planet causes the star to come a little closer and move away from us. Such motions cause measurable linear shifts in the star’s spectrum. In turn, the method of transit is based on the fact that if the planet revolves around the star, the orbit of which is positioned relative to us so that there are transverse transitions of the planet against the background of the star, then we will observe a slight but regular fading of the star’s light.

Transits can detect the presence of a planet and measure its size, but the mass cannot be determined. For this, observations using the radial velocity method are needed. On the other hand, knowing the radius and mass, we can calculate the density, the knowledge of which is necessary for the formulation of hypotheses about what the planet can consist of.

See also  Hope for a gene therapy for hereditary deafness

The L98-59 system is likely to be a target for observations with future telescopes, such as NASA’s James Webb Space Telescope or the European Space Agency’s Very Large Outer Space Telescope (ELT).

The research of the international team was led by Olivier DS Demangon of the University of Porto (Portugal). The results were published in the Journal of Astronomy and Astrophysics. (PAP)

Don't Miss it Tour de Pologne 2021: overall classification after stage 6
Up Next Is this the end of your friendship? The famous YouTuber makes a surprise in his latest video [wideo]