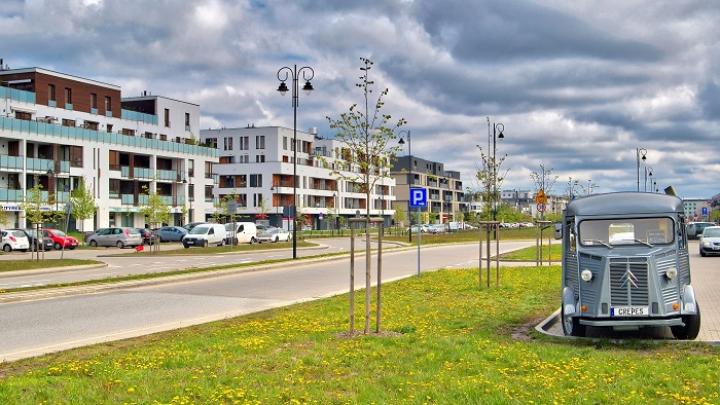 “Widely dispersed concrete, that is, excess concrete in city space, is the wrong direction” – alarm scientists from the Faculty of Geosciences and Spatial Management at Nicolaus Copernicus University in Touro, who studied local spatial development plans (local spatial development plans) developed in 39 cities Polish in the flexible context of more than 100,000 residents.

a research results Scholars are informed by the university.

Resilience is a relatively new concept, the essence of which is the conception of the city as a system of connected vessels, where each component of the city influences the others and ultimately the city’s resistance to crises.

After the communist period, we choked a bit with the transformation and the possibilities it brings. The effects of this are visible all around us. We do not treat space as a common good, but everyone builds what he likes – with cheerful, cheerful colors. We lack a little technical and spatial education

“In theory, we know very well the direction our cities should go, we realize that the future is green, but when it comes to implementing our plans, we often do not treat the surrounding space as a common good. We do not realize that the actions taken, for example, the spread of concrete, That is, the excess concrete in the city area, is the wrong direction ”- stressed Dr. M. Krzysztof Rojatka, a. UMK of the Department of Urban Studies and Regional Development and M. Tomasz Starczewski and Mateusz Kowalski, second year student in spatial planning, adapted from the university website.

It is important – scientists emphasize – that at the stage of creating local spatial development plans (SLDP plans), allocate the appropriate space for rows of trees, because they protect us, among other things. against heat. The fact that we have more and more problems with water shortage should lead to designing ponds in green areas, which will collect and gradually dispose of excess rainwater during dry spells.

“It must be remembered that the runoff of rainwater during heavy rains, especially on a roof made of concrete, is enormous. When designing new roads and buildings, let us leave space for greenery, which also stores water, let us allow photovoltaic panels to be formed on the roofs, because they also enhance Urban resilience “- advises scientists.

In the law of March 27, 2003 on spatial planning and development, in studies of conditions and trends of spatial development and in other strategic documents, there are a number of provisions related to resilience, which refer to the development of urban resilience.

“The most important conclusion arising from our analyzes presented in the article is the fact that flexibility is somehow included in planning and strategic documents, the problem arises when we begin to implement the provisions of these documents in practice. Re-interpretation, excessive interpretation of provisions and pressure of different groups: residents, administrators and developers “- emphasizes the professor. turnpike.

According to scholars from Toruń, when designing urban space, one must strive to maintain a balance between economic, spatial, social and environmental elements.

“Therefore, part of the land should be preserved for residential buildings in the development plan, some of which are biologically active areas, others are intended for production and services” – the scientists emphasized. And with all this, one must remember, first of all, about man. “In the work of urban centers, the most important thing is the connection between physical and social space, because there is no city without inhabitants” – adds the engineer. Starczewski.

Scientists say that it is impossible to identify a typical city in Poland with an excellent local development area. However, they emphasize that in some centers there are excellent examples of good solutions. The area is developed according to the principles of urban resilience, for example, the old Warta river course in Pozna. Among the negative examples, in turn, they give the settlement in Warsaw and the buildings erected in protected areas or located in the buffer zone of areas with high landscape or ecological values.

“When a question is asked about the ideal plan, it is reminded of the example of the Nowe Żerniki property in Wrocław” – says the professor. turnpike. In his opinion, the Poles after the communist period were “a little suffocated by the transformation and the opportunities it brings.” The effects of this are visible all around us. “We do not treat space as a public good, but everyone builds as they like – with cheerful and playful colors. I think we are somewhat lacking in artistic and spatial education ”- notes the scientist.

According to the researchers, “In the Polish space, the fencing of apartment complexes is also a very big problem, we are dealing with significant isolation (creation of enclaves of buildings for a particular social group), which also has a negative impact on the functioning and aesthetics of the space of Polish cities, because, inter alia matters, divides people into “from the residential area” and those “outside” and creates barriers in the public space.”

These scholars introduced the concept of urban resilience and its implementation in the planning process in the largest Polish cities, taking into account the transformational perspective, in the article “Urban flexibility in spatial planning of Polish cities – true or false? A transformative perspective”, published in “Land Use Policy”. The first theoretical and empirical attempt to analyze and evaluate the planning situation in Poland after 1989 in the context of the concept of urban resilience.

They noted that “spatial planning in Poland has a good legal framework for implementing urban resilience, but achieving full implementation of the discussed concept requires modifications at the executive level in terms of planning practice.”

As they wrote in the article, “In Western European countries, if there is no approved local plan for a particular area, then you can’t build anything there at all.” On the other hand, in Poland, it is possible to erect buildings on the basis of a decision on development conditions, and this, unfortunately, has a negative impact on the shape of Polish space – both in cities and outside.

“In Poland, the coverage of the plans was too small, which could paralyze construction and development, so the legislator decided to make decisions on the conditions for land development. Therefore, we still have a long way to go in a conscious, responsible and forward-looking space,” says Mateusz Kowalski.

Don't Miss it Wimbledon: Ursula Radwiska stopped in the crucial qualifying stage. American appeared for the first time
Up Next Exchange rates: the pound before an important test, the zloty gains less than other currencies in the region (Currency Comment 06/24/2021)