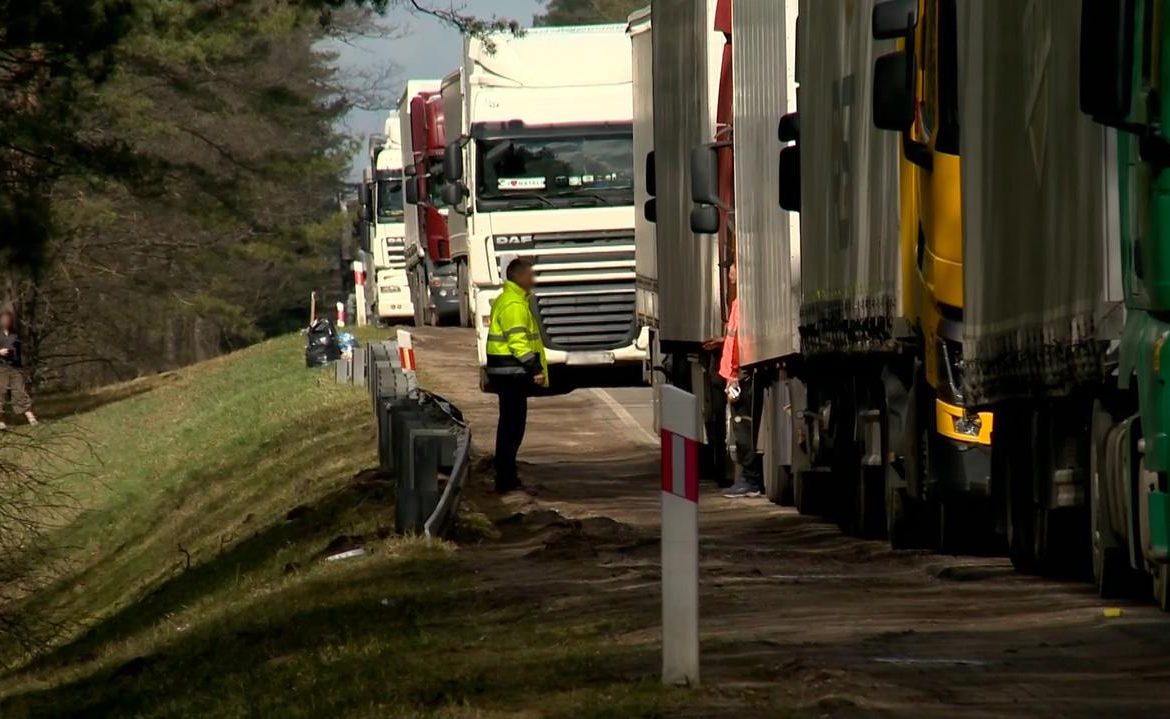 Midnight from Saturday to Sunday is the end of the transitional period related to the prohibition of road transport in the territory of the European Union of carriers from Russia and Belarus in the framework of economic sanctions in the wake of the Russian aggression against Ukraine. On Saturday evening, the waiting period for trucks for clearance at the Polish-Belarus border crossing in Bobroniki was 28 hours, and there were about 500 trucks in the queue. On the other hand, from Friday to Saturday from midnight, as part of a counter-sanction, the movement ban imposed by Belarus applies to vehicles registered in the European Union.

The end of this period means that trucks with Belarusian or Russian registration numbers will be able to cross the border only when transporting postal services as part of the universal service. The exception also applies to goods passing through the European Union between the Kaliningrad region and the rest of Russia, provided that the transportation of such goods is not otherwise prohibited.

A queue of trucks before crossing in Bobruniki

The Podlasie National Tax Administration reported that on Saturday evening, the waiting period for trucks for clearance at the Polish-Belarusian border crossing point in Bobroniki was 28 hours, and there were 509 trucks in the queue. It was still 42 hours in the morning, and 750 trucks stood in line. The length of the line was 16 kilometers.

As made clear by KAS, truck drivers who find themselves in the queue by midnight will not bear any consequences and will be able to leave the EU, provided they do not carry sanctioned goods. Transport companies from Russia and Belarus wishing to queue after midnight risk fines under the Road Transport Act for carrying out transport in violation of the obligations or conditions of road transport. KAS announced that the car will not leave the European Union with cargo, and it will have to be unloaded. For example, the goods will have to return to the place of loading or transfer to the vehicles of carriers that are not prohibited from the European Union.

“By imposing restrictions, the Republic of Poland took into account the possibility of the governments of the Russian Federation and the Republic of Belarus introducing counter-sanctions against road transport companies from EU member states” – emphasized the Polish Ministry of Infrastructure.

Belarus sanctions against the European Union

Belarus decided to impose counter-sanctions. According to the information on the website of the Belarusian Ministry of Transport and Communications, from Saturday, starting from 0.00 am, EU-registered vehicles – cars and tractors – are prohibited from moving across the Eurasian Customs Union border into Belarus. BETA noted that this was a response to the EU sanctions.

The ban does not apply to tractors passing through designated border crossings in order to carry out cargo transportation operations or to improve a semi-trailer. Under this exception – as explained by the Polish MI – “EU registered cars and trucks enter Belarus through border crossings only in specially designated places for loading / unloading and connecting the trailer to another truck.”

The ban will not apply until April 23 for vehicles registered in the European Union that entered Belarus until April 16 this year. Additionally, the restrictions do not apply to vehicles carrying postal items or live animals.

“Taking into account, the Ministry of Infrastructure advises Polish citizens and road transport workers not to travel to Belarus, and to those who have cars in Belarus, recommends to return to Poland immediately” – confirmed Saturday’s statement.

Don't Miss it Media: Joe Biden will not fly to Kyiv, but the Ukrainian Prime Minister will be in the United States
Up Next The iPhone 14 Pro stands next to the iPhone 13 Pro. what’s new?