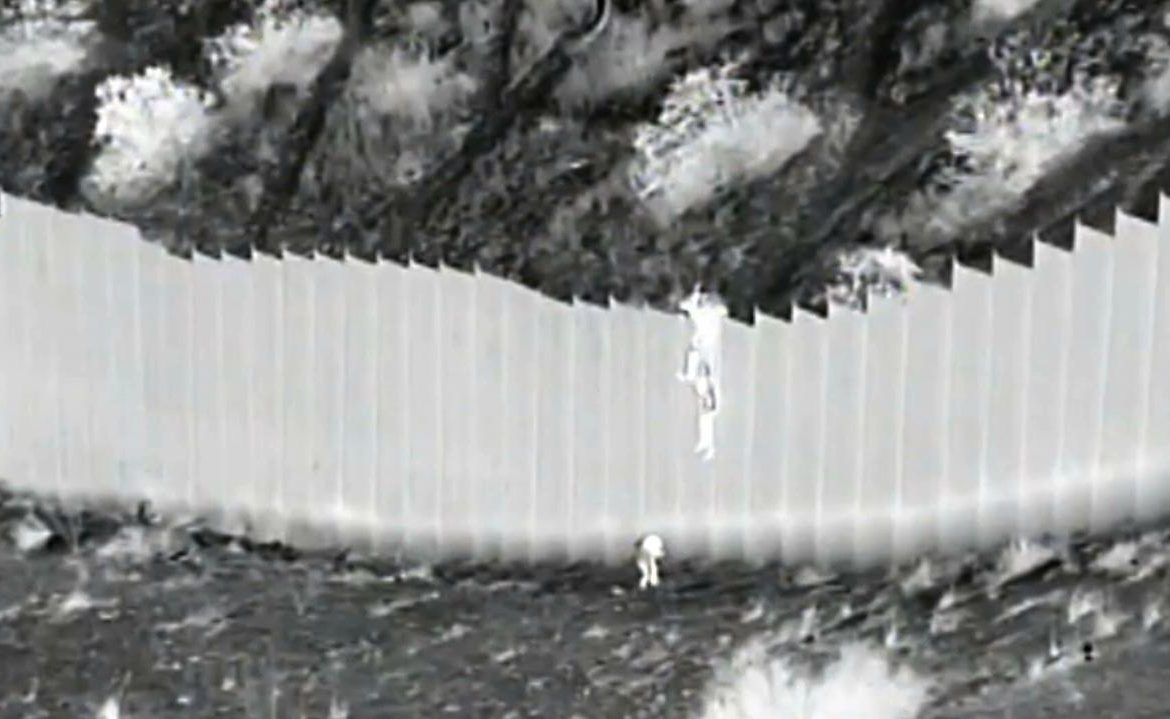 U.S. Border Police surveillance cameras have captured smugglers who threw two young girls over a four-meter-long border wall in New Mexico. Sisters from Ecuador have been taken care of by the American authorities. The United States expects more than a million immigrants to arrive at its border with Mexico this year.

The night video clip shows the character of an alleged smuggler from Mexico, sitting on a four-meter-high border wall, lowering two girls one by one to the ground. Then the man runs away. US border guards watched this scene live. The journal found that the sisters arrived from Ecuador. Girls are 3 and 5 years old. After being examined in the hospital, the children were transferred to a temporary immigration center.

In recent weeks, the flow of illegal immigrants across the southern border of the United States has exceeded the capacity of border authorities: youth centers are overcrowded. There are more than 4,000 minor immigrants who have crossed the border without their parents or guardians.

“Do not send your children on this treacherous journey.”

In mid-March, President Biden pleaded with immigrants not to come to the southern border of the United States. It is becoming more and more dangerous, as hundreds of children enter the US every day without parental or adult care. The US authorities are aware that their parents and guardians are intentionally sending them to cross the border on their own. They hope to be treated more kindly than adults.

White House spokeswoman Jennifer Psaki renewed the president’s call on Thursday. We are focusing on sending a clear signal to the smugglers and the entire region: This is not the time to come to the United States. Do not send your children on this treacherous journey, Psaki said.

As she explained, “smugglers are taking advantage of these people’s vulnerabilities.” There are several things that must be done to get to the root of the problem. We care most about the safety of these children. She said the border guards who rescue minors here deserve our gratitude.

More than a million immigrants are on the horizon

US border officials expect more than a million immigrants to arrive at the Mexican border this year, an increasing challenge to President Joe Biden’s administration.

If the number of migrants reaches one million, this may reflect a similar increase in the number of border crossings as in 2019 under President Donald Trump. At that time, approximately 978,000 immigrants were arrested after moving to the United States. Reuters reports that in February, US border authorities arrested nearly 100,000 immigrants – the most in a month since mid-2019.

“More immigrants tend to cross the border between April and June,” US Border Patrol deputy chief Raul Ortiz told reporters on Tuesday. We’re really starting to see more days, more than 6,000 arrests after crossing the border – he explains. “So I expect that our Border Patrol officers will face more than a million people this year,” he added.

With a camera in the center for immigrants

US authorities allowed several journalists to meet with officials and tour the crowded immigrant facility in Donna, Texas, after media demanded access to the facility, Reuters reported.

Tens of thousands of Central American migrants have made their way to the US-Mexico border in recent months. Reuters notes that the increase in the number of immigrants is driven by the poor economic conditions in the region, the devastating hurricanes that struck the region last year, and among the immigrants hoping they can remain in the United States, while President Biden backs down on Donald Trump’s restrictive policies outside.

During their visit to the facility in Donna, reporters saw a place reserved for young children who sat in a kindergarten, used coloring books and watched a movie. Escamela explained that children under the age of 3 also sleep in this place because the other places for unaccompanied children were very crowded.

Homeland Security Secretary Alejandro Mayorcas said officials are “working around the clock” to quickly move children out of overcrowded makeshift shelters on US border guard buildings that do not fit the role.