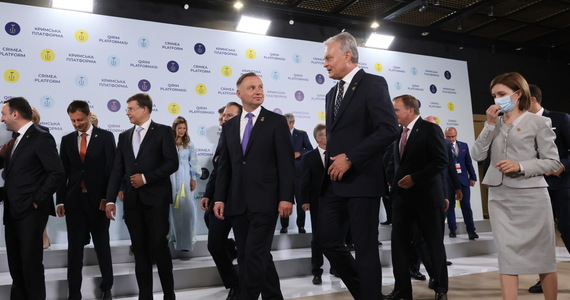 As we read in the statement, “We have been dealing with mixed attacks on the eastern borders of the European Union and NATO since June.” “Unarmed third-country nationals are used, among whom the number of illegal border crossings from Belarus is increasing. This is not a migration crisis, but a hybrid process orchestrated politically by the regime of Alexandre Lukashenka, with the aim of diverting attention from the repeated violations of human and civil rights by this order ”- stressed the heads of the four countries

The signatories to the statement added, “We condemn this unacceptable behavior. False pressure and reckless actions will not change our collective policy towards the crisis in Belarus.”

They also wrote that they appreciate the “solidarity and political and practical support of our partners in the European Union and NATO allies in stopping hybrid attacks.” The two presidents stressed that “the efforts of the European Commission and EU agencies to stop illegal immigration are very important. Moreover, we strive for permanent cooperation and durable solutions with Iraq and other countries in order to stop the malicious practices of human smuggling.”

The Prime Ministers of Poland, Lithuania, Latvia and Estonia emphasized in the statement that “the current crisis on the border with Belarus was systematically planned and organized by the regime of Alexander Lukashenka.” They also called on the Belarusian authorities to cease activities that escalate tensions.

The statement published on Monday came on the heels of the video conference held on Saturday, at the initiative of Prime Minister Mateusz Morawiecki; It was attended by the Prime Ministers of Lithuania Ingrida Simonet, Latvia Arturs Karenz and Estonia Kaja Kallas. The topic was the situation at the border with Belarus, including the influx of immigrants to Europe due to Belarus.

“We, the Prime Ministers of Lithuania, Latvia, Estonia and Poland, express our grave concern about the situation on the borders of Lithuania, Latvia and Poland with Belarus. It is clear to us that the current crisis was systematically planned and organized by the regime of Alexander Lukashenka. The use of migrants to destabilize neighboring countries is a clear violation of the law international and classifies as a mixed attack against Lithuania, Latvia and Poland, and thus against the entire European Union,” read the statement published on Monday on the website of the Prime Minister’s Office.

The Heads of Government of the four countries expressed their appreciation for the commitment of the European Union and its Member States to jointly defend the Union’s external borders. They also stressed that unity and immediate diplomatic, financial and technical support from the European Union and its Member States is essential in order to respond effectively to the challenge posed by the Lukashenka regime. Moreover, they noted the need to use all available diplomatic and practical means to “cut off new routes of irregular migration as soon as possible.”

“In the European Union, we must take advantage of this situation to rethink our approach to defending our borders. We firmly believe that protecting the external borders of Europe is not only the responsibility of individual member states, but also a joint responsibility of the entire European Union. and making sure that sufficient additional funding is secured immediately,” the statement read.

The Crimean Platform Summit, a Ukraine-initiated project dedicated to Russia-occupied Crimea, began Monday morning in Kiev. The summit is attended by representatives of more than 40 countries and international organizations, including President Andrzej Duda.

The Polish President, who has been in Ukraine since Sunday, will take part in the inaugural summit of the Crimean Platform after a ceremonial welcome by the President of Ukraine, Volodymyr Zelensky.

It is a project initiated by Ukraine and devoted to the problems of Crimea, which has been occupied by Russia since 2014. The first meeting of this format will be held on Monday. Several heads of state and government and representatives of international organizations were invited to participate in the talks.

“The Juveniles”: “The vaccination against Covid-19 is a labor of love.” Pope Francis’ appeal
polsat news

See also  A Somali woman near the Polish border? "Something stinks a lot in here."
Don't Miss it Heiko Maas: Germany is talking to the United States and Turkey about continuing the evacuation from Kabul after August 31
Up Next It’s time to give up hope. iPhone 13 without fingerprint reader