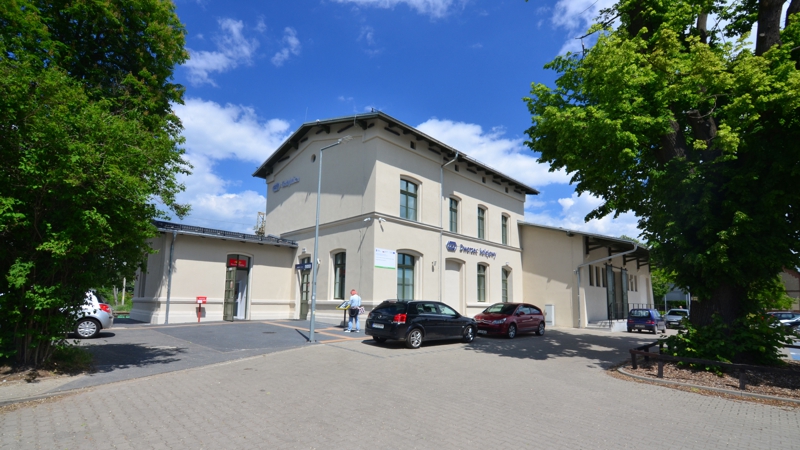 Historic, but with new solutions that increase the comfort of travelers, provide facilities and security, and with a completely redesign of the space, taking into account the needs of the local government – the railway stations in Kobylnica and Pobiedziska, as we are talking about, just opened after reconstruction.

Both buildings are historic buildings that were renovated under the Railway Station Investments Program 2016-2023 funded by the European Union from the Infrastructure and Environment Operating Programme. It took almost two years to rebuild the stations at Pobiedziska (1872) and Kobylnica (1914). During this time, they underwent a major transformation, respecting their historical character.

– The railway stations of Kobylnica and Pobiedziska are other historic buildings that have undergone a major transformation, bringing together history and modernity. Thanks to such investments, railways are changing for the better, becoming an increasingly interesting alternative to individual transport. On the other hand, railway stations have become important places for the local community – says Maciej Małecki, Minister of State at the Ministry of State Assets.

– The opening of stations in Pobydzyska and Kobelnica is another element of the great modernization of Polish Railways. Thanks to this, residents of other cities of the Greater Poland Province will have access to a safe and comfortable railway infrastructure. I hope that the modern buildings of the historic stations will become a masterpiece of both cities and community centers and make it easier for passengers to travel by rail. All this thanks to the Railway Stations Investment Program, according to which the Polish government will allocate more than 2 billion PLN for the modernization of nearly 200 stations by 2023 – says Andrzej Bittel, State Secretary at the Ministry of Infrastructure.

– A year ago, we opened two new passenger terminals at Pobiedziska Letnisko and Biskupice Wielkopolskie, which we built in the innovative system terminals formula. Today we open two more, this time historic, but equally modern. I am convinced that they will serve the inhabitants well, not only as places from which to set out on a journey, but also as a meeting place for culture – says Irenos Malani, Board Member of PKP SA

See also  Economic Forum in Karpacz - a space for dialogue

In Kobelnica, the facade of the building has been renovated with architectural details. It has restored its light color, which matches the woodwork of the green windows and doors, as well as the dark ceiling coverings, which have been recreated in the historical style. On the facade in detail, it is worth mentioning the illuminated signs with the name of the station (from the side of the quay) and the inscribed railway station (from the side of the city). The building has also acquired new night lighting that emphasizes its shape.

The interior design has also undergone many changes. The passenger service center is located in the terminal hall, which is also a waiting room. It is designed in a modern way. The gray floor is accompanied by walls in gray and beige tones, lined with large-size panels that perfectly imitate natural stone, and a white ceiling with square modern light fixtures. Inside, travelers will find seats, showcases with timetables, electronic train arrivals and departure boards, and a clock and defibrillator. Toilets are also located near the hall located in the central part of the building. There is a post office in the eastern extension of the station, while in the western region there is a village hall with an area of ​​more than 100 square meters.

After the opening last year of the modern Pobiedziska Letnisko railway station, which was built according to the innovative railway station formula, the city’s old station has regained its splendor. The facade of the building with brick architectural details as well as olive green, reconstructed according to the historical style, the woodwork of the windows and doors has undergone renovation. New illuminated signage with the name of the station, a patterned railway station, and lighting fixtures highlight the building’s body with light at night.

A lot of changes have taken place within the station. The passenger service area consists of a modern waiting room. There we can find benches, interfaces with timetables, electronic train arrivals and departure boards. The waiting room is also equipped with modern lighting and an automatic pacemaker. In the immediate vicinity there are ticket offices and toilets. The remaining space on the ground floor and first floor has been leased by the local government which plans to open a library there.

Rebuilding the stations in Kobylnica and Pobiedziska is not only about improving their aesthetics and appearance and giving them new functions important to the local community, but also investments in station availability, environment and safety.

Both stations have provided a number of solutions that make them more suitable for people with disabilities. Architectural barriers were eliminated and improvements were made, such as: paths with areas of interest, Braille signs, elevators or contrasting interior colors. The station’s toilets have also been adapted to suit the needs of people with reduced mobility.

Investments have also become an opportunity to offer environmentally friendly solutions. The buildings were insulated from the inside and the windows and doors were replaced with ones with a low heat transfer coefficient. In addition, they have installed heat pumps, energy-efficient LED lighting, and modern Building Management Systems (BMS) that optimize electricity, heat and water consumption. Makes railway stations green. On the other hand, security in the stations and their surroundings will be ensured by modern systems: monitoring, access control, burglary and assault signals.

The reconstruction of the stations at Pobiedziska and Kobylnica cost PLN 6.88 million and PLN 5.71 million, respectively. The investor is Polska Koleje Państwowe SA. The building contractor was Agrobex Sp. z oo, and the design documents for the reconstruction were prepared by an architectural studio WK Architekci From Swarzdz.

More news from the municipality of Swarzędz and its vicinity can be found here.

Don't Miss it Urszula Radwańska returned to Nottingham. Pole with doubles final in Turkey
Up Next Princess Charlotte showed off her character during the show