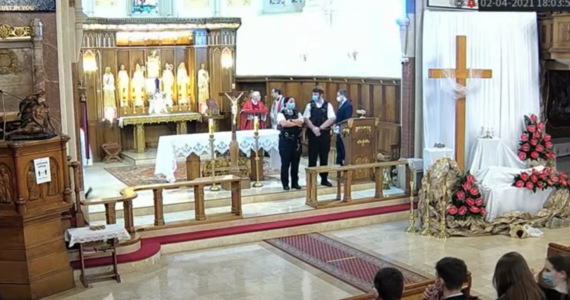 During Good Friday mass at the Polish Church of Christ the King in Bilham, south London, police entered the church and boycotted the mass, the UK website reported. One of the policemen who arrived at the scene informed the worshipers that the epidemiological restrictions had been broken and ordered them to leave the church on pain of a fine.

A video posted by Great Britain Online shows a priest of Christ the King Diocese approaching the microphone and informing the crowd that someone has called to file a complaint with the police. The attorney also asks the cops to explain the reason for boycotting the service despite following UK rules In places of worship.

The policeman goes to the pulpit and explains that due to the breach of closures, parishioners must leave the church, and if they do not, they will be imposed on anyone who remains in the church. Fine of 200 pounds.

Then you can see how the pastor – the father. Alexander Dusk – explains something to Father Parish Priest. Bishop Władysław Wyszadów, after which the parish priest tells the faithful to leave the church.

The priests also talk to each other that they will complain about the police patrol decision.

“The officers came to the church and found a large group of people there. Some of them did not wear masks and certainly did not respect the principles of social distancing,” said the statement issued by the local police after the incident. She added that, given the particularly high risk of transmission of the coronavirus in closed rooms, the officers decided to intervene.

See also  Kim Jong Un expelled the official from the economy. “Plans have failed in nearly every sector” | News from the world

Statement by the Metropolitan Police about intermittent mass at the Polish Church in London: – Some people weren’t wearing masks and “clear” did not follow social distancing rules – Police thought it would be dangerous to continue serving pic.twitter.com/38Gp0ftktJ
JakubKrupa
April 3, 2021