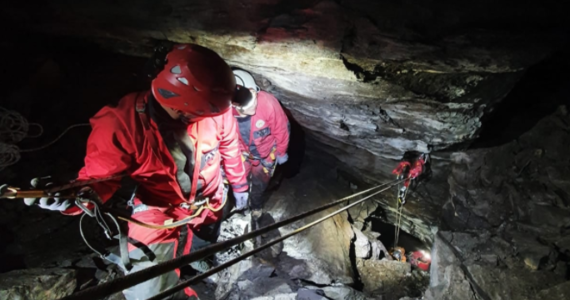 Three Poles were stuck in the Lambrecht Cave in the municipality of St. Martin by Louvre in Austria. A rescue operation has been underway there since Thursday evening. The cave was flooded by melting snow, cutting off the escape route for the speleologists.

The Poles who got stuck in the cave on Thursday evening are professional and well-equipped – confirms Gernot Salzmann, in charge of rescue operations, from the Austrian Mountain Service.

At least one of them knows the topography of the cave well.

Scientists entered the cave to study and document its tectonic structure.

At the moment, there is no contact between the rescuers.

The wave breaks the windows, the water breaks out on the deck. Exciting shots from the shuttle [WIDEO]

Polish speleologists were stuck in the cave after the snow melted, which had inundated the entrance.

“The water collects in a cavity you can imagine like a siphon,” Salzman explains. He also adds, at the moment lifeguards can only rely on the fact that the water will recede. They expect that to happen this afternoon.

Just in case there were cave divers ready to supply the Poles with food and heating materials at any time.

Lambrechta Cave is about 51 km long, making it one of the largest cave systems in Europe.

In 1993, speleologists from Poland discovered another entrance at 2,178 meters, which also means that Lambrechta Cave is currently the largest gorge cave in the world.

Similar incidents occurred frequently in Lambrecht Cave. They were most popular in the part open to tourists, which is open in the summer months.

In August 2016, after heavy rain, seven people – including two children – were trapped in the cave after the water level rose. There was no immediate danger to life, but the tourists had to wait in the cave until the water receded.

In August 2013, 26 people were stuck underground for several hours. Also at that time, the low entrance was flooded by rain. Families or individuals, mostly from Germany – could not get out and had to wait in the cave until the water dried up. Also in June 2002, the stream running through the cave began to rise rapidly and many visitors were trapped by the water. The 62-year-old fell and was injured while trying to reach the exit despite the flooded road. In the evening, all visitors can safely leave the cave.

Lamprecht Cave – located in the municipality of St. Martin near Lofer – Has an early warning system that sets off an alarm if the water level in the cave becomes dangerously high. Visitors usually have enough time to go to the cave exit.

Don't Miss it US Defense Secretary Lloyd Austin in Poland. Conversations with Marius Bosachtak, Andrei Duda, Meeting with Soldiers
Up Next A Tale of Two Sons for free on the Epic Games Store