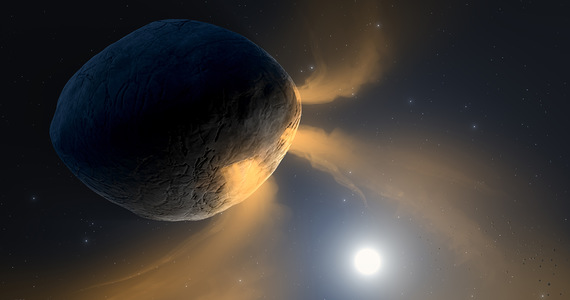 (3200) Phaethon glows as it approaches the sun, although there are no ice stores that would naturally cause this effect as sunlight evaporates and scatters. Ice-covered comets get brighter when heated, not rocky asteroids, which is why Phaethon has long been a mystery to astronomers. New research suggests a solution to this anomaly.

– Phaethon is an interesting object that becomes active as it approaches the Sun. We know it’s an asteroid and a Gemini source. It has little or no ice, so we were intrigued by the possibility that sodium, which is relatively abundant in asteroids, is the driving force behind this activity, said Joseph Masiero, an astronomer at Caltech.

Phaethon takes 524 days to complete its orbit, during which time the Sun heats the asteroid to a temperature of 777NSC – Any ice on an asteroid would have burned up long ago, but scientists have used computer models to prove that sodium may still be present.

This heating can explain not only the asteroid’s brightness as sodium seeps through cracks and fissures in the crust, but also the ejection of rock that can be seen from Earth in the form of Geminid rain in December each year. Phaethon’s weak gravitational force makes it easy to throw debris into space.

We know that a meteorite called Geminids is relatively low in sodium due to the light it emits as it burns up in Earth’s atmosphere. Experiments were conducted on parts of the Allende meteorite, which fell in Mexico in 1969 and may have originated from an asteroid similar to Phaethon. When heated, the fragments’ behavior confirmed that sodium could indeed evaporate and be released from the asteroid at temperatures likely to occur in Phaethon.

“This temperature is close to the point where sodium evaporates from the rocky elements of the asteroid, so we simulated the effect of this ‘daytime’ heating on Phaethon – its three-hour rotation period. When comparing the minerals of the samples before and after our lab tests, sodium was lost while the other elements remained.” This suggests that the same could happen on Python and appears to agree with our modeling results, added Yang Liu of NASA’s Jet Propulsion Laboratory (JPL).

Phaethon’s observations show that the distinction between rocky asteroids and icy comets may not be as clear as previously thought. The results of the experiments could provide scientists with useful data about other asteroids passing near the sun.

Back from space. Soyuz returns to Earth
France Press agency

Don't Miss it The dog traveled nearly 400 kilometers to get home. Lost during a vacation trip | world News
Up Next F1. Lewis Hamilton puts pressure on Valtteri Bottas. Russell’s result does not change anything.