One of the best public spaces in Pomerania is located in Gdynia and harmoniously connects pedestrians, cyclists and cars. The Woonerf, established in 2019 on a portion of Abrahama Street, was awarded in the “The Best Public Space of the Pomeranian Voivodeship 2021” competition.

Although it has been more than two years since the official opening of the first Gdynia facility Residential area – Street converted into pedestrian and cyclist space dramatically slowing vehicular traffic – This project continues to change the way people think about commuting and gain recognition outside the city limits.

Part rebuilt in 2019 Abraham Street It has already been set as a model by, inter alia, Polish Town Planners Association I Polish Towns AssociationIt has now been appreciated by Pomeranian Regional Planning Office I Marshall of Pomerania.

Implementation of woonerf in Gdynia based on design a2p2 engineering and layout And NANU Pracownia Architektoniczna Achieve Excellence In the fifteenth edition of the competition “The best public space of the Pomeranian province”, Which was chosen on Friday (October 22) by Gdynia Vice President for Development at the Artillery Carriage House in Gdańsk, Marek Josek.

– From the very beginning, the idea of ​​redeveloping one of the streets of Gdynia according to the patterns coming from Holland was a great challenge for us. We fundamentally changed the previous functionality of this episode, inviting pedestrians and cyclists to it and giving them more space. The project itself has harmoniously become part of the stream of other changes that we are implementing in the city under the banner of “Gdynia Climate Centre”. We are all very happy to receive the award, given more than two years after the first Gdynia wonerf started, because it proves that it passed the exam, does its job and is very popular among residents and tourists. We have succeeded in transforming the urban space at a high level thanks to the large investment expenditures. In this regard, we are among the national leaders, which was also confirmed by the recently published investment rating of “Society” – in short Marek JosekVice President Gdynia for Development.

The Woonerf Who Changed Abraham

Let us remind you that the first in Pomerania and one of the first in the country Wenref on Abraham Street It is an idea that appeared in one of the editions of Gdynia civil budget. The idea to change the face of a part of this street in Śródmieście was expressed by the residents themselves – at first in a simplified version, while the city decided to approach the project more comprehensively, increasing financial expenditures and completely rebuilding the selected part.

This is how the first Gdynia Wonerf was presented at the time of its opening, Photo: Kamil Złoch / archiwalny

Finally, in June 2019, a completely new section of Abrahama Street (from 10 Lottego Street to the elevation of Batory Street) was put into use, which has become an open, pedestrian- and cyclist-friendly common area, with the car slowing down and lowering. traffic movement. Pedestrians or cyclists always have priority, and cars can only move at a speed of 20 km / h. 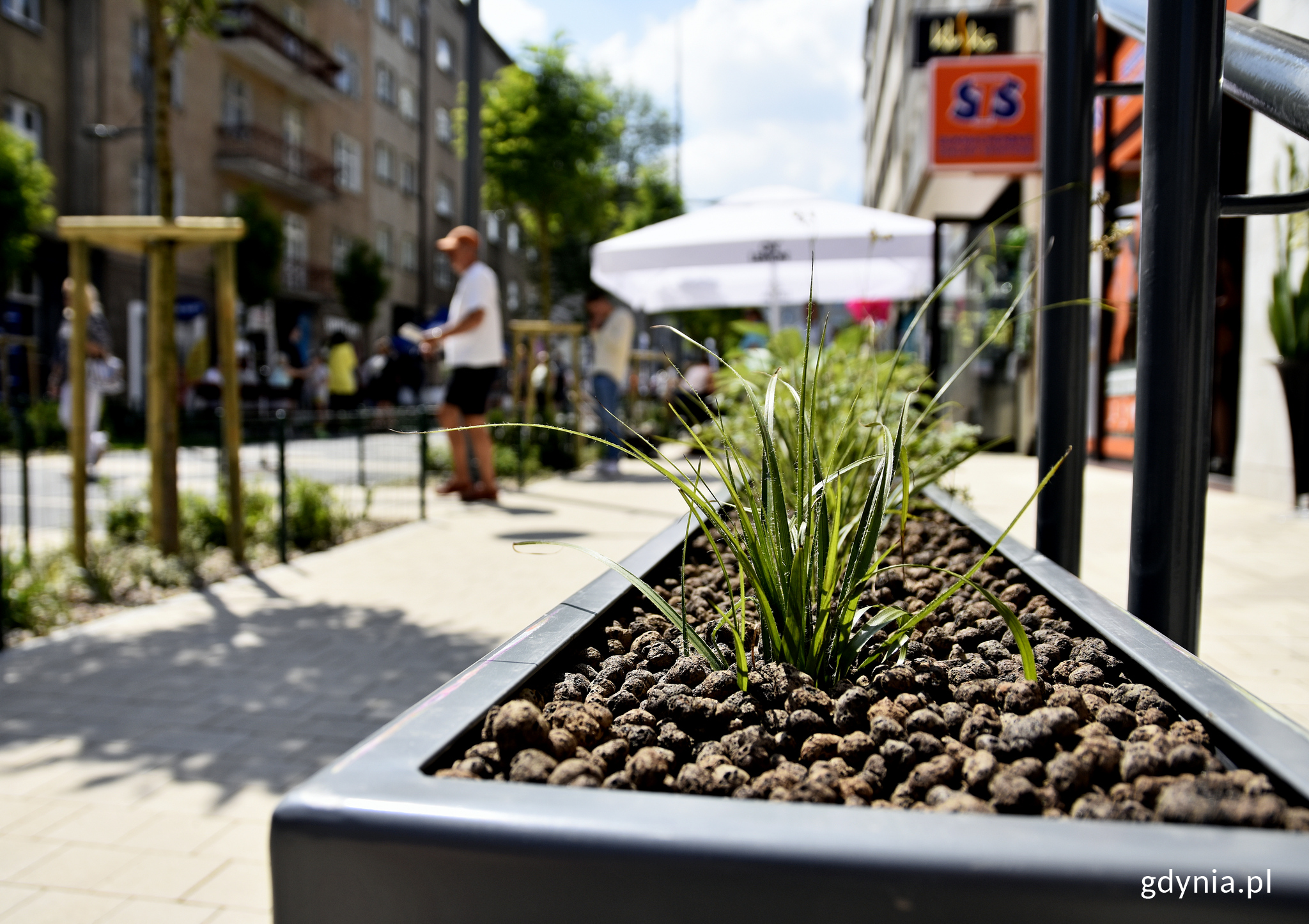 After part of Abrahama Street was reconstructed and turned into a plaza, new green spaces were added, Photo: Kamel Zoch/Archive

The value of the entire project amounted to about 3.8 million PLN. In addition to rebuilding the infrastructure, new farms and green spaces were also equipped. It made it possible to attract new pedestrians, stimulate the spots that local entrepreneurs run in that place, and change the way we think about how a downtown street looks and functions.

Sam Residential area (Free translation from Dutch: From street to apartment) is a pattern taken from the Netherlands, where for many years now, public spaces have focused on combining the functions of a safe pedestrian walkway, bike path, car park and meeting places, while limiting transit traffic for example. In Poland, this type of space was referred to as “city ​​squares“.

The essence of the solution is to design the street in such a way – while preserving its main functions – to create an aesthetic and safe space for all road users, in which they will be happy to spend time.

See also  Virtual offices are also known as co-working spaces
Don't Miss it slag. Changes to the Speedway of Nations regulations? We have a comment from the head of global motor racing!
Up Next Travel changes to the UK. In most cases, you will need a passport