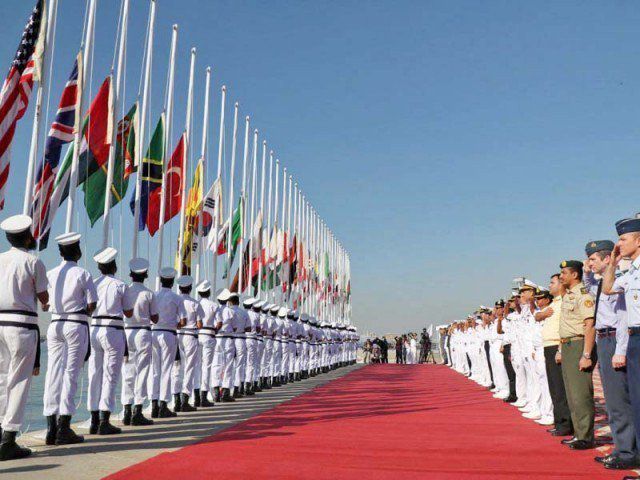 The Marine Safety Exercise 2021 that took place in Pakistan was a unique opportunity to see ships from NATO countries operating alongside Russian sailors, or Americans working side by side with the Chinese. In all, representatives of more than 40 countries around the world were to take part in the Pakistani maneuvers to varying degrees, most of which of course were symbolically represented by delegations of military observers.

At the same time, the maritime phase itself included the activities of the fleets of six countries. The main purpose of the exercises was to formally develop joint capabilities to collaborate in the event of anti-piracy activities taking place on the busiest shipping routes. As well as combating other conventional and non-traditional threats in the maritime domain, including anti-terrorism and anti-marine activities. The cooperation of the ships has also been tested when refueling operations on the water are required.

AMAN 2021 officially opened on February 12 this year and ran until February 16. It was another version of the Pakistani naval exercise, which, according to its organizers, was not supposed to be an element of building the capabilities of individual military blocs, but rather an investment in mutual understanding and exchange of information between the widest possible group of nations. . AMAN (Peace) has been conducted periodically since 2007. Parallel to AMAN 2021, Pakistan hosted the International Maritime Conference (IMC-21), organized by the National Institute of Maritime Economy (NIMA).

#PakNavy The multinational Ex AMAN-21 peaked in the North Arabian Sea with an international fleet review followed by the startling formation of the AMAN formation that includes the PN and foreign warships. The President of the Islamic Republic of Pakistan, Dr. Arif Alawi, honored the occasion as the main guest. (1/4) pic.twitter.com/UsepQETUUz

He confirms that this is the first international exercise since 2011, when NATO warships met Russian warships. The Russians indicated that the frigate Admiral Grigorovich and the patrol ship Domitrij Rogachev had been sent to Karachi for the offshore portion of Aman 2021. The Russians had also deployed the SB-739 rescue tug and the Ka-27PS naval helicopter in the exercise area. Surface ships arrived in Karachi, representing the Russian Black Sea Fleet there.

Pakistan is striving to expand the idea of ​​safety exercises as much as possible, as it is an activity in the field of sending a signal about the need to internationalize the safety of major shipping routes. Thus, in addition to courtesy, it should be treated as a very practical tool to curb India’s aspirations to be a major powerhouse with regard to regional security, specifically in the maritime regions. Hence, for example, the visit of the President of the State, Dr. Aref Alawi, during 2021.

Don't Miss it Learn drawing from scratch – how to get started? Tips and rules for beginners
Up Next The fans decided. Diablo Chairs 2020 Gaming Plebiscite Award Winner