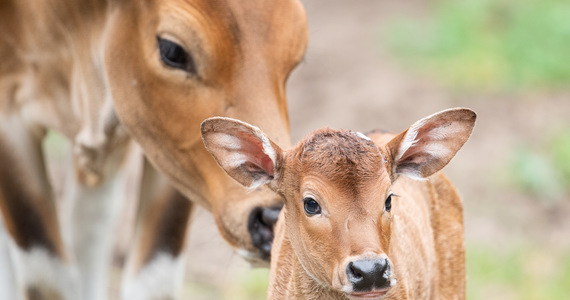 Wroclaw Zoo success! Two young Asian bantanga were born in the garden. The only conservative breed of this species in Poland is located in the capital of Lower Silesia. There are about a thousand samples of Javanese banteng in nature.

Snow leopards, harbor seals, and now Bantings – these are babies born in pairs in recent weeks. In the case of seals and banteng, the siblings are the half-brother. They have the same father but different mothers. This is what happens to the herd. The mothers are Saga and Mocha, and the proud father of the Bull – Django.

The Banteng is a species of Asian cattle whose population has declined over the past ten years as a result of unsustainable agricultural crops, deforestation, and the cutting of natural habitats by roads.

But this species also suffers from … soup. Banteng is a victim of pseudo-medicine. Asians believe that a dish prepared with the addition of ground pods increases vitality, and this is obvious nonsense. Keratin, the basic building block of Banting horns, is no different from human nails. Unfortunately, superstition and the killing of these rare cows for meat did their job – says Radosław Ratajszczak, President of ZOO Wrocław.

Not only the Javanese banteng suffers, but all of their subspecies. In 2020, its global population has fallen dramatically by more than 70 percent. It is estimated that 4,000 to 8,000 individuals remain in nature.

In Wroclaw, the first banteng appeared in 1992, and the small one – 4 years later. To this day, 11 puppies have been born in the world, and they have been placed in conservative breeding all over the world.

Caregivers confirm Bantenges are very cute but shy animals. It is a very sensitive and disease-prone species, so it can be difficult to breed it. Bantengas are smart and learn quickly. They interact with their names and the orders of their parents.

Newborn baby boy and girl. The imagination of their breeders made these unique animals receive names associated with coffee or tea. Thus, after Saga’s mother, one of the sweets is named Prima, and in the case of the other, the caretakers consider the name Assam. The little ones will stay in the Wroclaw park for about a year.

The zoo and the ZOO Wrocław DODO Foundation have been supporting the breeding of banteng in nature since this year. They collaborated with Alas Borough National Park. The park is located in Java and is famous for protecting the Bantenj as part of a global conservation program called “Action Indonesia GMSP”.

They live in flocks of 10 to 30 individuals.

Males, with almost black hair, have a body weight of 1,000 kg and a height of 180 cm at the withers, they also have powerful curved horns.

Females are smaller, with chestnut hair and less impressive horns. They became the subject of hunting because of the bantenga horns.

See also  Russia picked up hypersonic fighters. These are the next steps in the Arctic
Don't Miss it Tokyo 2020: Bradley Bell will not play for the United States
Up Next Will the solar storm hit the Earth this week? Scientists deny this