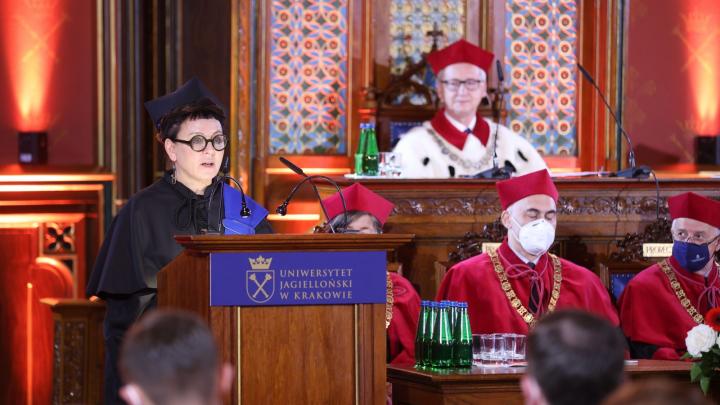 Olga Tokarczuk, a Nobel laureate in literature, was awarded an honorary doctorate on Thursday from the Jagiellonian University in Krakow. She is the eleventh woman to attain this dignity in more than 200 years of conferring it from the university.

The Senate of the Jagiellonian University awarded Olga Tokarczuk an honorary doctorate in particular for “literary creation as an art of expressing the entire human experience, revealing the truth about man, and allowing the individual to find order and meaning”; For non-literary activity: cultural, social, civic, environmental, promoting ideas of equality and democracy in the country and in the world. Her educational activity was also appreciated.

“This is a historic moment for me. In a way, Jagiellonian University is an exemplary university for me,” said Olga Tokarczuk, who received her degree from the Jagiellonian Collegium Novum.

During the speech, she indicated her middle name – Nawoja. “I got my second name from my parents to encourage me, fortunately, to bravely pursue my desires,” she said, recalling a short story about the half-legendary Nawojka, the first Polish student who had to pretend to be a boy in order to learn.

As Tokarczuk emphasized, today she stands in Krakow before a distinguished group not only as a woman, but above all as a writer, a person who – as she described him – “works on the frontiers of many areas of culture and science.”

“My job is to integrate our fragmented human experience, to give it meaning and meaning. To make it passable from one individual to another. It is not a scientific study of literature, but its creation itself, a process that remains much incomprehensible, even mysterious,” Tokarczuk described.

As she said, she understands literature very broadly as “participation in the eternal flow of story, and the profound human need to understand one’s existence.” “It is also a sophisticated method of communication that not only crosses the boundaries of cultures and languages, but transcends all boundaries of individual human beings” – she assessed and added: typography and image, seem to be a kind of quintessential essence – the fifth element, complementing and enlivening the other four elements, and being the ancient force of human life.

“Olga Tokarczuk is one of the most famous, respected and famous Polish writers and writers in Poland and the world. According to the prevailing opinion, in the person of the author + Books of Jacob + we are primarily dealing with an expert in the art of literary storytelling. Ryszard Nick.

Describing the work of the Nobel laureate, he referred, among other things, to the “psychologically complex heroes” of her stories; Heroes who reveal the truth about man. The professor also spoke about the author’s extensive knowledge “of the world, its past, positive and negative tendencies of development – knowledge with which the author was able to give readers the character of a convincing and at the same time fascinating fairy tale.”

According to the description given in praise, the heroes of Tokarczuk live in a world “immersed and entangled in relationships and processes (which they often do not cause, but determine their activity), they are inclined towards an unknown fate, guided by instinct and imagination, painful threats from the past and hope for the future. ., fascination or desire and moral rules or taboos, emotional dilemmas – not much at all – rational planning.”

Part of the praise referred to the concept of a “gentle narrator” created by Tokarczuk. According to the professor, the “tenderness” in this term is, inter alia, it is a balance with hate speech and hate, and has nothing to do with “passion”.

The praise drew attention to Tokarczuk’s non-literary activity. “The indisputable feature of Olga Tokarczuk is the rare capacity for civic courage, which is expressed in her continued commitment to the defense and liberation of abused and marginalized groups and minorities (whether women, LGBTI people, refugees or animals), that is, the pursuit of The idea. Equality, freedom and democracy – in the global and local, public and private dimension – as well as sensitivity and a sense of responsibility in the face of threats to the non-human natural environment, which, after all, is the place of human existence, its condition and protection is a fundamental human act and a great corrective task. ” He also asserted that this civil courage brought Tokarczuk a wave of hatred, but above all, it brought universal respect and recognition. Recognition and respect for the Nobel Prize winner – as the praise indicated – is enhanced by many initiatives, such as festivals, foundation activities and the opening of a former center.

“Her civic courage, independence of critical judgment, inventiveness and effectiveness in implementing new cultural and social initiatives that include her step-by-step understanding of civic obligations – these are even typical qualities of a contemporary culture builder, not withdrawing from life into the mythical + ivory tower +, but working personally and effectively for the ideal.” and the values ​​it proclaims,” said Nick.

Ludator also spoke about the global reach of Tokarczuk’s prose and its many awards. As he pointed out, Jagiellonian University was one of the first places in a long line of reputable universities willing to award the writer an honorary doctorate.

Tokarczuk was awarded the 2018 Nobel Prize “for her narrative imagination, which shows crossing borders with encyclopedic passion as a form of life.” Her books have been translated into more than 30 languages. Laureate, among others – the International Booker Prize for the novel “Beguni”, Jan Michalski for “Księgi Jakubowe”, two-time winner of the Nike Literary Prize for “Biegunów” and “Księgi Jakubowe” (PAP)