The National Bank of Poland reported a current account surplus in April 2021 of €1,740 million against a consensus of €1,260.5 million in surplus. Exports increased by 69.2 percent in April. On an annual basis versus consensus growth of 62.8 percent. On an annual basis, imports increased by 59.8 percent. On an annual basis versus the expected growth of 58.7 percent. The Polish National Bank reported that April saw an increase in the value of exports, especially car batteries, televisions, catalytic converters, clothing and furniture. On the other hand, the largest impact on imports was the increase in the import value of cast iron, rolled steel products, clothing, parts for televisions, computers, and processors.

As reported by NBP, the export of goods amounted to PLN 106.8 billion and was PLN 44.0 billion (70.0%) higher than in the corresponding month of 2020. This is a result of the lower reference level from April 2020, when the value of trade declined significantly due to restrictions in force in That time aimed at stopping the spread of the COVID-19 epidemic. 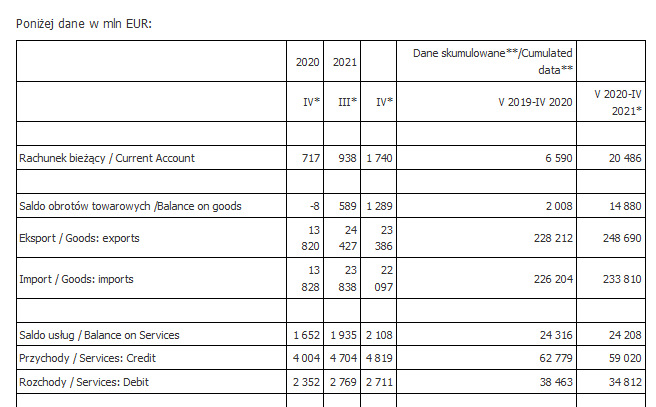 They expected an increase in the current account balance to 2560 million euros from 938 million euros in March, which was the result of a rise in the trade balance of goods.

Strong growth in exports and imports will be consistent with the year-over-year acceleration in industrial production and retail sales in April, supported by this year’s low base effects associated with the COVID-19 outbreak. In our opinion, the data on the balance of payments will be neutral with respect to the zloty exchange rate and Polish bond yields.

The beginning of 2021 led to a decrease in the value of Polish food exports. According to GUS data, its value in the January-March period decreased by 0.6% year-on-year. One factor that limited Polish food exports in the first quarter was lower sales to the UK due to Brexit (including the impact of UK food stocks at the end of last year amid pre-Brexit uncertainty). and increased transaction costs). ).

It should also be noted that Polish exports declined in the first quarter of this year. The negative calendar effect related to the leap year also had an effect (in 2020, February had 29 days, while in 2021 it had 28). A detailed analysis of the data after months shows that March of this year. There has already been a slight increase in Polish exports of agri-food products year on year (+2.8% year on year).

In the coming months, we expect another increase in the value of Polish food exports, backed by the gradual recovery in the HoReCa sector that we are anticipating, in addition to the strong increase currently observed in agricultural commodity prices.

As a result, we estimate that the value of Polish agri-food exports in 2021 will increase by about 8% and will exceed 37 billion euros, setting another record. The main risk factors for our forecast are the further course of the epidemic, as well as agrometeorological conditions in Poland.

According to economists’ forecasts, the current account balance data for April is among those that were most affected by the impact of the low base. Experts forecast that exports in April increased by more than 60%. Import growth also approached this level, albeit slightly lower. These high dynamics are the impact of the coronavirus pandemic – in response to the first wave of infections that appeared a year ago, individual governments have imposed restrictions limiting economic activity, which, among other things, led to the collapse of international trade.

Regardless of the component dynamics defining the scale, Poland regularly records surpluses. All indications are that April saw a continuation of this trend. Expectations are for a surplus of about 1.3 billion euros, after a surplus of 940 million euros in March. The last time Poland posted a current account deficit was in August 2019.

PKO BP economists point out that after the April data is released, the balance for the past 12 months will once again hit the highest value in history.

Santander BP economists note in their weekly bulletin that the current account data in their opinion may be better than expected and may have an impact on the zloty.

The economists wrote: “Data on foreign trade will look very positive – high current account surplus (our forecast is clearly above consensus), export dynamics above 60% y/y (base effect!) – which may temporarily support the zloty.” They noted that the appreciation of the zloty was catching up with other currencies in the region, which rose in value last week.