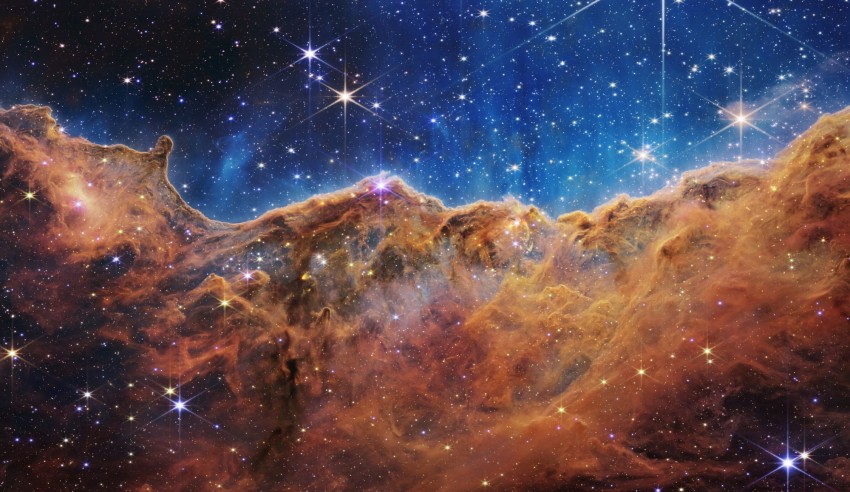 On Monday evening, NASA released the first full-color image from the James Webb Space Telescope. We’ve seen the galaxy cluster SMACS 0723 4.6 billion light-years away, as its gravity bends light from objects outside the cluster, inflating it, so we can see deeper into space. NASA has now provided more images.

So we can see Carina Nebula, one of the largest and brightest nebulae. It is located about 7,600 light-years from Earth in the constellation Carina. The Carina Nebula is home to many massive stars that are more than the size of the Sun. The “mountains” and “valleys” in the image represent the edge of the star-forming region NGC 3324. The highest “peaks” here are about 7 light-years long. Webb showed the birthplaces of stars and the same stars that were not visible in visible light.

Show us a web too Southern Ring Nebula, also known as Torn Eight. It is a planetary nebula, an expanding cloud of gas surrounding a dying star. The Ripped Eight are located about 2,000 light-years from Earth and about half a light-year in diameter.

The Webb Telescope is the first instrument to show us a faint star inside the Southern Ring Nebula. It is this star, which has been emitting dust and gas for thousands of years, that formed the nebula. Webb will enable astronomers to carefully study planetary nebulae. The scene is dominated by two stars orbiting each other in a narrow orbit. These stars affect the distribution of gas and dust from either, creating irregular patterns.

In the following picture we can see Stephan quintet, the first compact galaxy cluster known to mankind. It was discovered in 1877. Four of the five galaxies that make up it are gravitationally bound. Stephan’s Quintet is 290 million light-years away.

Stephan Quintet is Webb’s biggest board to date. It consists of more than 150 million pixels and consists of nearly 1,000 images. Webb even photographed shock waves shaking the pentagram as one of the galaxies, NGC 7318B, passed through it.

The telescope also provided a spectroscopic image of the planet WASP-96b. It is a hot gas giant located 1150 light years from Earth. It orbits its star in 3.4 days and is half the mass of Jupiter. The data confirms the presence of water in WASP 96b’s atmosphere, and scientists have noticed evidence of haze and clouds that we didn’t see in previous observations. A more detailed analysis of the data will allow to determine the amount of water vapor, carbon and oxygen and to assess changes in the temperature of the atmosphere depending on its height above the planet.

Don't Miss it Great start for Andy Murray for Newport. The return match, Wimbledon champion
Up Next Cyberpunk: Edgerunners with official trailer. When will Netflix debut?