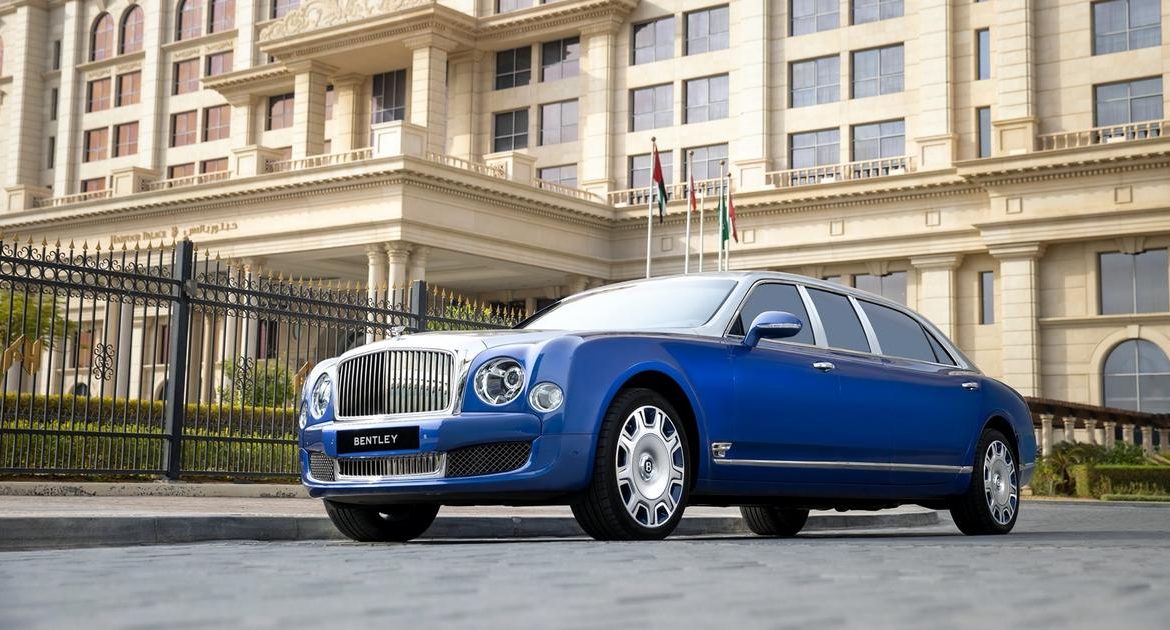 For the wealthy of this world, this is a unique opportunity, because the Bentley Mulsanne is no longer produced. The second thing is availability in all latitudes – five limousines previously reserved for customers from the United Arab Emirates return to the global complex. Now it can be ordered from anywhere in the world.

All limousines are handcrafted at our Bentley Crewe facility. Each of them has a unique personality thanks to the diverse finishes. The images show a silver/blue body with Silver Frost finishes and Moroccan Blue paint, but there are also variants: Black, Black/Purple, Silver/Sapphire and Red/Beige. 21″ alloy wheels are also matched with body colours. Inside, the cars differ in veneer, colors of leather upholstery and carpet.

Each Mulsanne Grand Limousine is 1 meter long and 79 millimeters more headroom, allowing four people to travel in true royal conditions in the aft. This part of the cabin is similar to the interior of private aircraft. The sofas face each other, allowing occupants to have an uninterrupted face-to-face conversation.

The only thing you can worry about is whether the cooled drink in the refrigerator has already reached the optimum temperature. There were even glass cups and crystal mugs on board. For convenient consumption, it is enough to open the veneered tables. You can also work on it, because the car has iPad charging stations, as well as three dials that indicate the temperature, local time and the current UK time.

From the available (at that time) Mulsanne cars to the “ordinary” humans, the Arabs differ not only in body length and height. Engineers from Mulliner also equipped the cars with some unusual technical solutions, such as, for example, a special heating, ventilation and air conditioning system for the cabin, an intercom for communication with the driver, a partition made of “smart” electric glass separating passengers from the cabin, which, after Pressing a button in milliseconds, it becomes opaque.

Under the hood, unchanged – the legendary 6.75-liter V8 runs here, which is also a rarity, because last year Bentley sent him (unworthy) for retirement. Technical information? 512 hp and as much as 1020 Nm! The British boast that on these cars even the “Flying B” figure adorning the hood differs, because on its base is the inscription “Coachbuilt by Mulliner” (“Custom Made by Mulliner”).

Last but not least, it’s curious: Bentley recently celebrated the number one order since the creation of the Mulliner division (2014). As you can see, there is no shortage of interest in custom-built cars. One would like to ask about the cost of this rare project. The answer to this question ranges from “too high” to “terribly expensive,” but only potential customers will find out. Fortunately, Bentley pays for shipping!

Don't Miss it Tokyo 2020. Roddick was fast, but the team only finished eighth in the sprint qualifiers
Up Next 27 million PLN in detail studio. It was enough to enter two cars (video)