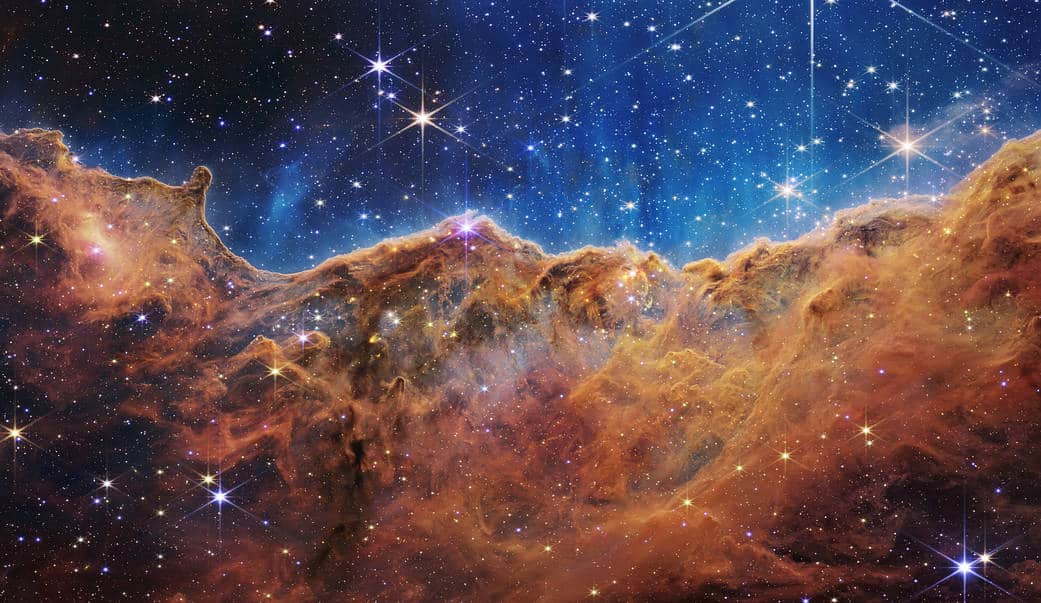 We’ve waited six months for this – since the launch of the James Webb Telescope on December 25, 2021 until now. The images captured by this unique telescope have finally been shown.

Many years of mission planning and the development of new technologies have brought scientists to a historic moment. We will see for the first time how the James Webb Telescope operates in space. Only today, on July 12, 2022, full color photographs were submitted.

What distinguishes the Webb telescope is its infrared detection technology, it will reveal the hidden universe to our eyes. Stars surrounded by dust clouds, water in the atmospheres of other worlds, and the first light from the oldest galaxies ever.

During several years of designing this unique device, the creators wondered what the telescope’s “eyes” should focus on in the first place. The mission of an international team of scientists from NASA, the European Space Agency (ESA), the Canadian Space Agency and the Space Telescope Science Institute (STScI) was to demonstrate Webb’s unprecedented potential and begin scientific work on further space exploration. Not without importance was also the desire to bring about the so-called “Wow” effect in both the astrological community and society.

What did the Webb telescope show us?

During the press conference, an exhibition of photos taken by Webb was presented. What did we see?

The first orbiting image of the world, that is, the deepest and most accurate infrared image of the distant universe ever seen. The image, dubbed Webb’s First Deep Field, is a detailed image of SMACS 0723.

NASA’s James Webb Space Telescope has captured a clear fingerprint of water, along with evidence of clouds and fog, in the atmosphere surrounding a hot and bloated gas giant orbiting a distant sun-like star.

The observation, which reveals the presence of specific gaseous molecules based on slight dips in the brightness of the exact colors of the light, is by far the most detailed of its kind. It demonstrates Webb’s unprecedented ability to analyze the atmosphere hundreds of light years away.

While the Hubble Space Telescope has analyzed many atmospheres of exoplanets over the past two decades, making the first apparent detection of water in 2013, Webb’s immediate and more detailed observation represents a major step forward in characterizing potentially habitable extraterrestrial planets. Earth.

The faint star in the center of this scene has been sending rings of gas and dust in all directions for thousands of years, and the James Webb Space Telescope has revealed for the first time that the star is covered in dust.

Two cameras aboard Webb captured the latest image of this planetary nebula, designated NGC 3132 and informally known as the Southern Ring Nebula. It is about 2500 light years away.

Webb will allow astronomers to delve into many other details about planetary nebulae, like this one – clouds of gas and dust emanating from dying stars. Understanding what molecules are and where they lie in the coating of gas and dust will help scientists improve their understanding of these things.

Stephan’s Quintet portrait is Webb’s largest painting to date, covering about one-fifth of the diameter of the moon. It contains more than 150 million pixels and consists of nearly 1,000 separate image files. Information from Webb provides new insight into how galactic interactions fueled the evolution of galaxies in the early universe.

With strong infrared vision and extremely high spatial resolution, Webb displays detail never before seen in this group of galaxies. The image is decorated with bright clusters of millions of young stars and starburst regions of star birth. Sweeping tails of gas, dust and stars are pulled from several galaxies by gravity. In the most dramatic way, Webb caught the massive shock waves as one of the galaxies, NGC 7318B, crashed through the cluster.

This image looks like a landscape of “mountains” and “valleys” dotted with twinkling stars. But it is actually the edge of a nearby and young star-forming region called NGC 3324 in the Ke Nebula. An image captured in infrared light by the new James Webb Space Telescope shows for the first time previously unseen regions of star birth.

How does the James Webb telescope work?

Each Webb tool should be tested in several operating modes. These modes include standard shooting. In addition, spectroscopy and various cloaking techniques that allow the telescope to detect dim light sources as well as very bright ones. After each of Webb’s four science instruments and seventeen modes have been fully tested and given the go-ahead by science and engineering teams, the first images and other data will be captured and handed over to the imaging team for processing.

See also  Opolskie: 9.5 thousand computers purchased by the local government will be delivered to schools in the area
Don't Miss it This is Wimbledon’s biggest nightmare. The organizers provided statistics
Up Next Cyberpunk 2077 from Netflix on first material