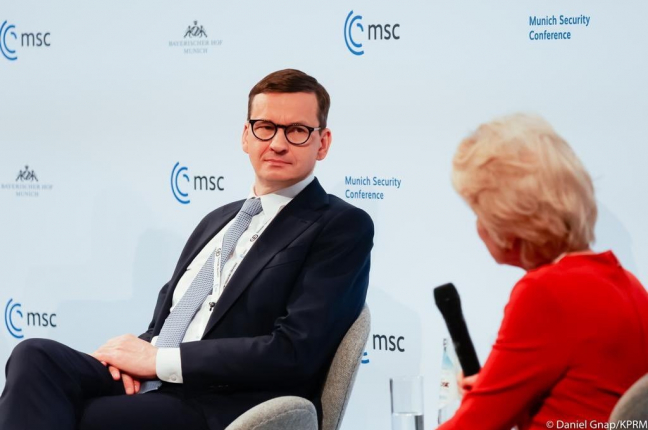 Morawiecki in a letter to EU leaders: Cut off Russia from SWIFT, close Russia’s airspace (in a nutshell)

Cutting Russia off from the Swift system, closing Russia’s European airspace, freezing and confiscating the property of Russian elites, cutting companies off the capital markets and abandoning the purchase of fuel from Russia – these are the sanctions imposed once again by Prime Minister Mateusz Moraviki. European Union leaders on Friday.

In a letter to EU leaders – European Council President Charles Michel and European Commission President Ursula von der Leyen – Prime Minister Mateusz Morawiecki presented a list of sanctions that – he wrote – should be presented immediately and “will stop the barbaric attack on Ukraine”. The content of the message was published on the Prime Minister’s Facebook profile.

The list of sanctions includes: cutting Russia off from the Swift system, closing European airspace to Russian aircraft, freezing and confiscating assets of Russian elites and oligarchs linked to Putin, removing Russian companies from the MSCI index and isolating them from capital markets, finally ending Nord Stream 2, and abandoning the purchase of hydrocarbons from Russia and join the sanctions imposed by the people of Vladimir Putin and the head of the Russian Foreign Ministry, Sergey Lavrov.

“This is Ukraine’s only hope, and sanctions are needed here and now,” the prime minister wrote in his message.

See also  "The Light of Freedom" - the fortieth anniversary of the enactment of martial law - Ministry of Education and Science
Don't Miss it From McDonald’s to the world champion. The remarkable transformation of Lawrence O’Colli
Up Next Inowrocław – Anna Szostak of Inowrocław in the 5th edition of “Ninja Warrior Polska”. We have pictures!