I’ll start our Monster Jam Steel Titans 2 review with a little anecdoteWhich will bring you closer to my experience with monster trucks. I live in a medium-sized town (about 60,000 inhabitants) in Pomerania, so when it happened once, nearly a decade ago, an event associated with these huge cars, you can imagine the amount of noise in my surroundings.

I was very interested in the whole project myself. However, my friend and I came up with a plan – given the fact that the view from his balcony also extended to the parking lot below one of the supermarkets, we decided that it would be a good option to see the monster trucks, while at the same time not paying exorbitant cash and avoiding persuading parents to take an evening vacation. . It seemed like a perfect idea!

But what was a surprise to us, when we were excited about the whole event, we noticed that … a tent had been set up there shortly before the event. Well, we’re left to content with the noise of the engines. This is where my adventure with monster trucks ended To this day, nothing has changed in this regard. So, as you can guess, the review will be written by an amateur of this type of production. Maybe better …

Monster Jam Steel Titans 2 – To be more, better and more

Monster Jam Steel Titans 2 It is the next installment of well-received monster truck racing, where we have a large selection of different competition forms at our disposal and a large number of cars to compete in. Rainbow Studios is responsible for creating the revised title, that is, the creators of the first part of the series, for example, MX vs. ATV vehicle. So the experience cannot be denied When creating games of this type.

This time the focus was on providing better experiences and more elements. We only get 38 machines (Including those referring to other works of popular culture), so there is a lot to choose from. Each is performed a little differently (although it’s not a very noticeable thing), and at the same time, we can develop them all somewhat, so that driving them is more convenient, and the acrobatics themselves are a lot easier to perform.

A massive modernity presents up to five open worlds that we can freely traverse. It’s not overly fanciful by any means, but for fans of free riding and off-road training, they might turn out to be something really fun. Furthermore, The many collectibles dotted around each map encourage you to wander around And check out even the most unusual alleys.

Competition is the key

As I mentioned, we have a lot of trucks at our disposal, allowing us to get the best results. Of course, the key element here is not the crossing of open areas, but the functional mode! This was created in a true competition style, and we can compete in many different competitions to finally get to 1st place Earn the title of Monster Jam Steel Titans 2. 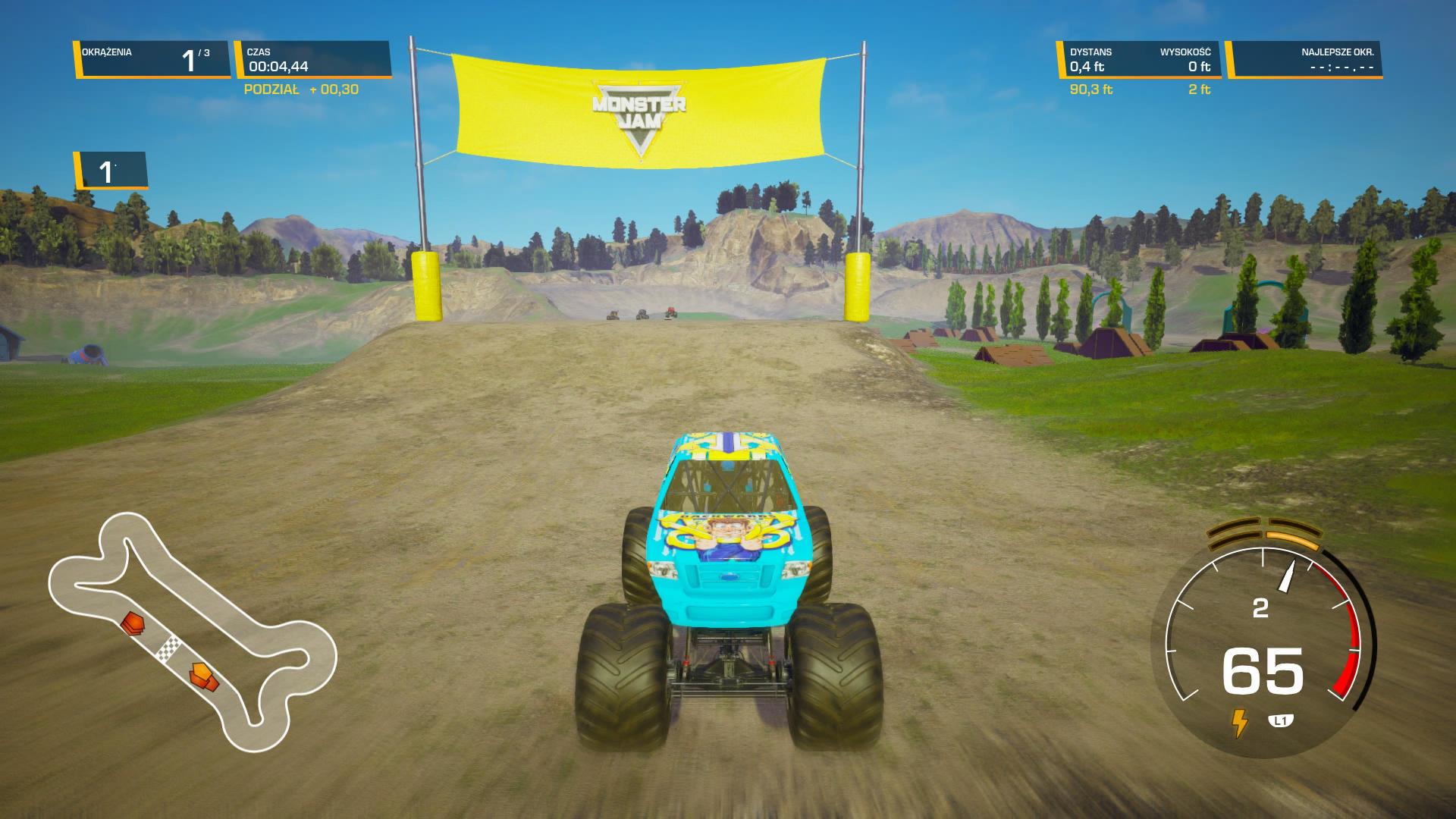 Among the challenges of the aforementioned mode, we have steering (from marker to marker) and on tracks (on specific terrain), recorded demolition (where it comes to the most effective destruction) and, of course, free acrobatics, where we have to use the best tricks with large machines to obtain The correct number of points. And the All of this has three levels of difficulty that can be defined. No surprises, we’ve got: Easy, Medium, and Hard. As a complete beginner, I have never had any problems with the easy stuff, the medium ones had demanding levels, and I didn’t even take the hard ones.

Here comes the problem … It’s very difficult to run them all at onceBecause he gets bored quickly. After a few tournaments, he’s totally tired of it, because aside from a little remodeling of the squares or adding some new items to smash them, almost nothing changes. I felt like I was doing the same thing over and over again, for the same purpose and the same way.

Of course, you can’t forget about the possibility of multiplayer games – both on the shared screen and online. I have to admit that in the case of online competition, I crept out. Although this is actually the case with most titles of this type – Without proper experience and knowledge, it makes no sense to venture away. 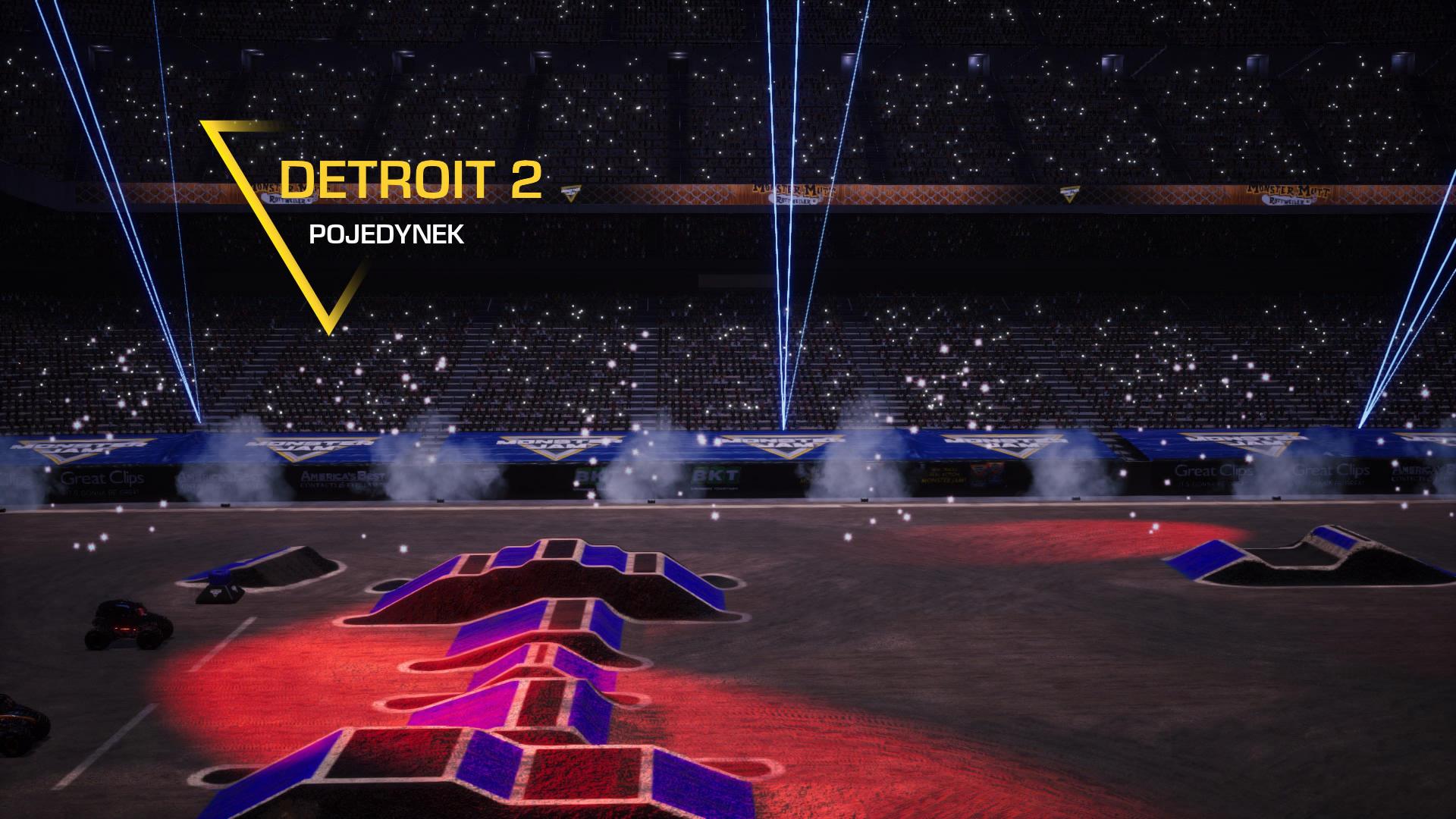 Thankfully, playing in co-op sofa mode was much easier when faced with someone with a similarly low experience level. However, there is one element I can stick to – The narrow screen in cooperative mode severely limits the comfort of controlling the vehicle. The smaller the viewing area, the harder to catch a crazy mega truck. And take your word seriously, keeping an eye on your surroundings is crucial.

With a student eye

rain This reviewed Monster Jam Steel Titans 2 game can be fun for someone completely unfamiliar with monster trucks? I have my doubts. From the perspective of someone who has no idea how to drive such a huge machine, I must say that I feel more like simulators than arcade games. Some tricks feel idle. Of course, jumping with such a car is one thing and another with a skateboard. There is still something wrong with me.

I get the impression that this game is mainly aimed at Monster Track fans, and the developers have done little to generate new fans of this extreme sport. From what I read before the premiere, the Rainbow Studios team has promised physics changes. I won’t lie – I miss the comparison with the first batch, but as a freshman I have mixed feelings. He did not encourage me at all to get advances. 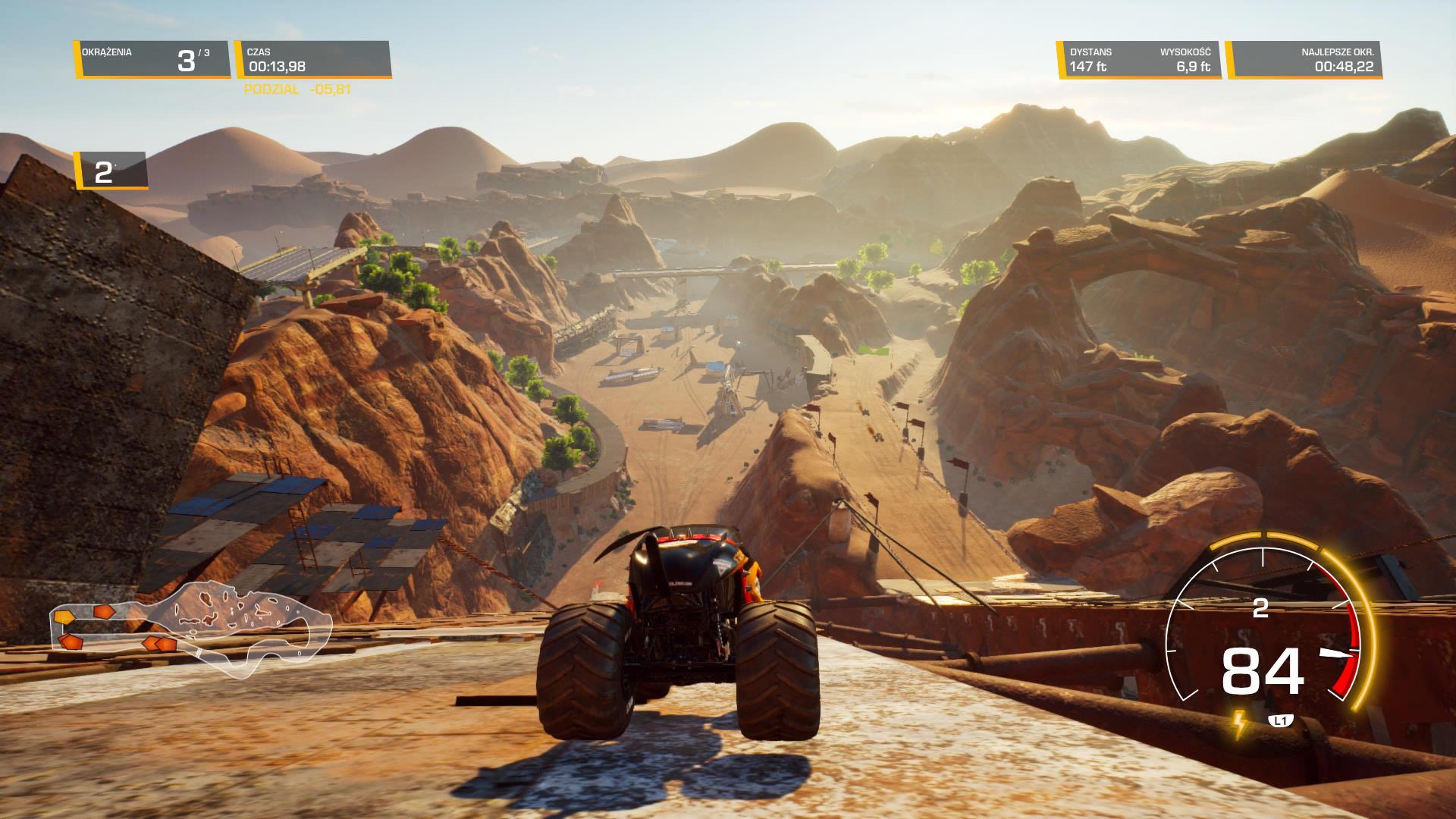 However, there is a lot of trouble caused by the fact that this is so Both analogues account for other wheels – The front axle is left to the wheels, and the right axle is used to operate the rear axle. I wasn’t quite used to it, and even after several hours of constant driving, it was very unnatural to me. Though, as I said, it may be a matter of experience.

In fact, the controls themselves look ingenious, but they practically jump from being too lax to useless. There is nothing in between and it also creates an uncomfortable effect that becomes annoying with long sessions. The easiest way is to drive slowly in our reviewed Monster Jam Steel Titans 2 gameBecause acceleration is often associated with falling off the track or rolling over. Perhaps after twelve hours or so of the game it could be mastered, but the developers did little to encourage us to stay in it for the long haul.

Overall, it would have been better

There is no shortage of content, and it will delight monster truck fans, especially those who love progenitors. More maps, vehicles and challenges All this means that there is no doubt about what needs to be done. However, if you have no experience with this and are just looking for something that will allow you to de-stress, I suggest you think twice. It might turn out to be more irritation than pleasure in all of this. 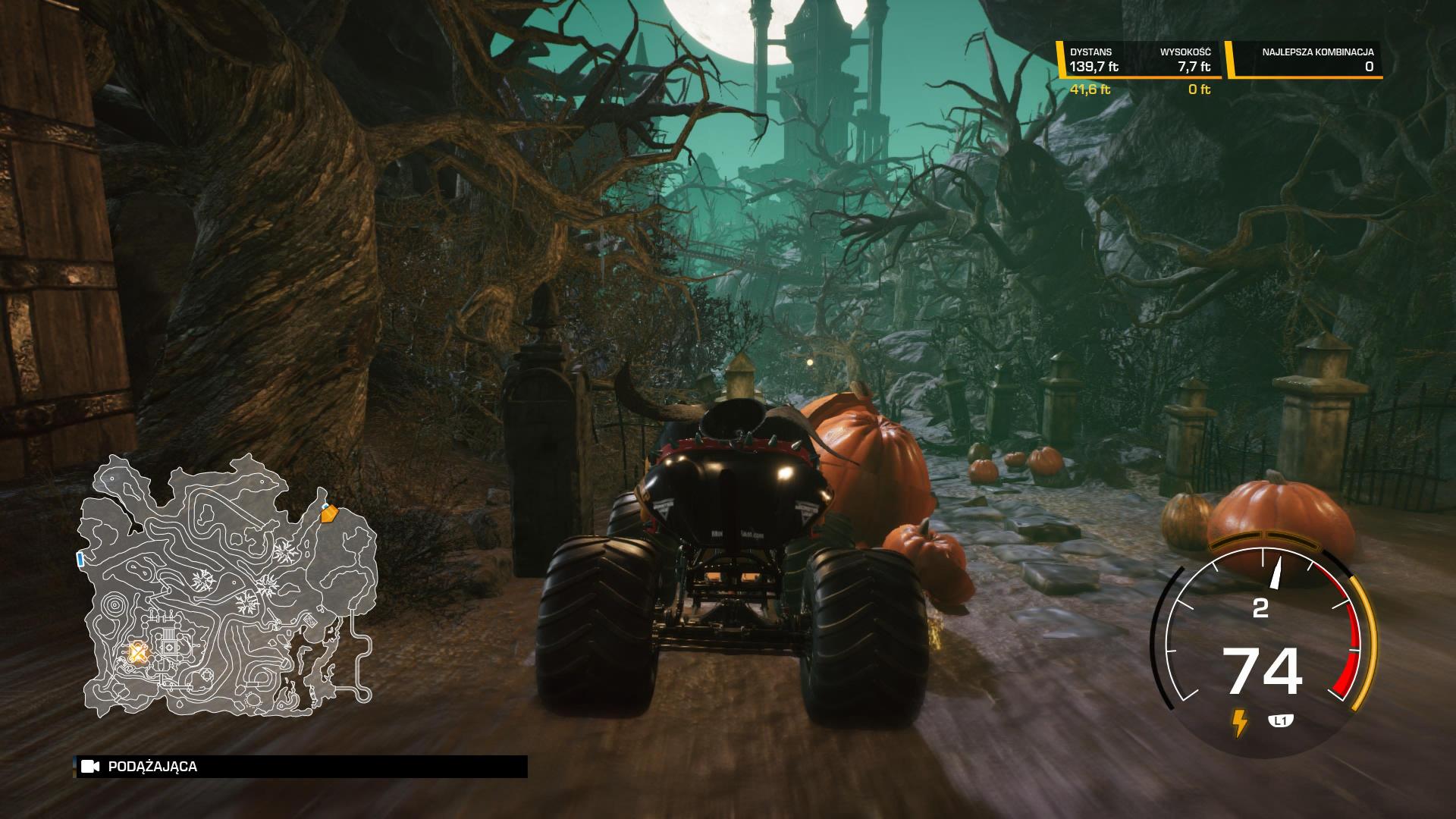 However, this is definitely not a complete junk. Of course, you can feel some graphic flaws and bugs that are often noticeable, but everything is really smooth (at least on PlayStation 5). Moreover, being able to unlock new machines is just so addicting. It is not enough to drive around the map and find collectibles and trainingTo compete with the best in the world through the internet, but somehow enthusiasm for the story mode will suffice.

Monster Jam Steel Titans 2 could have been better without a doubt. Although they show a lot of love for monster trucks, experience with genre games, and a desire to bring the best product into the hands of fans, something else is missing. A type of openness to a wider audience. However, if you like the down payment, and want to watch the mega vehicles jump over trucks on YouTube, you should be happy to have fun with the revised project.

Don't Miss it Puerto Rico attack on the U.S. Congress in 1954
Up Next Wirtualna Polska – everything matters