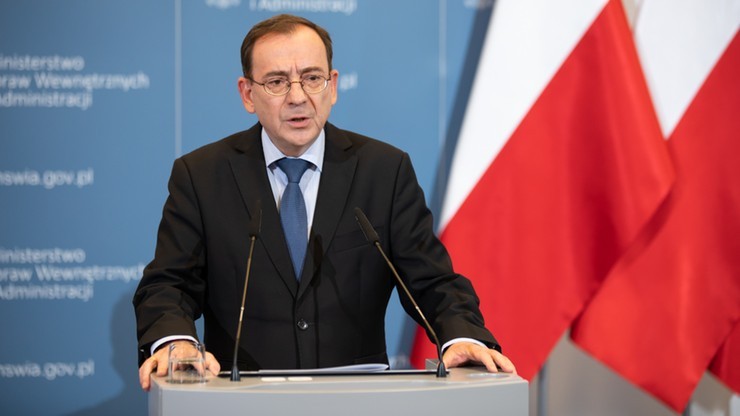 US President Joe Biden said on Friday that the situation on the Polish-Belarus border is a major concern. He pointed out that Washington has communicated its concerns to Russia and Belarus.

– These are important words. This indicates that the United States is closely watching what is happening in our region, and moreover – it is ready to act – said the head of the Ministry of the Interior and Administration on RMF FM radio.

– We have the declaration of US sanctions on Belarus, and we have a very high US activity in relations with Russia. Kaminsky said that the head of the Central Intelligence Agency (CIA) visited Russia in recent days, where he met with Russian intelligence chiefs and conveyed a message to them.

And he announced that the US Special Services Coordinator, Avril Haines, will visit Poland next week.

Kaminsky: The United States announces that it will join the sanctions that the European Union will impose on the Lukashenka regime in the near future

These words will be followed by other verbs. It may escalate if the other side ascends for political reasons, and uses immigrants as well, to profit from its activities. The United States has announced that it will join the sanctions that the European Union will impose on the Lukashenka regime in the near future. The head of the Ministry of Interior and Administration confirmed that there is full cooperation and a full exchange of information, and there will be joint actions.

See also  Princess Kate does not wear orange clothes. why?

See: the latest information from the border. Alexander Lukashenka wants to send migrants to other crossings

We are dealing with an attack on the entire European Union and Western society, Kaminsky said, and that it is a “politically motivated attack, using an artificial influx of illegal immigrants flowing into Europe.”

If our borders are soft, and if everyone wants to cross these borders, we will deal with a huge political and social problem. We will not have several thousand immigrants in Belarus who want to enter the EU illegally, but hundreds of thousands of such immigrants – said the Minister of the Interior and Administration.

The effect of deliberate actions by the regime of Alexander Lukashenka

Since the spring, the number of attempts to illegally cross the Belarusian border with Lithuania, Latvia and Poland by immigrants from the Middle East, Africa and other regions has increased sharply.

The European Union and its member states assert that this is the result of the deliberate actions of the regime of Alexander Lukashenka, which is actively using migrants in response to sanctions.

From September 2, due to immigration pressure in the border region with Belarus at 183 locations in the district, a state of emergency applies in the Podlasie and Lublin regions.

Don't Miss it COP26 is still without agreement. Talks are still in progress, although the conference was about to end
Up Next Everything is clear now. This is the country that emits the most greenhouse gases