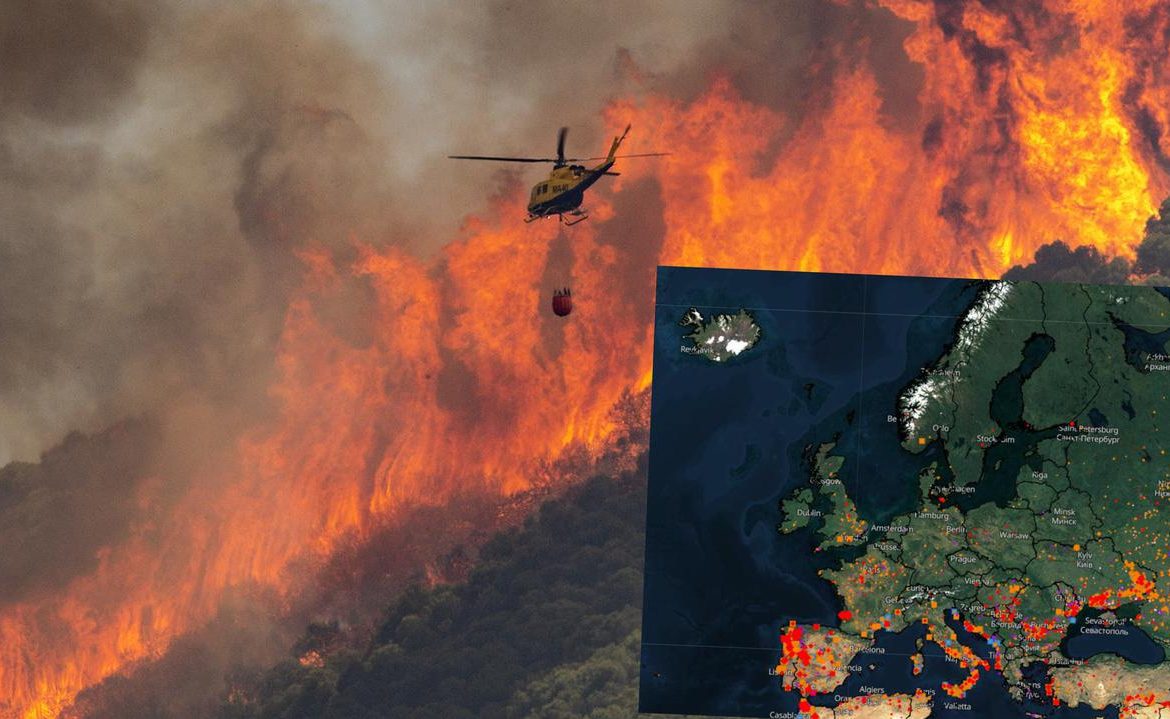 Southern and Western Europe were affected by a prolonged and intense heat wave, which increased the risk of fires. Several popular tourist destinations in Spain, Portugal, Croatia and France are on fire. Hundreds of people had to be evacuated when the items reached the perimeter of their buildings.

2022 is particularly dangerous in terms of fires. According to the data of the European Forest Fire Information System (EFFIS), by July 9, more than 343,000 hectares had been burned in the countries of the European Union. This is about the same as the whole year average. Information about the difficult struggle with the element flows in from many places in Europe.

Hundreds of people were evacuated from their homes as a result of the fires in France, Spain and Portugal on Friday.

The map is also available on the official website of the EFFIS project.

Fire in the Iberian Peninsula

Countries that are highly affected by heat Portugal and Spain have been battling massive fires for several days. The Portuguese government has declared a red alert due to the heat and the raging fires, the Associated Press reported. More than 1,000 firefighters battled 17 fires in this country on Friday.

In Spain, too, there were dozens of fires in nature that day. Fires in the part of Extremadura, which borders Portugal, and in the central region of Castile and Leon, forced the evacuation of four other villages Thursday night. Flames threaten a 16th century monastery and national park.

In Catalonia in the northeast, authorities have halted camping and sports activities around 275 villages to prevent fire hazards, and restricted agricultural work to machinery.

A new fire broke out in Spain on Friday afternoon. More than 400 people have been evacuated from the hills of Mijas, a popular tourist destination in Malaga province. Beach-goers in Torremolinos, about 20 km away, can see plumes of smoke rising above hotels along the coast.

In total, more than 1,300 people were evacuated in Malaga province on Friday.

France also struggles with fires. A fire has broken out in many places in the south of the country since last week. On Wednesday, firefighters battled the element in the Gironde area. The flames appeared in two places: near the city of Landeras and on the Atlantic coast, near the famous Dune de Bella Beach. In both places it was necessary to evacuate residents and tourists.

On Friday, it was reported that 11,300 people have been evacuated so far in Gironde County. About 7350 hectares of land burned. The authorities said the situation was still under control.

For several days too Croatia struggles with fires. On Kontakt 24, we receive recordings from the coastal town of Vodice, showing clouds of smoke from a nearby fire. As Mr. Zbigniew, the author of the recording, said, there were fires burning near the houses.

– For 12 years, I go here every year for holidays, in this city. There are frequent fires here, but I have never seen such fires before. It burned a few times, but not too much. Aircraft put out the fire. At four in the morning there was nothing to breathe, and we had to close the windows. We had a balcony covered in ash and burnt grass. He said the fire must have been very close by now.

Don't Miss it Acknowledgment of the US Supreme Court ruling on abortion. The House of Representatives passed two bills – Wprost
Up Next A mysterious signal from space that looks like a human heartbeat