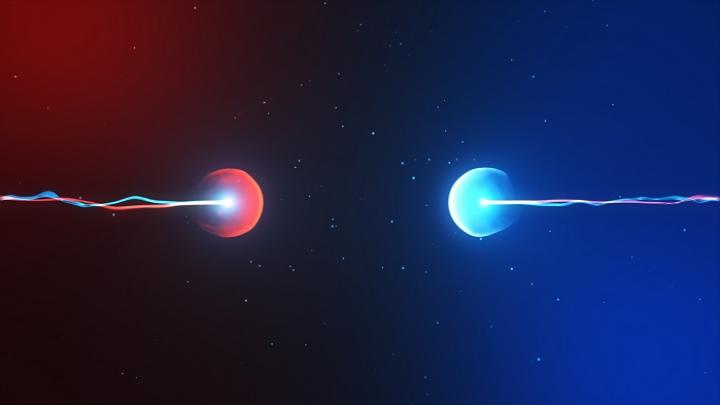 This is the scientific equivalent of “find 10 differences between images”: finding the difference between matter and antimatter. There is a lot at stake in this mission: it is the answer to the question of why we exist. Now, in the LHCb trial at CERN, researchers have found another (but not the last) difference.

Shortly after the Big Bang – it can be assumed – equal numbers of matter and antimatter particles should form. A particle has an opposite charge and is an inverse image of an antiparticle. And when the two meet – they are annihilated. It seems that all particles and antiparticles must immediately be converted into energy in the annihilation processes. But she didn’t, because there we are, the universe… and all the rest. We are made of material. Antimatter is much rarer.

Some subtle differences between matter and antimatter must have contributed to the survival of the matter that makes up our world. We have known some of them for years. Now an international team of physicists, working as part of the LHCb experiment at the European nuclear facility CERN, has made another block of this complex puzzle, which seems small but is of great importance. Representatives of the National Center for Nuclear Research in Świerk report the research in a statement sent to PAP.

An attractive object to search for so-called mesons that break CP symmetry.

Mesons are unstable particles – but they live long enough to study their properties. The first mesons (pions) were observed in the first half of the twentieth century in cosmic rays. Today we know that it is made up of a pair of quarks and an antiquark, and since there are 6 kinds of the same quarks (physicists talk about six smells, which have absolutely nothing to do with the senses of smell in everyday life!) the combinations that lead to the different mesons are really many. Of course, each meson has its own antiparticle, in which quarks and antiquarks turn into their own antiparticles.

CP symmetry breaking in the decay of neutral kaons, that is, mesons with quarks, up and out quarks, was observed more than half a century ago and was awarded the Nobel Prize. Twenty years ago, symmetry breaking was also observed between mesons containing a beautiful quark. The mystery was, among other things, mesons with charm quarks, which in terms of mass lie between the strange quark and the beautiful quark.

“Until now, we have not been able to directly and accurately measure with proper accuracy how the CP symmetry breaking appears in the decay of enchanted mesons. The results of the analyzes presented at the just completed ICHEP Conference on High Energy Physics in Bologna perfectly fill this gap”- says Prof. Wojciech Wiślicki of the National Center for Nuclear Research (NCBJ), in a statement from his institute. Results are available at LHCb . site.

The latest results are the result of detailed analyzes of about fifty million cases with the decay of D0 magic mesons into positive and negatively charged quanta. These deviations were recorded over several years during the collision of protons in the LHCb detector operating at the Large Hadron Collider at the CERN facility near Geneva. Part of the calculations related to data processing were performed in the Świerk IT Center.

“In fact, the break in the symmetry of space charge in the decay of enchanted mesons was first observed in the LHCb experiment three years ago” – explains Dr. Artur Oklia (NCBJ) in the release. “However, in contrast to the present analogy, the contemporary analogy has not clearly suggested a different matter-antimatter asymmetry between the decay of charm mesons into Kaon and anti-Kaun pairs and the decay into pawn-matter and antimatter pairs.

See also  Sultanate of Oman. A board game over four thousand years ago discovered by Polish archaeologists

The physicists comment that the recent results from the LHCb detector experiments provide an essential complement to our understanding of the difference between matter and antimatter. The Standard Model imposes limitations on breaking the symmetry between matter and antimatter. If many of these phenomena are observed, the result will be inconsistent with the predictions of the Standard Model, indicating the existence of new physics.

“The data presented in Bologna show that CP symmetry breaking rarely occurs in the case of enchanted mesons” – concludes Prof. Wiślicki. These results rarely contradict the Standard Model, which describes elementary particles and their interactions.

However, the physicists have made it clear that the discrepancy between the observed amount of matter in the universe and the predictions of our cosmological models remains visible even after the latest results are taken into account. So this is not the last difference between matter and antimatter. However, the mystery still does not have a complete answer. The physicists hope: “More evidence to unravel this mystery can be seen in the next stage of particle collisions at the just-starting LHC accelerator.”

Don't Miss it He defeated Andy Murray at Newport. The Australian made a surprise again
Up Next Dozens of foreign TV channels now for free in Poland! New rlaxx service launched