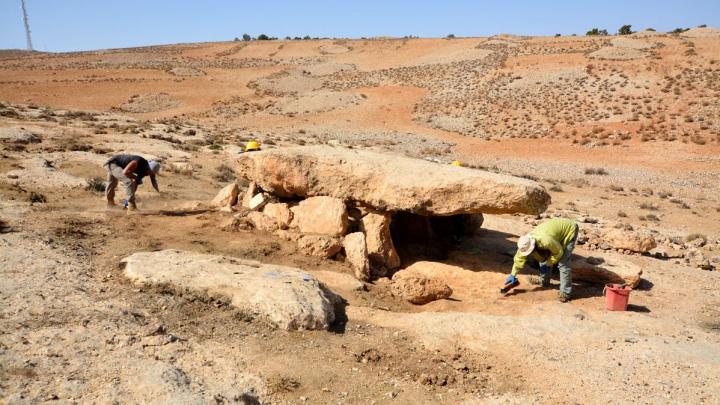 Fragments of pottery, flint tools and bone remains were discovered in Jordan by archaeologists from the Jagiellonian University under megalithic rocks dating back about 5000. years. Researchers believe that they may have been not only the burial places of community members, but also a place dedicated to rituals.

The press office of the University Science in Poland reported on the research by a team of researchers from Jagiellonian University, who worked for several years in southern Jordan.

The objective of the work was the so-called Dolmens field located near the village of Shobak. Dolmens are cemetery structures consisting of boulders placed vertically in the ground and a large boulder placed on them. Constructions of this type are also called megaliths (Greek: megas – large, lithos – stone). People built them in different parts of the world between the Neolithic and Bronze Age.

The creators of the structures from about 5 thousand years ago, located on a rocky hill, there were probably inhabitants wandering around the Arabian Peninsula. She might come back to them from time to time.

“In one of the dolmens we found a burial and some objects that may have been collected with the deceased. Hopefully, the lab tests will allow us to accurately determine when the deceased will be buried, and the genetic tests we are planning will bring us closer to answering many questions about gender, health, or the origin of the person buried here. Perhaps. Thanks to this, we will solve the mystery of the Jordanian megalith ”- says Dr. Piotr Kudzijk, head of the research, citing a university press release.

See also  New Technologies in Education Day 2022 - We invite you to participate! - Ministry of Education and Science

In the tombs, researchers have also found fragments of pottery and flint tools, and in many of them are bone remains, possibly from burials placed under stone statues.

The researchers were surprised to find a few dolmens that are not yet complete. According to archaeologists, they were abandoned at various stages of building construction, which allowed a fairly accurate reconstruction of their formation process.

“Thanks to simple tools probably made of wood and very uncomplicated techniques to rip rocks from a naturally eroded substrate and lift them up and anchor them with smaller rocks, it was possible to work in a small group to create these amazing structures relatively quickly. We now have to calculate their weight precisely to determine the number of people Who should be in such a + team + builders “- said Dr. Piotr Kołodziejczyk. In his opinion, the largest stone blocks weigh several tens of tons.

According to the researchers, it cannot be excluded that the studied dolmens were not only the burial place of community members, but also marked the ritual space and “organized it into a landscape”. As stated in the statement, this can be proved by the walls that limit the area of ​​​​the field of dolmens, and the mysterious pool several meters deep, discovered by Polish researchers.

Archaeologists in Krakow continue their work. By the end of November, they want to conduct preliminary analyzes of two more sites in the southern Jordan region. They also hope that thanks to the information collected from local residents, they will find more unknown rock structures.

See also  Wonderful properties of blueberries. It protects against dementia

Don't Miss it Katarzina Kawa finished her show in Midland. Krecz has finished his US tour
Up Next The Tesla driver made a stupid but subtle joke. A flood of demand for electricity has begun in Great Britain