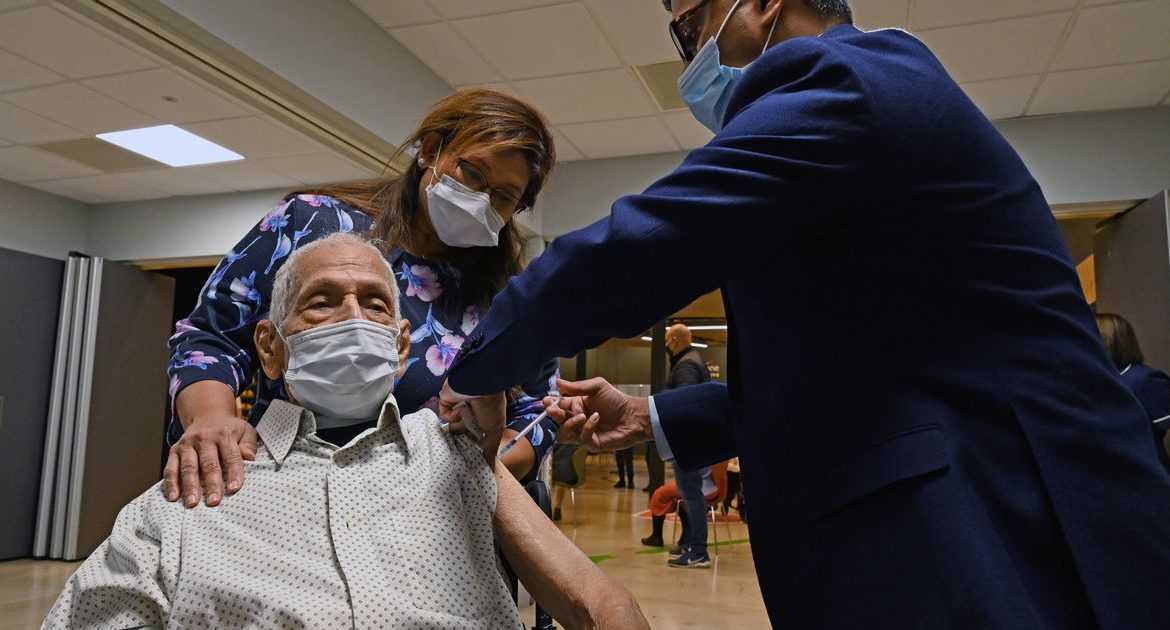 The coronavirus vaccine may run out by next month, former health minister Jeremy Hunt careful.

This morning, Mr Hunt revealed doses of the Pfizer vaccine, which tens of thousands of Britons receive every day, and are expected to dry up by the end of January with no new stocks until March.

He expressed his hope that the Oxford / AstraZeneca vaccine would be introduced at the same time to compensate.

“It (Oxford Stab) will make a big difference because the doses that we have of the Pfizer vaccine will keep us going until the end of January and I think we won’t get another shipment until March,” Mr. Hunt told the Today program.

“If we have the Oxford / AstraZenka vaccine ready to go through January, we can continue rolling it out at the current pace.”

In more positive news, a vaccine against the Oxford coronavirus was unveiled in Britain within days of Christmas.

The approval of the vaccine – which is being developed with the pharmaceutical giant AstraZeneca – could greatly accelerate the launch of the vaccine in the UK.

Britain has ordered 100 million doses of the Oxford vaccine, in addition to the 40 million Pfizer vaccine, which is already in use.

The Daily Telegraph It revealed last night that the latest vaccine must be approved just days after Christmas.

Even with adequate doses of the vaccine secured, how it is deployed is critical to the success of the pandemic response.

“I think the way the vaccine is being introduced is very encouraging, thanks to the wonderful network of general practitioners in this country,” Mr. Hunt said.

“There is one more thing that is very worrisome at the moment.

“This means that it appears that about 24% of all cases of coronavirus infection are picked up in hospitals, and it is possible that up to a third of infections in some hospitals will be caught in their hospitals.

“I think we need to consider the priority of the NHS staff in terms of when they get vaccinated.

“If you want to keep an 80-year-old safe, the best way to do that might be to vaccinate the healthcare workers who are caring for them in the hospital.”

The President of the Royal College of Practitioners Professor Martin Marshall said it will accelerate the launch of the coronavirus vaccination program in care homes if the Oxford-AstraZeneca vaccine is approved by the regulators.

“At the moment we are dealing with this Pfizer vaccine, which is difficult,” he told BBC Radio 4 Today.

“Assuming we will get approval for the most popular AstraZeneca vaccine because it is very similar to the flu vaccine, I think we will be able to roll it out at a much faster pace, but certainly over the next few weeks and the next two months we expect all care homes to be covered.”

Mr. Hunt went on to say that the government faces a “very difficult and finely balanced judgment” on whether to strengthen Corona Virus Rules.

See also  There was no place even for a Nobel Prize winner among the "giants of science". IPN: We don't forget about women

Mr Hunt, who now chairs the House of Commons’s Health and Social Care Committee, said that if ministers do not want to change the law, they should consider strengthening guidance on social distancing.

“It is a very difficult and finely balanced judgment. The biggest concern is what happens inside family gatherings and this is where the stakes increase,” he said.

“They have to respond to what is happening on the ground.

“I think they can be clearer about what is advisable and what is not recommended because it would be a colossal tragedy if we had a spike in deaths at the end of January / February because we got off the pedal near getting a vaccine.”

Mr. Hunt said he was on “the edge of the abyss” whether a third national lockdown after Christmas was needed.