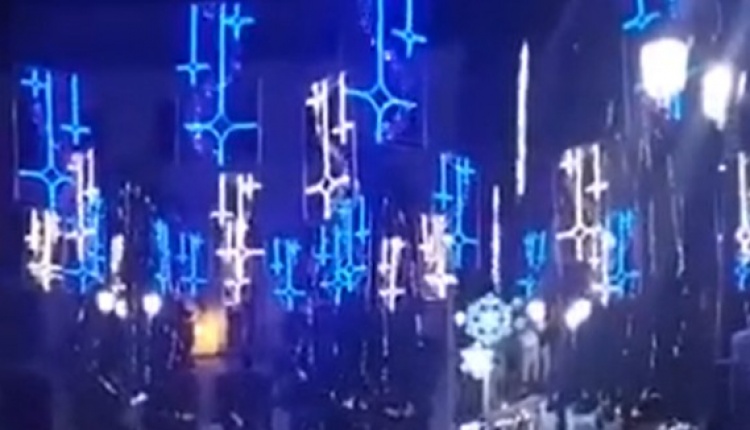 A birth scene with characters in the form of genitalia

In Spain, before Christmas, protests by Catholic organizations continued to insult religious sentiment with ornaments mocking symbols of faith. One of the controversies was between the Spanish institution of Christian lawyers and confectioners in the center of Seville, who posted on the site. Nativity scene with figures shaped like genitals.

pray to #GuadalubanaWho crushes the head of the snake to guide the hunters before it is too late.https://t.co/dSH9Gdq1tj pic.twitter.com/a1IWXab75P

– Look how they love each other (MiradComoSeAman) December 12 2021

In France, in cities ruled by left-wing and environmentalists, Christmas trees are replaced with artificial trees or sculptures made of glass and plastic. In the public space, due to the desire to maintain secularism, it is not possible to build a nursery or place images of Jesus or the Virgin Mary. In workplaces, schools, offices, media and shops, the French do not wish for a Merry Christmas, but a “merry and merry Christmas at the end of the year.”

In Malmö, Sweden, controversy aroused due to the Christmas decorations in the form of a gray and blue unicorn, six meters long. The statue as a symbol of the LGBT movement was first unveiled in the summer during the Pride Festival. Then the number is the colors of the rainbow. In a street survey conducted by SVT, residents found the winter unicorn figure “Kitch”. Its cost was also criticized – 1.2 million kronor (120 thousand euros).

In Finland, unicorns are not placed in yards, but there is a terrifying old man in dirty rags. This is Joulupukki, a character more traditionally associated with the Christmas period than the one known in St. Nicholas from Rovaniemi. Gray-haired grandfather or goat remains a current decorative element, for example in the form of felt figurines or straw Christmas tree decorations.

In Italy, RAI TV condemns in its popular show the light decorations of the cities, which are simply considered ill-considered, ugly and sometimes have sexual connotations.

The Bulgarians have a completely different problem. Sofia is the saddest city in Europe, according to Sofia residents. According to the Bulgarians, the only decorated Christmas tree in the center looks shaky, and the streets lack lights and garlands. Sometimes decorations can be seen in shop windows. These are New Year’s symbols or stars, reindeer or Santa Claus that are more associated with the consumer side than the religious side of Christmas.

Don't Miss it On Friday, Morawiecki will speak with Johnson about the situation on the Polish-Belarusian border
Up Next Android 13 is live for the first time. What does the new system look like?