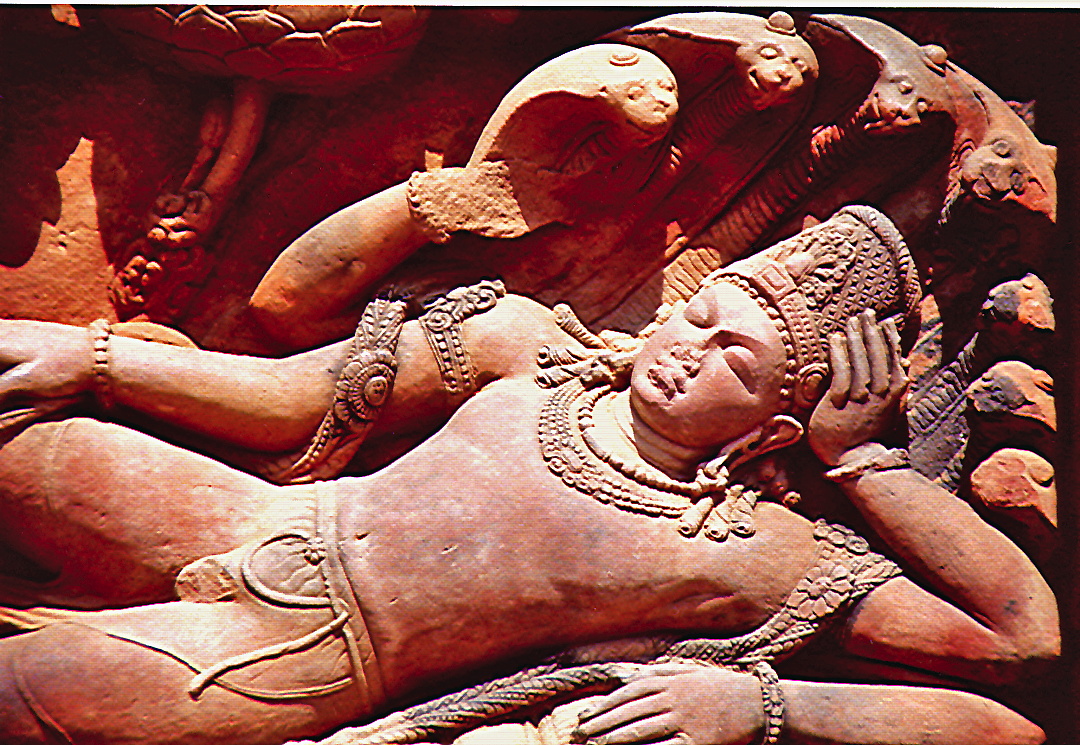 In Indian mythology, the king of the gods was Indra, the great warrior and hero who won many victories. He defeated, among other things, a terrible monster, the Serpent-Dragon Wrytrę, personifying drought, chaos and all evil. He wanted to celebrate the victory, so the heavenly builder Viswakarman ordered the construction of a new and magnificent palace. After a year of work, Indra despised the work of the craftsman, considering that his glory required something more perfect.

The builder complained to the other gods, and his grief reached the ears of the creator Brahma and the supreme god Vishnu.

The latter took the form of a boy in tattered clothes and visited the king of the gods. He laughed at the bragging king and introduced him to the sequence of worlds.

Specifically, each world has four eras that transcend east and west, during which it plunges into chaos, the dharma departs, and people succumb to corruption and lawlessness. Then be born again. These four centuries, 12 thousand years (but divine years), constitute one Mahayuga. A thousand such cycles make up the aeon, kalpa, or one day of Brahma, 4,320,000 human years. He has 28 other indras. Brahma himself lives 108 years of Brahma, consisting of such days and nights. Then he dies and a new one is born. And so forever. Every subsequent world is just a blink of an eye to Vishnu.

The eternal Vishnu floats on the surface of the primeval ocean, and infinite worlds sprout from the pores of his body.

A large column of ants entered Indra’s room, and the visitor announced that each of them was an Indra of one of the past realms. Seeing them, the King of the Gods finally realized his insignificance in the endless chain of life. He generously rewarded the builder of the palace and lost his mind.

In this meditation, we can leave it to the whole kalpa. The Infinite Emerging Realms are not only associated with Hindu mythology. Cosmology today paints a very similar picture.

As we can see, the universe is expanding. Einstein found it outside the equations, though he disagreed with them, linked to a vision of a fixed, unchanging, and perfect world. Then it was noticed that almost every galaxy is running away from us, and space itself is expanding.

And as it expanded, it used to be more focused. Maybe a point size at the beginning of time? This is how the concept of the Big Bang was created. Fred Hoyle coined the name to ridicule this fight concept, but it caught on. Then more questions arose: What was before the Big Bang? Some said: Other worlds appeared with another great bang and ended with a great collapse. An infinite chain of worlds – as in Hindu mythology.

Others have gone further. Well, our world is very flat and homogeneous. This can be explained by the cosmic inflation hypothesis: the universe was expanding much faster, flattening space and remaining homogeneous in a previously small area.

Then it was pointed out that inflation does not actually require a big explosion. Or that the part we watched, swelled to a gigantic size, was a whole part. So one can imagine a certain primordial space filled with some primordial matter which, like supercooled water, undergoes a phase change. Just like liquid water frozen to a few degrees below zero, which freezes instantly after you tap or pollen enters it, the space begins to swell at some point. Its small irregularities form clusters of galaxies. Another world as we know it is emerging.

See also  Modernity and technology in the latest studio design by Studio Quadra. This is the office of Allianz Partners

Among the inflated post-inflation bubbles, like our own, there is a primitive, but not inflated space, in which another bubble bursts again and again. In the pores of Vishnu’s eternal body, realms still arise and die.