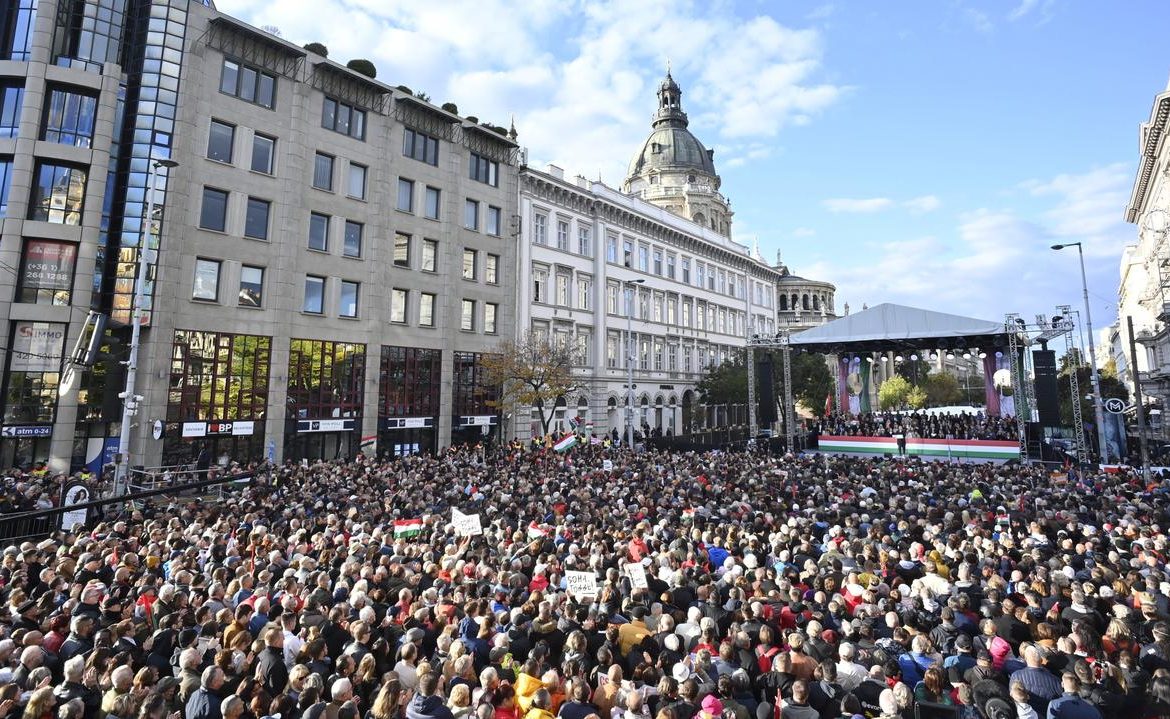 Tens of thousands of Hungarians gathered in Budapest on Saturday to commemorate the 1956 anti-Soviet uprising and to express their support for Prime Minister Viktor Orban ahead of parliamentary elections in 2022, the Associated Press writes. In his speech, which started the election campaign, Orban accused the European Union and the United States of interfering in his country’s affairs.

Participants in a pro-government demonstration marched towards the center of the capital, where Orban made a statement, accusing European Union institutions and US authorities of meddling in Hungary’s affairs, and called on their supporters to defend what his government had achieved for more than 11 years. in power. – What matters is not what they want in Brussels, Washington and the foreign media. He stressed that the Hungarians are the ones who will decide their fate.

– Brussels, as for the Poles, turns to us and treats us as if we were enemies (…) This is the moment for them to understand that even the Communists were not able to defeat us – said Orbán, referring to the 65th anniversary of the outbreak of the Hungarian uprising against the communist authorities at that time in the country.

– It is surprising that we are once again dealing with attacks from the West, which is constantly criticizing Viktor Orban. One protester told Reuters that next year’s elections will show whether Hungary will remain a sovereign country or dissolve in the Islamic sea.

Orbán supports anti-immigration rhetoric and has repeatedly clashed with Brussels, which accuses him, among other things, of restricting media freedom. He also opposes transferring more powers to the European Union, but stresses that it is in Hungary’s interest to remain a member of a strong community, according to Reuters.

Candidate for a united opposition: This system has become unsustainable

On the same day, a coalition of six opposition parties convened in the Hungarian capital. During the event, the united opposition candidate for prime minister in next year’s election, Peter Markie Zee.

He declared that if he wins, his government will create a new constitution, crack down on corruption, implement the euro, and guarantee freedom of the media. – This system (Urban government – ed.) has become morally unsustainable – he said.

He appealed to the opposition for more unity. – It’s all about one question: Fides or no Fides – emphasized, referring to Orbán’s party.

A coalition of six opposition parties in Hungary

For the first time since Fidesz came to power in 2010, the six largest opposition parties emerged – the Hungarian Socialist Party (MSZP), Jobbik, environmental party Polityka May Be Different, Liberal Momentum, Democratic Alliance (KD) and Environmental Liberal Party. Dialogue – He decided to form a coalition before the parliamentary elections and held primaries in which he chose his candidate for prime minister in the 2022 elections.

Marki Zay, a 49-year-old non-partisan conservative, entered the Hungarian political scene three years ago when he won early municipal elections in his hometown of Hodmizovasarhli in southern Hungary. Previously, his public role was limited to the Catholic community and the local school’s parent club. He describes himself as “the frustrated good guy”. As he says, he supported Fidesz and was deeply affected by the collapse of his first government in 2002, but over time he no longer supported this party, including. Because of corruption in its ranks.

According to opinion polls, support for Fidesz and the opposition coalition is level, and about 25 percent of respondents are undecided, Reuters reported.

Don't Miss it Saudi Arabia wants to protect the environment. The heir to the throne announced an ambitious plan
Up Next Quality or performance mode? Video comparison