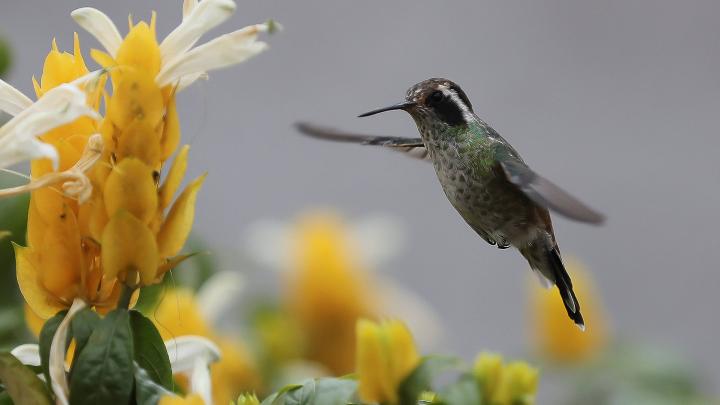 Hummingbirds have a surprisingly good sense of smell and use it to detect threats to them, according to the Journal of Behavioral Ecology and Social Biology.

Until recently, it was believed that birds, with the exception of the flightless kiwi, do not use their sense of smell. But later it turned out that they had a sensitive sense of smell. Very sensitive, comparable to dogs, like eagles. A good sense of smell is due to the large olfactory bulbs – brain tissue that responds to smell.

However, researchers from the University of California, Riverside (USA) have shown that hummingbirds not only smell insects, but also the smell can help them avoid dangers while searching for nectar.

More than 100 hummingbirds were allowed to choose between two feeders: sugar water alone – or sugar water and one of several chemicals whose smell indicates the presence of an insect. In none of the experiments, there were no visual differences between the two feeders.

The test scents include the scent of European bees left on the flowers, an alluring substance secreted by Argentine ants, and formic acid, a defensive compound produced by some ants that causes pain when it enters the eyes or exposed skin.

Hummingbirds avoided both chemicals for ants, especially formic acid. However, they did not react at all to the smell of honeybees, which is known to prevent other bees from visiting the flowers.

To make sure the birds react to the chemical itself, and not just fear new odors, the researchers conducted additional testing with ethyl butyrate, a commonly used human food additive that has a fruity-like odor. However, its smell did not bother the hummingbirds.

“This is very exciting because it is the first time it has been shown that hummingbirds use only their sense of smell to make feeding decisions and to avoid contact with potentially dangerous insects at the flower or feeder,” said Erin Wilson Rankin, professor of entomology and entomology. Study co-author.

Rankin typically studies food interactions or, as he explains, the science of “who eats who” in nature. “Hummingbirds and insects can compete for flower resources,” she said. “Their foraging decisions help us understand how the ecosystem functions and which activities may ultimately be necessary to protect nature.”

As indicated, the study raises new questions about the underestimated importance of the sense of smell in decisions made while foraging for birds, especially hummingbirds (PAP).

Don't Miss it The Slovenian kicked out the top-ranked Croatian woman. Julia Putintseva promotion
Up Next Bryce Dallas Howard is behind the camera in the new edition of Navigator’s Escape