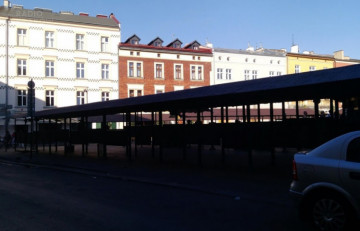 This could be the opportunity for a new opening for Plac Nowy in Kazimierz in Krakow. On April 1, the Roads Administration began consultations on land development and new traffic regulation in this place. Based on the comments of residents, businessmen and visitors to the square, the company prepares three concepts from which the best are chosen. Officials make it clear that they want to eradicate the temporary plant with flowerpots, and city activists fear that the change in traffic regulation will bring nothing to the situation on the field, which has long ceased to be Kazimierz’s masterpiece.

Roads department wants to organize the space and expects those participating in the consultations to clearly indicate the direction of changes. As Michał Pyclik says, developing new solutions may not be so easy. “The expectations of the residents are somewhat different, those who deliver the goods, the other people who rest there. The problem will be the regulation of traffic and the regulation of parking around the square. There is also the question of everything that is underground, what materials we can use, and reconcile fixtures, which Is in line with expectations for green spaces “- he adds.

Comments can be submitted in the form of questionnaires until April 16th. On their basis, the designer will prepare three concepts that will be presented at a meeting with residents. After considering the suggestions and objections, the company will present the final idea. As Pyclik asserts, this would solve the pots problem which had aroused objections, among other things, by the provincial governor of antiquities. “They are still there and they separate some pedestrian spaces. We have a changing traffic organization. It works. The question is, should the square that works this way be the goal? Something that needs to change? Allocate more or less space for pedestrians and cars? Which is to show how can it be done?” Arrangement of this square. Depending on the concept, design work is carried out and then implementation “- says Pyclik.

Local activist Marek Grochovic has expressed doubts about the feeling of these consultations, asserting that without a decision on Plac Nowy’s new job, the change in traffic regulation will not have the expected effect. The entire field area was untouched by the consultations. Engineers plan to talk about the whole, even though it is not the goal of the city council. This raises my concern that talking only about the surrounding space might lead to something partial done, but the square will remain in the current square. Visually neglected and in terms of functionality, ” – he adds.

Thomas Daross, Chairman of the Old City District Council, expressed a completely different opinion, believing that the consultations are an excuse to start talking about the future function of the field and an opportunity to explain to residents the limitations that appear in this. Void. “First, we get an answer from the residents about how they envision Plac Nowy in the future. Residents find out how the parking spaces are allocated, and where they might be. We can’t draw everything on a piece of paper and the office will set it up that way. There are legal rules about the show. ., Places for pedestrians and cars. It’s also a matter of space for café gardens “- Darros says.

The final concept for the space redevelopment around Plac Nowy will be ready in June. If funds can be found in the budget, work can begin at the end of next year.

There is a button at the bottom of every article on our site, thanks to which you can send e-mails containing your opinions. All of them will be read carefully and will not remain unresponsive.

Reviews can also be sent directly to the following address: opiniokrakow.pl

Don't Miss it An extraordinary space party. NASA turns data into voice [Wideo]
Up Next Netflix – Top 10 in Poland this week! [22.03-28.03] Computer scientist