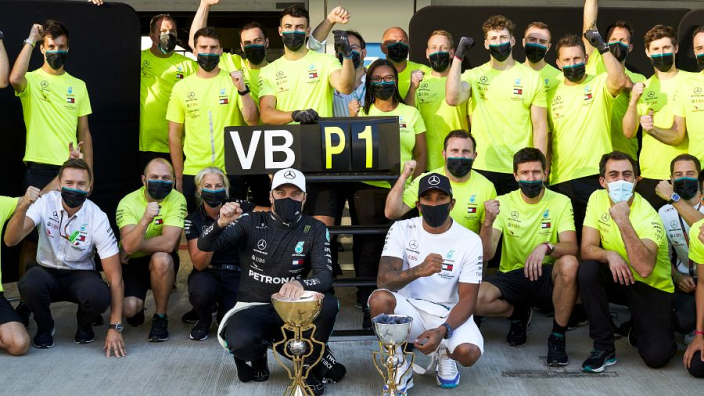 Lewis Hamilton He thinks and Mercedes Need to start a “blatant” race for the remainder of this Formula 1 season after initially claiming that the FIA ​​was out in order to get the team.

After the Russian Grand Prix in which he finished third, Hamilton left the Sochi Autodrome and is a distinctly frustrated figure after being kicked by two five-second penalties by the hosts for violations of starting training before the race.

After a missed penalty for Hamilton in the Italian Grand Prix that also damaged his race there, this initially led to him declaring “they are [the FIA] They are trying to stop me, aren’t they? “

When asked to clarify whether he really believed he was a target, Hamilton pointed to the fact that Mercedes definitely showed up for the boardroom.

“They change the rules, like engine registers, and lots and lots of things to get in the way to keep the race exciting, I suppose.

“I don’t know if the rules – in terms of what happened [in Sochi] – It was anything to do with it but that is the natural feeling, as if we were fighting uphill.

“But it’s okay, it’s not like I’ve never experienced adversity before, so we’re just turning our heads down, keeping fighting and continuing to try to do a better job and be cleaner and cleaner.”

Hamilton also initially earned two penalty points for his super license – one for each offense – which brought his total score to 10 over the past 12 months and left him shy of a race ban.

After the revision, however, The hosts chose to cancel those points and instead fine the team 25,000 euros.

Hamilton still feels he and the team should be whiter than whites, adding: “We will review the rulebook and choose areas where they can set the rules, and areas where no penalties have been imposed before.”

We’ll try to figure out everything they have and try to make sure that we cover ourselves in the ones we know.

“We’ve had seasons before without penalty kicks so we just have to make sure that I don’t give them any reason, not even a sniff, to be able to do something.”

Sainz hits Sochi corner, saying “It shouldn’t be there”