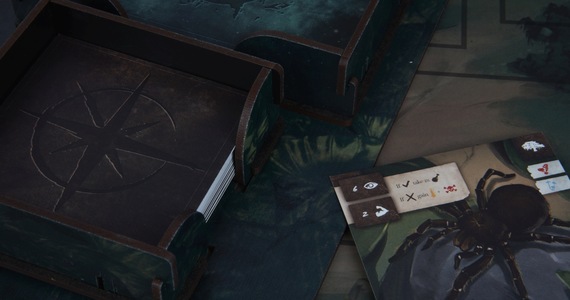 The creators of Galaktus Games recently prepared a series of video materials explaining the mechanics and rules of the game and what the gameplay of this co-op survival game looks like. The first positive reviews also began to appear in the media. People who decide to support the project on the first day will get a unique dice tower for free.

Green Hell: The Board Game is a cooperative survival game. Jake, known to all fans of the PC version, is stuck in the Amazon jungle in search of his missing wife and trying to survive in this hostile harsh environment. The goal of the players, members of the search and rescue team, is to find him. Each player has a specific set of skills necessary for the survival of the entire group. Survival expert, paramedic, guide and scientist – only well-coordinated cooperation will allow to successfully complete the mission.

The first materials about the game prepared by the creators of board games daily are already available on the web. The Galaktus Games team visited the Polish channel ON TABLE Gry Planszowe to play a game with its creator on Green Hell: The Board Game. They also had the opportunity to test the game, among others, the authors of Not Bored Gaming Channels from Great Britain and PottGamer – Boardgames from Germany. Both shared their positive impressions of the game with their viewers. Mark from Not Bored Gaming notes the satisfying level of difficulty of the game.

Those who are waiting for the campaign to start can also watch the video materials posted on the Galaktus Games channel, from which they will learn how to prepare for the game.

Due to the fact that Green Hell: The Board Game offers players a high level of unpredictability thanks to the innovative system for creating an expanding forest, based on a modular pseudo-random map configuration, it is very important to learn the most important mechanics and rules. In the movie about rules, Matthews “Vik” Sochoń – the game’s lead designer – will present, step by step, the rules that govern the world of Green Hell.

The jungle and the challenges that await the rescuers will be different in each game, making the game a unique experience. However, in the latest movie you can see what the full session of Green Hell: The Board Game looks like.

Dice tower in Green Hell: The Board Game
/press material

Don't Miss it Cellular changes on the ocular surface may be a sign of ‘long Covid disease’
Up Next Tokyo 2020: Women’s volleyball: USA – Turkey. Live coverage and score