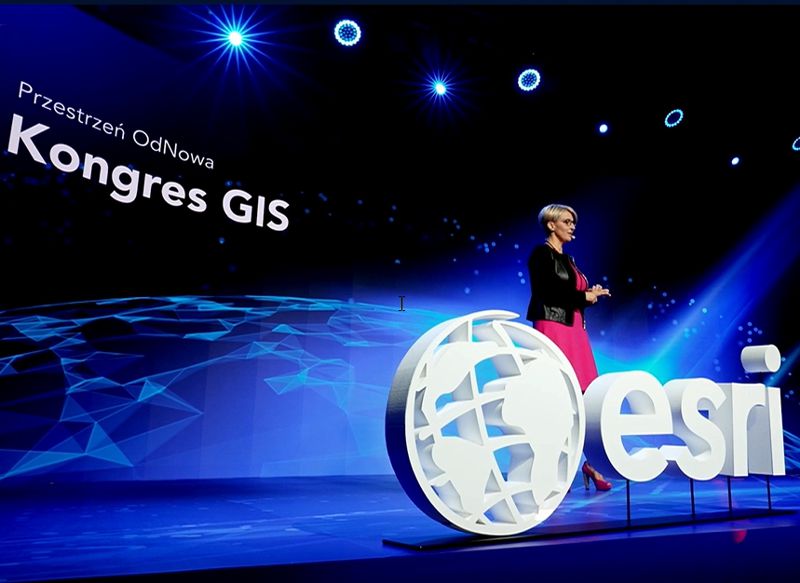 It is impossible to solve humanity’s most pressing problems without experts in the field of GIS – assure the organizers of the GIS Conference – the national conference for users of Esri software, which began today (September 28).

This year we are seeing the amazing impact of geospatial technologies on activities related to the COVID-19 pandemic. But GIS is also playing an increasingly important role in applications related to climate change and biodiversity protection, and in general in increasing efficiency and interest in sustainable development – said the Esri Inc founder. And its president for the participants in the virtual conference. Jack Dangermond.

Referring to the slogan of the GIS Conference 2021, New Managing Director of Esri Polska Agnieszka Nosal In turn, she indicated that after more than a year of closing the epidemic, today we started building space from scratch. In this space, we combine the digital world and the real world. GIS has been doing this right from the start. She said this was their DNA. At the same time, she emphasized that she is proud that Esri solutions have played an important role in the fight against the coronavirus – both in Poland and globally.

Beata Janowczyk of the Government’s Center for Security has spoken extensively about the role of GIS during the pandemic, introducing the National GISCOVID-19 System. In recent months, each pole may have used its own publicly available items. These include online maps based on ArcGIS Online that display statistics about a disease or the progress of a vaccination program. But this system also has a large part that is not available to the average citizen. They enable, among other things, accurate localization of isolated people or modeling of the evolution of the pandemic depending on the actions taken.

As confirmed by an RCB representative, GISCOVID-19 is under continuous development. Currently, in Mazowieckie County, a solution is being trialled to monitor hospital bed occupancy. With a few movements of the tablet, the nurse will be able to enter information about a vacant place in the hospital, which will be immediately visible, for example, to an ambulance dispatcher. This will prevent situations like the one we’ve seen in previous months where ambulances roamed cities looking for vacant beds for COVID-19 patients.

But there are many more pressing problems that can be solved using GIS tools, as discussed in detail by participants at this year’s GIS conference. For example, on Day One, Anna Girac of the National Veterinary Institute explained how the Esri program helps identify places most at risk of a bird flu epidemic. Agnieszka Gajda of the Institute of Urban Development and Regions has shown how GIS allows us to comprehensively track the spread of cities – not only the process itself, but also its negative effects, such as uneven income distribution, ‘cohesion’ or long commute times or schools. In turn, Tomas Stachora from the University of Agriculture in Krakow explained how GIS tools help in accurately indicating which plots of land are most suitable for building PV installations.

Census data soon at your fingertips

This year’s GIS conference coincides with the final days of the national census. The result of this undertaking will be a huge amount of detailed data about our country. How do you control it and take advantage of it in practice? Of course, using GIS.

As Janusz Dygaszewicz of the Central Statistical Office explained, this institution is in the process of implementing a project PDS (“Spatial Statistical Data in the State Information System”), which will provide a wide audience with easy access to census data. The implemented electronic services will allow not only to view these resources (also on mobile devices), but also to create a variety of thematic maps or perform complex spatial analyzes.

An integral part of the GIS conference is the introduction of new products in Esri’s ArcGIS software package. This year, the case was briefly presented by Wojciech Gawecki, who works at the company’s headquarters in California. He emphasized that Esri is not only focused on implementing new tools, but also on continuous improvement of software performance. In addition, the company is more and more focused on providing its users with easy access to spatial data – base maps and thematic records. The most recent examples are A global land cover database with a resolution of 10 meters.

Among the new products, attention was drawn to, among others, the so-called instant applications that allow you to easily convert 2D and 3D maps into interactive visualizations. Esri now offers dozens of these products.

As he summed up his talk, these and other GIS tools are certainly not a panacea for all human problems, but without them, the struggle with these challenges would be much more difficult. Our world is being tested on many fronts. As GIS professionals, we are responsible for its future. Geographical approach and geospatial infrastructure provide us with the science and practical ways to operate effectively, he said.

This year’s GIS Conference is taking place after a break of four years. Due to the epidemic, the event is limited to the distant form. The conference will run through Friday, and will feature presentations by representatives of many different industries – from forestry, through surveying, energy, water and sanitation, to representatives of local governments and the world of science.

The media sponsorship of this event was provided by the editors of GEODETA Monthly and the portal Geoforum.pl.

See also  Comet Leonard was captured by a NASA satellite. The video shows "explosions".
Don't Miss it Battlefield 2042 – Beta Tests Begin, Another Leak Confirms History
Up Next Great Britain. A private plane evacuates animals from a shelter in Kabul