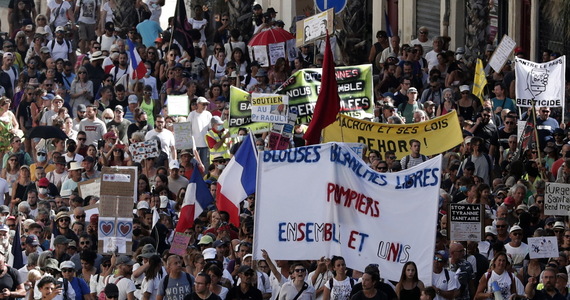 Collective Le Nombre Jaune, which publishes data on protests in cities, estimates that at least 319,290 protesters have gathered for protests across the country.

About 220 demonstrations began in the early afternoon in the country’s largest city. Apart from Paris, the two most important events took place in Montpellier (9.5 thousand people) and Mulhouse (about 5.5 thousand people). Large protests were also recorded in Rennes, Lyon, Lille, Toulouse and Perpignan.

– I’m not against the vaccine (on COVID-19 – ed.), but against health passports – said Patriot member David Vidal Bonsard, former member of the far-right National Front party (now National Union), who gathered protesters in front of the Military School in Paris .

The “yellow vests” movement organized a competitive demonstration in the capital. Participants denounced the “propaganda” they believe the French media and government are spreading about COVID-19 vaccines.

“A vaccine is not the answer,” protested retiree Helen Verondels argued. “Instead, we should stop removing hospital beds and continue to respect sanitary rules,” she added.

Until 19 the police arrested 16 people, including two in Paris. Three officers were slightly injured during the demonstration.

Last week, Health Minister Olivier Veran announced that the obligation to show health passports in public could be extended beyond November 15, the limit set by law.

The health corridor is in effect from July 21 for people who go to places of culture and entertainment, and from August 9 at the entrance to cafes, restaurants or trains. From August 16, it must also be served in many shopping centers, and from Monday it will be required of employees serving customers. An employee who refuses to submit this certificate may be suspended from performing his duties.

The trade union of the famous Galeries Lafayette department store in Paris called an indefinite strike against workers’ health passports. One point of contention between the union and management is the creation of a skip-line feature to work for vaccinated workers, not for those who are due to provide a coronavirus test.

“Events”: scandalous behavior of tourists in the Tatras
polsat news

Don't Miss it United States of America. teenage murders in california
Up Next A final photo was needed in the Polish finals!