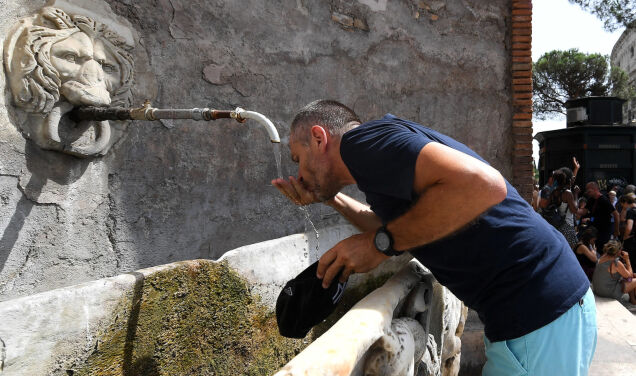 Two people died on Wednesday in fires in Calabria and Sicily in southern Italy, where record temperatures were set. In many parts of the country, firefighters are putting out flames. The situation in Calabria is described as tragic.

In Calabria, near Grotria, a 76-year-old man died when his house caught fire and collapsed in a forest fire.

The fires in this area have been going on for several days and it was the worst situation in the Aspromonte National Park. Almost completely cut off from the world is the sanctuary of the Madonna dei Bolsi in the municipality of San Luca, near Reggio di Calabria. Traditionally, pilgrimages take place there during this period. The surrounding roads were closed due to the fires.

Fires are burning in Sicily. A 30-year-old farmer trying to put out a fire has died in Paterno, near Catania.

The temperature record can be broken

There is a great fire hazard across Italy due to the extremely intense heat – the temperature exceeds 40 degrees.

Italian meteorologists said a record temperature for Europe may be recorded in Syracuse on Wednesday afternoon. At about 1 p.m., the thermometers were supposed to read 48.8 degrees Celsius. They added that everything indicates that this is a new European record of all time.

However, the reports must be confirmed by the World Meteorological Organization (WMO).

– If these data are confirmed, it could be the highest temperature recorded on the European continent and at the same time break the previous record of 48 degrees in Athens on July 10, 1977 – said meteorologist Manuel Mazzolini from the 3BMeteo portal.

See also  The left wing wants to limit Elbieta Witek's powers. There is a draft decision on the committee convening policies

According to unofficial information reported by the Italian media, in August 1999 in Catinanova, Sicily, the temperature reached 48.5 degrees Celsius.

The outlook is not optimistic

There is no sign of calm in the weather forecast. In Sicily, the temperature can reach 49-50 degrees. In other regions in the south: in Calabria, Puglia, Basilicata and Campania it is expected to reach 42 degrees. Until at least Sunday, temperatures are expected to reach 40 degrees in Tuscany, Lazio and Emilia-Romagna.

The highest heat warnings went into effect on Wednesday in Rome, Bari, Campobasso, Frosinone, Latina, Palermo, Perugia and Reti. Bologna and Trieste will join these two cities on Thursday. On Friday, the state of alert will be extended to other cities.

>>> More about heat in Italy: Lucifer will treat Italy up to 50 degrees Celsius

Don't Miss it USA: There are no contraindications to vaccinating pregnant women against Covid-19
Up Next Axiom Verge is rated 2. Reviews confirm that Thomas Hub took the opportunity