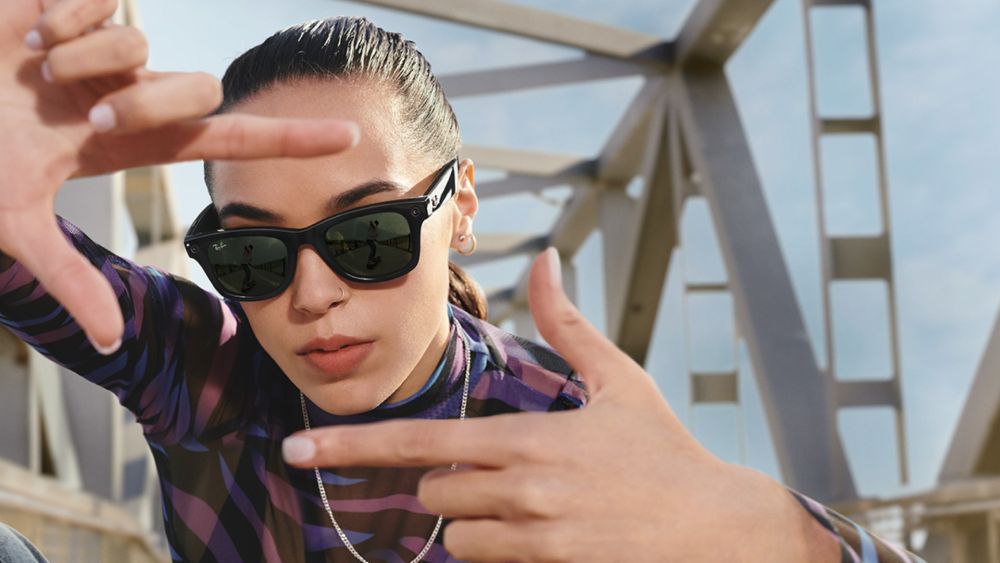 The glasses will be available in the US, Australia, Canada, Ireland, Italy and the UK in 20 different variants, starting at $299.

Photos and 30-second videos can be captured using the shutter button and hands-free thanks to Facebook Assistant voice commands.

Once the camera is started, the LED will light up to let others know A video or photo is recorded. The glasses also feature simplified in-ear headphones, and Ray-Ban Stories’ three-microphone array provides better sound quality for calls and video recording. Beamforming technology and noise cancellation algorithm ensure good call quality.

FB reports that the glasses are connected to the new app Facebook View allows you to share stories and memories with friends and followers on social media. The app is available for iOS and Android devices. It makes it easy to edit and share the content your glasses capture and import it to apps like Facebook, Instagram, WhatsApp, Messenger, Twitter, TikTok or Snapchat. It also allows you to save photos and videos to your phone and edit or share them from your device.

Ray-Ban stories are available in twenty different types, including the most popular Ray-Ban styles – Wayfarer / Wayfarer Large, Round, and Meteor. You can also choose from five frame colors and match your chosen lenses – clear, sun control, photochromic and prescription.

The equipment will come with a specially designed one Portable Charging BagSo you can easily charge and protect your glasses while on the go. A fully charged case allows you to use the glasses for three days in a row without having to plug the case into a power source.

See also  Queen Elizabeth abdicates the throne? The biographer announced when the British monarch will abdicate

Facebook notes that in the case of Ray-Ban Stories, miniaturization was key. Ray-Ban’s parent company, EssilorLuxottica, worked closely with Facebook from initial concepts to final design integrating smart technology into a well-known format.

The individual components must be redesigned so that all parts of the glasses fit, such as two cameras, a small speaker array, an audio system with three microphones, an improved Snapdragon processor, touchpad, battery and more. Smaller space and create light frames. The shape of the glasses was a significant factor influencing individual decisions – from building speakers to choosing a camera.

Another challenge was the placement of the charging port. The solution was the hinges, which are also a charging port after inserting the glasses into the case. Thanks to 20 validation tests for each model, it was possible to standardize the eyeglass arms and tailor the individual elements to fit each frame model. Ray-Ban Stories sunglasses weigh only about five grams more than the original Wayfarer model.

Facebook is said to have taken care of, among other things, hardware security, such as the camera switch and microphone or the aforementioned LED that lights up when a photo or video is being recorded.

The Facebook View Dashboard allows you to customize your privacy settings, including your preferences for importing and sharing photos and videos.

By default, Ray-Ban Stories glasses collect data necessary for proper operation. For example, information about the battery charge status to notify the user when the battery level is low, or the email address and password for logging in to FacebookTo verify your identity when you log into Facebook View.

You can also opt in to share additional data with Facebook — for example, information about the number of photos taken or the time you spend shooting videos — to help improve and personalize your products. Consent to provide additional data can be changed at any time. Using Facebook Assistant to control the glasses using voice commands is completely optional.

According to the announcement, Ray-Ban Stories and Facebook View glasses are devoid of advertising content. Photos and videos will also not be used to personalize ads. However, if an image is shared with an app, it will be subject to their terms and conditions.

For more privacy, the photos and videos stored in the glasses are encrypted. Ray-Ban Stories can only be paired to one account at a time, so if it gets lost and someone tries to pair it with a new phone and Facebook account, any data and media stored in the glasses will be automatically deleted.

The road to augmented reality glasses

According to the release, Facebook Reality Labs’ mission is to create tools that “help people communicate with each other anytime, anywhere.” Virtual and augmented reality is another platform that puts people at its core. Just like modern computers and smartphones, augmented reality can help you cross physical distances between people and connect with others, thus creating the impression that you are next to a particular person – no matter where they are now.

EsillorLuxottica shares a vision of wearable technologies that will completely change the way we communicate with the people around us.

Controversy is a misunderstanding?

See also  Green Hell: The Board Game - Kickstarter campaign will start on August 3

In an online chat, some netizens asserted that the use of Ray-Ban Stories may violate legal rules regarding the recording of images in public places, and the question of data collected by Facebook raises concerns.

On the other hand, the press office of Facebook Polska, in response to questions about the aforementioned controversy regarding privacy and data protection, responded to CyberDefence24.pl that “Privacy concerns with the new glasses are completely transparent.”

As we’ve heard about glasses to prepare the video, the user must play back the recording – as in the case of a smartphone, Go-Pro, dash cam, handheld camera, compact digital camera, or SLR.

The photo or recording is subsequently transferred to the smartphone’s memory, where it can be shared, for example on Tik-Toku or Instagram Stories, just as in the case of recordings from all types of these devices.

Don't Miss it IKEA is a global festival
Up Next What about GDP and inflation? There are expectations for the head of the NBP