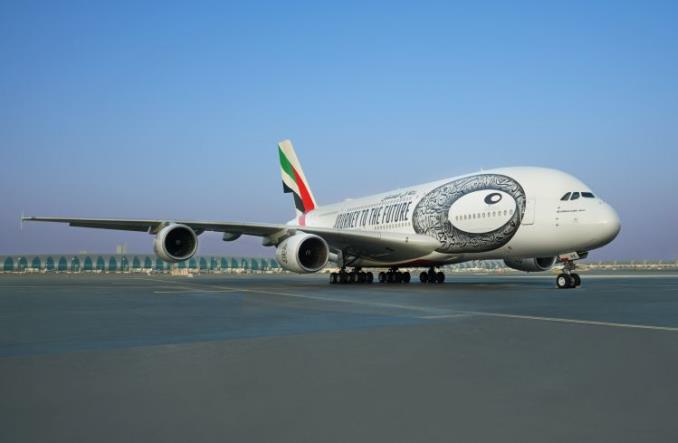 The first re-designed Emirates A380 (A6-EVK) has flown to Los Angeles. Like nine other A380s that will leave a new design for Emirates Engineering’s aircraft appearance center in the coming weeks, it will be used on flights to Europe as well as to major Arab regional cities.

This initiative underscores the ongoing commitment to support Dubai’s vision to be the leading city of the future, a hub for innovation and a testing platform for the latest technologies. It is also an expression of 50 years of development and progress in the United Arab Emirates.

Considered ‘the most beautiful building in the world’, the seven-storey, columnless, elliptical Museum of the Future is one of Dubai’s undisputed wonders and aims to inspire the world to imagine the possibilities of tomorrow through fascinating installations and futuristic experiences. Inside the ring there is an empty space that symbolizes unknown and as yet undiscovered knowledge.

The museum will also serve as an incubator for scholars, thinkers and researchers to bring bold ideas and visions to reality, particularly in areas such as sustainable development, space, health and other vital challenges facing the world today. It will also be a platform to test and showcase the latest technological discoveries or prototypes made by new startups and recognized technology companies.

This ring-shaped building, decorated in Arabic calligraphy, is depicted on both sides of the aircraft and is accompanied by the logo “Future Flight” on the fuselage, and occupies a total area of ​​336 square meters on board the A380. The carrier will produce ten Super Jumbos in this robe and fly to nearly 30 destinations around the world early next year, spreading the Museum’s message of building a better future now.

See also  Cow science is flourishing in India. The entire country is preparing for a national test of knowledge about sacred animals

Don't Miss it slag. Two contenders did not show up for the Apator’s compulsory training
Up Next Secret Festival for the first time in Poland. where? when? Who will play?