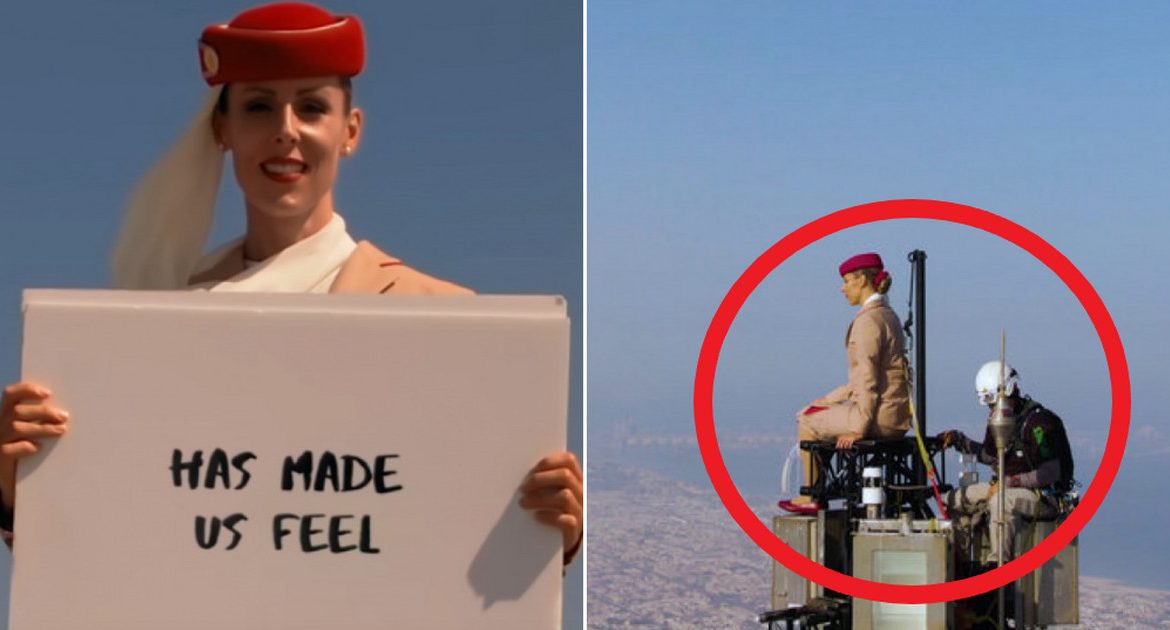 The 30-second clip begins with a close-up of an Emirates cabin crew member holding a sign. As in the famous scene from the 2003 movie “Love Actually.”. With the camera zoomed out, viewers quickly discover that the flight attendant is wearing the iconic red hat and Emirates uniform Standing at the top of the Burj KhalifaRevealing a panoramic view of Dubai.

This is what the ad looks like. Fabulous, isn’t it?

How was the Emirates advertisement for Burj Khalifa filmed?

The ad was filmed without the so-called green screen or special effects and was the result of careful planning, training, testing, and adherence to strict safety protocol procedures. To maneuver over the building They moved on a reduced area of ​​only 1.2 meters at a height of 828 meters. The Emirates cabin crew was screened to select a candidate, and while there were many willing and suitable people to do the job, a professional skydiving instructor was commissioned to ensure the highest level of safety.

Throughout the filming and preparation for filming, safety remained a top priority. At the top, a special platform with an attached bar is built, on which you can stand. It was attached to the shaft, as well as two other different points, directly to the gable by means of a Belts hidden under the Emirates uniform.

Filming began at sunrise to capture the “Golden Hour” and the team, including the main character in the ad, began climbing to the top before sunrise. Climbing from level 160 at Burj Khalifa took 1 hour and 15 minutesThe team had to climb several levels and stairs inside the building to reach the top.

The crew stayed on top for five hoursThe hero of the clip was wearing a seat belt, which was covered in Emirates uniforms and attached to a custom-made platform. This, in turn, was attached directly to the top of the building. A drone was used to record the material in a continuous shot.

An advertisement recorded at an altitude of 828 m above the ground It is one of the most recorded commercials ever. It is developed and managed by Emirates’ in-house branding team with support from Dubai-based Prime Productions AMG.