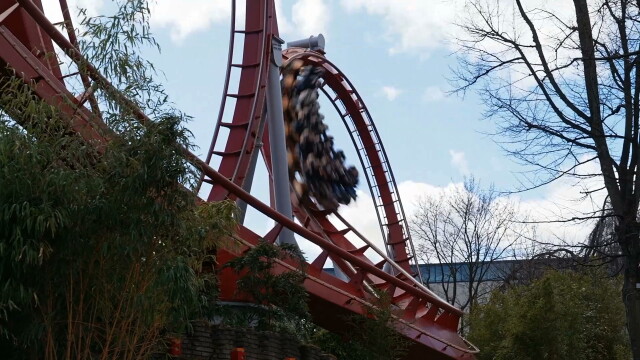 Denmark has just introduced Covid passports, which, however, are not the same as the vaccination certificate or the so-called vaccine passport. Not only people who have been vaccinated can get it, but also people who have recently had an infection and can document it, as well as those who have had a negative coronavirus test no older than 72 hours.

– It does not cost us anything, and it allows us to enjoy life as before, and get to know people. This is a good solution and not completely cumbersome – says Danish Ane Katrine Apel. He is very wise because it gives you the opportunity to get back to what we used to do. We had a very long lockdown. The possibility of going to such a place means a lot to us – comments by Karin Ottosen. Both women visited the amusement park.

Coronapas – as the system was called – is actually completely uninhibited. Even if someone is unwilling or unable to get vaccinated, they can still get the test. It’s completely free in Denmark and available immediately.

As long as vaccinations allow people to move freely in society, they may be discriminatory. That is why this cannot be said about the Danish passport – says the professor. Michael Bang Petersen, Professor of Political Science, Aarhus University.

Danes with Coronapas can not only enjoy entertainment, but also services – for example, going to the hairdresser. For accepting a customer who does not meet the conditions, entrepreneurs face high fines – up to 6,000 euros.

– We have to check everyone and sometimes it’s a little awkward if someone doesn’t know the rules very well and comes up with an old test. We’re sorry, but we can’t service these clients – Ciprian Maftei hairdresser explains. One of his clients adds, “It’s socially important that things finally open up a little bit with Coronapas.”

Further easing is expected soon. From May 21, museums, cinemas, theaters and restaurants will open. At the same time, the government has commissioned work to improve Coronapas to make it completely safe.

The next step is to develop a custom app that also meets the highest possible privacy standards. We don’t necessarily want others to know if I could do something because I got vaccinated, because I had the disease or because the test was negative. It suffices to know that someone has the green light – the professor describes. Michael Bang Petersen.

It is our duty in the European Parliament to make sure that our citizens have a fast, easy and trustworthy way to show that they meet these requirements, that we will not have 27 different systems, and that there will be one clear and simple system that shows that he or someone has been vaccinated, either he is a healer, or He underwent a test, he believes, Dutchman, European Parliament member Jeroen Leiners

Community nations have already agreed to such a system, based on the same Danish Coronapas principles.

I would like to make it clear that this is not a passport for a vaccine as it is often heard. Our proposal confirms that vaccination should not be a precondition for freedom of movement, as Justice Commissioner Didier Reynders stresses.

We consider it a tool for coordination or assistance in coordinating the abolition of border controls. This can prevent clutter and may also prevent discrimination, says Dutch Tineke Strik.

In Denmark, international visitors are already a consideration. In normal years at this time of year, they made up 30 percent of all theme park visitors.

We look forward to our international guests. Of course, Casper Schumacher says, it would be a big step for us to see European and non-European visitors again.

Perhaps your European digital certificate is your passport for holidays.

See also  Deputy Prime Minister of Great Britain: There will be sanctions if Russia tries ...
Don't Miss it 10 ideas for setting up a background for an online conversation. We can deal with the lack of space
Up Next Szczecinek International. So partners from China to the United States [zdjęcia]