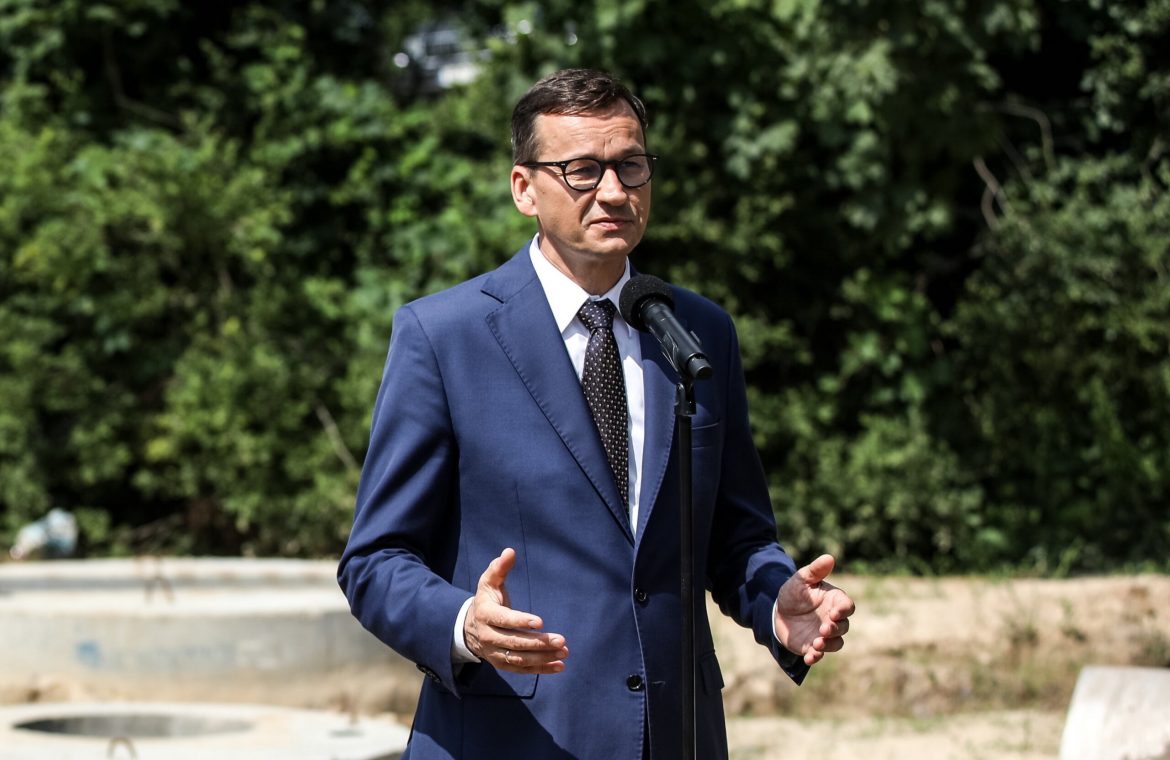 On July 19, at a press conference held in the Mediziana Jura in the Territory. Świętokrzyskie, Prime Minister Mateusz Morawiecki, announcing the Polish deal, He pointed to on the government’s climate policy.

Speaking of the recent floods, he arguedThat the government “deales with it with proper care, and at the same time listens to specialists in meteorology, hydrology and climate change, because climate change takes place over very long time cycles, and we know very well that in the historical time of the past thousand years, a place already “

Moraviki acknowledged that climate change is proceeding dynamically, but emphasized that the government has been watching them with appropriate interest, “by applying appropriate measurement tools resulting from the technological advances of our century”, and “our changes in the economy are adapting to this pace in the fastest way possible.”

Regardless of what we call the rapid rise in global temperature – global warming, climate change, climate catastrophe – we face one of the greatest challenges in the history of civilization. This is what the science behind says At least 165 years of research.

It appears that the scientists’ findings have not yet reached Aleje Ujazdowskie, where Morawiecki’s offices are.

Anything but the simplest truth

The prime minister’s statement fits with the way many – not just Polish politicians – say anything but acknowledge that the main cause of climate change is human activity. July 3 Donald Tusk used a similar evasion techniqueWhen he took power on the Civic Platform, he spoke of scientists “arguing” about the causes of climate change, in Post data But he stressed that “the climate catastrophe is not posed by anyone” and immediate countermeasures must be taken.

The problem is that the climate change we are all experiencing and because of which we have more and more problems in Poland and around the world, is not the result of any “very long cycles”. The Prime Minister’s statement seems to indicate that climate change is a natural phenomenon.

“The earth does not warm because it wants”

Meanwhile, global warming is the result of the rapidly increasing concentration of carbon dioxide (CO2) in the atmosphere, which – in short – acts as an increasingly airtight home insulation. However, the land is not a home you can leave, do a quick renovation, or just open the windows.

By the way, it has not been enough for years to “closely monitor” climate change, immediate action is needed – it is Syntax of science.

Contrary to popular opinion reiterated by Morawiecki, there are no strict climatic cycles. There are Milankovitch orbital cycles and the solar activity cycle that affect the Earth’s climate. Milankovitch cycles are tens of thousands of years of changes in Earth’s orbit and axis of rotation. Periodic changes in solar activity are more common; The basic solar cycle is about 11 years.

“Climate change is the result of a modification of the Earth’s energy balance. These, in turn, require “external forces, such as a change in the amount of solar radiation reaching the Earth, a change whiteness or greenhouse gas concentrations. It can be periodic, as in ice ages, but with non-periodic excitations it can be different. So the argument that “this is only a phase of the natural cycle” is just a famous phrase sounds great. The earth does not warm because it wants to. She warms up because something is forcing her to do so, the gate writes “Nauka o klimacie”

See also  How do you divide a large room?

Of course, if we look at the history of the Earth, we can come to the conclusion that “farmer’s reason” – one of the favorite “research methods” of so-called climate skeptics – our planet is actually going from cold to warm.

Even if we adopt such an insightful approach, there is no natural “long-cycle” factor that explains why the Earth’s average temperature has risen in the just over 200 years since the Industrial Revolution, by about 1.2°C, including only about 0.9°C years 1951-1980.

In short, talking about cycles is magical thinking. When we do not know what causes a particular phenomenon, we say that there are “cycles”. Science is well aware of the causes of climate change. anthropogenic extortion [cywilizacyjne emisje gazów cieplarnianych, w tym CO2 – przyp. red.] Incredibly outweighs what could be the effects of Milankovitch cycles and solar cycles ”- says Professor at OKO Press. Szymon Malinowski of the Institute of Physics at the University of Warsaw, co-author of the textbook “Nauka o klimacie” and co-host of the aforementioned portal under the same name.

Research has shown“In the last half century, the effect of changes in the activity of the Sun on the increase in average temperatures on Earth has been insignificant, and in recent decades – even negative,” Climatology writes. Sun activity is decliningBut the Earth’s temperature is rising.

1.2 degrees in less than one hundred and fifty years

“In the case of climate, true periodicity is almost exclusively related to the movement of the Earth and other planets around the Sun. For example, long cycles of alternating glaciations and warmer periods result from changes in the parameters of the Earth’s orbit,” says Oko Preis Piotr Flork, a Polish climatologist who He works for the British Met Office, which is the equivalent of our IMGW.

See also  The least important score? "It is necessary to change the education paradigm."

“Orbital changes are too slow to explain the planet’s current warming.

For example, the Earth emerged from the last Ice Age about 10,000 years ago, when the average global temperature rose by 6 degrees Celsius. Global warming today has reached 1.2 degrees in less than one hundred and fifty years, and therefore at a much faster pace.

The eye checks whether politicians are saving the world from climate catastrophe.
Support us, we want to survive too.

A permanent fellow at OKO.press and several English language media, including Politico Europe. He writes mainly on topics related to the climate crisis, energy and environmental protection. Twitter: https://twitter.com/WojciechKosc

Don't Miss it Tokyo 2020. Iga Świątek will enter the third round. Naomi Osaka and Novak Djokovic in the Main Arena (Game Plan)
Up Next Tokyo – July 26 (Program)