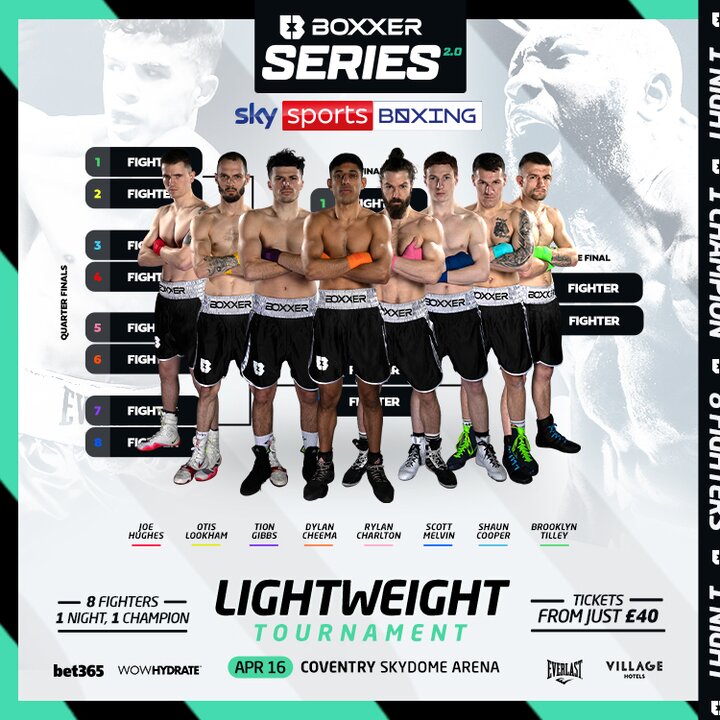 On Saturday in Coventry, located in the center of England, another edition of this year’s Boxxer Festival is planned. This time it will be an eight-man light heavyweight championship. Broadcasting exclusively at Fightklub!

Boxxer is a tried-and-true formula that is very popular in the UK, where a tournament is played with eight boxers in one day. First, they fight in the quarter-finals, the winners face off in the semi-finals, and the best of them fight for victory in the entire event. Each fight is fought over a distance of three three-minute rounds. The competition in Coventry will be managed by: Dylan Cheema, Tyon Gibbs, Otis Lockham, Joe Hughes, Rylan Charlton, Scott Melvin, Sean Cooper and Brooklyn Tilly.

The winner of the championship can count not only on the moment of fame, but also on a large financial prize and broad prospects for dynamic career development in the lightweight. The tournament format with three fights in one evening with competitors who often prefer different fighting styles is one of the toughest challenges in professional boxing. But for the winners, it’s also one of the biggest opportunities to make a career at a fast pace.

Of the competitors who fought over the weekend at the Skydome in Coventry, Shaun Cooper could boast the most experience, with a 12-3 score, and he fought for even the lesser-known titles. Rylan Charlton (6-2-1) is a little less experienced, but the black horses in the championship might be Tyon Gibbs and Joe Underwood Hughes. Ahead of Saturday’s gala, they both had seven victories and not a single defeat, and they will surely do everything in their power to ensure that their achievements on Sunday, with so many losers, remain ground zero. However, increasing the stats can only be achieved by one.

The first edition of the Boxxer Championship was held last November at the Echo Arena in Liverpool, and the competition was fought in the Super Light category. The entire event ended with the victory of Cori Gibbs, who broke his record of professional victories to sixteen, and secured a long-term and highly lucrative promotion deal with Boxxer and Sky Sports Boxing. It is already known that Saturday’s championship in Coventry will not be the last in the series, as another event is planned for May 21, this time at the junior heavyweight division in Sheffield.

Boxxer Championships in Coventry on Saturday 16th April at 22.00 Live at Fightklub!

watching video: Fantastic duels in ONE Championship: A New Era

Don't Miss it Steelrising on first play. Release date postponed
Up Next KUL Study Center for Guests – Signing of a letter of intent with the participation of Minister Przemysław Czarnek – Ministry of Education and Science