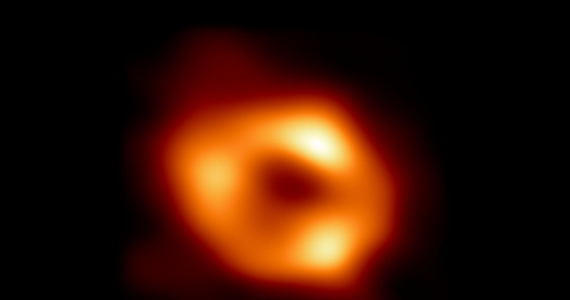 Scientists have provided the first image of a supermassive black hole at the center of our galaxy. This discovery was reported by the European Southern Observatory (ESO) and participants in the project called Event Horizon Telescope (EHT). The Poles are also involved in the discovery.

A black hole is the region in which there is The force of gravity is so strong that it does not allow any substance to escape, not even light. To produce it, you need to assemble a very large block into a small volume. The mathematical boundary of this region is called the event horizon. There are two main types of black holes: stellar masses and supermassive black holes with a mass of millions and even billions of solar masses.

Scientists have long suspected that there is a supermassive black hole in the center of our galaxy. The strongest evidence to date is observations of the movement of stars near the center (Sagittarius A *, abbreviated as Sgr A *), which indicates the presence of a mass four million times greater than the mass of the Sun in this place.

The image of the black hole was obtained as a result of data analysis from the collaborating radio observatories of the project called Event Horizon Telescope (EHT). Scientists presented the results of their work today at press conferences organized simultaneously in several places around the world.

We were amazed at how well the ring size fit with the predictions of Einstein’s general relativity. These unprecedented observations have greatly improved our understanding of what is happening at the center of our galaxy and given new insight into how the supermassive black hole interacts with its surroundings. – noted Jeffrey Bauer of the Institute of Astronomy and Astrophysics, Academia Sinica in Taipei (Taiwan), who is on the EHT project team.

The image shown is not the first image of a black hole. In 2019, observations of the black hole’s shadow from Messier 87 (object M87*) were announced. Both are supermassive black holes, but there are differences: M87* is about 1,600 times larger than Sgr A*.

In the case of black holes, the mass is directly proportional to the radius, so M87* is also 1,600 times larger at the same time. However, due to the difference in distance, they both have the same angular size in the sky for us. The black hole is located in M87*, 55 million light-years away, and Sgr A*, 27,000 light-years away.

Scientists point to this Despite these differences, the facilities are very similar. As Sera Markoff of the University of Amsterdam in the Netherlands, co-chair of the EHT Scientific Council explains, We have two completely different types of galaxies and two completely different masses of black holes But near the edges of these black holes they look eerily similar, which tells us that general relativity governs these things closely, and any differences we see more must be due to differences in the matter surrounding the black holes.

Observations of “our” black hole have been much more difficult than those of galaxy M87, due to the faster contrast in the vicinity of the black hole. In both cases, the gas travels near the black hole at the same speed, close to the speed of light. However, it takes days or even weeks to orbit M87*, while gas takes only a few minutes to circle Sgr A*. This means that the brightness and gas structures around Sgr A* change more rapidly, making it difficult to obtain a stable image. Scientists had to develop methods that take into account the motions of gas. This was the reason the results for M87* were announced a few years ago, and now only for Sgr A*.

The research was published in a series of articles that appeared in a special issue of the scientific journal The Astrophysical Journal Letters.

The European contribution to this important discovery was, in addition to research teams and telescopes, also the EHT data integration supercomputer, held at the Max Planck Institute for Radio Astronomy in Germany, and financial grants from the European Research Council and the Max Planck Society in Germany.

There are two types of Poles on the EHT team: the professor. Monika Mościbrodzka from Radboud University in Nijmegen (Netherlands) and Dr. Maciek Wielgus from the Max Planck Institute for Radio Arts in Bonn (Germany). a. Mościbrodzka made a significant contribution to the theory of publications, and Dr. Wielgus – to data processing. He is the first author of a publication on Sgr A* light curves.

Thanks to the fact that scientists now have images of two supermassive black holes (one at the top and one at the bottom of the mass range of these objects), they can study the differences between them and better test the behavior of gravity in such extreme environments.

There are also opportunities for better data, as the EHT observation campaign conducted in March 2022 included more telescopes than before.

Don't Miss it Russian soldiers refuse to fight with Ukrainian forces. They are insulted
Up Next slag. Robert Lambert – Is it time to be the captain of the British national team?