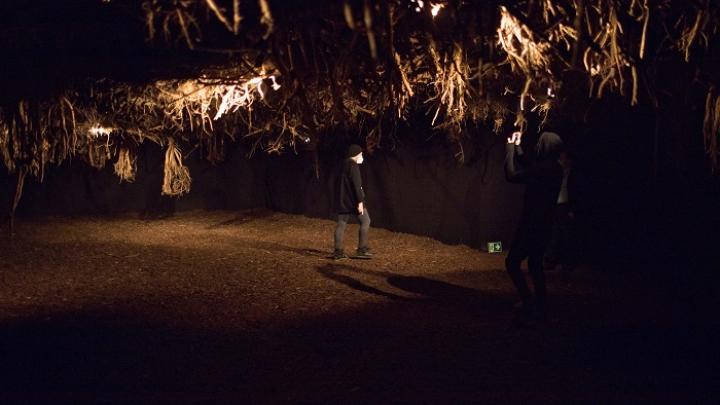 I want to persuade you to see the exhibition “Rhizopolis” – in the National Museum of Art “Zachęta”. It was also seen by a forester, Professor. Kazimierz Rykovsky – who believes that getting closer to nature and restoring a sense of identity will be the next stage of human evolution and civilizational progress: “This is a movement towards the future – towards maintaining the continuity of life. Perhaps a step in the post-anthropocene era?”.

a. Rykovsky is a forester, but he uses the forest in many ways – he sculpts in wood, stone, clay, paints pictures. As he himself says – “drawing artistic inspiration is to use the forest too.” Rykovsky believes that man and nature are linked by an umbilical cord, which we will never cut, because we are born thanks to the cooperation of billions of living beings and the struggle for the permanence of life on the planet written in our DNA. Our vigilance may have calmed us on this subject, but you can already see that the mixture of shame and pride will prevent us from sleeping peacefully.

Art and culture play an important role in awakening sensitivity. This has always been the case—artists and writers often predicted what science was constantly doing with their visions. Shakespeare’s works contain a great deal of psychological knowledge that has waited for scientific confirmation for many years. Goethe’s great friendship with scientist Alexander von Humboldt resulted in the drama “Faust”. Humboldt himself has repeatedly emphasized that Goethe’s delicacy and humanistic outlook helped him solve many scientific puzzles.

During the interview with Prof. Rykovsky, we realized that we had seen the exhibition “Rizopolis” in Warsaw “Zachota”. My reception of the last exhibition by Joanna Rajkowska was somewhat distorted by the fact that I heard one of the conversations with the artist, which was prepared as part of the promotion of the exhibition. I asked Professor Rykowski what she thought of the horrific vision of Rajkoska, which leads the visitor underground. It is dark and stuffy with tree roots hanging above it. We found out that we had been filmed by three cameras when we entered the last room. After a few minutes, we see ourselves – our reactions to the “new reality”.

“What is the end of the world?” asked the professor in surprise. In his opinion, if the apocalypse occurred on the surface of the earth, then the trees would not survive either, so our underground escape – to the city of roots – would be meaningless, because they would also die.

“Art is achieved through the viewer/reader. The feeling of the recipient may differ from the vision of the author, but it is important that he shows us a problem. I took Rajkowska Gallery in Zachta as a message. The world does not end with what is available to our eyes – there is life underground too. What we see on the surface The Earth is only a small part of our world, and the Earth still hides many secrets – we go under its surface and see how the roots of trees created their own “world” – “Rhizopolis.” The professor argued.

I came home and checked the origins of Rhizopolis. Wikipedia led me to define the word “rhizosphere” – this is the space that includes the surface of the root, the surrounding soil, and the cells of the cortex. It is an area of ​​intense microbiological activity and the relationship between plant, soil and microorganisms. It is only 5 cm from the soil. You never know what new will emerge from these complex relationships with soil roots. it’s interesting.

I shared my experience with you. I have no doubt that each individual’s attention can attract something completely different. Test your imagination and go to “Zachęta”.

The exhibition “Rhizopolis” will be available to visitors until August 8, 2021.

Don't Miss it Highway: Mateusz Schwednecki of Wókniarz Częstochowa will fight for the title of world champion
Up Next Nurses Earnings in Great Britain. She took care of the prime minister, and she’s leaving because of low wages