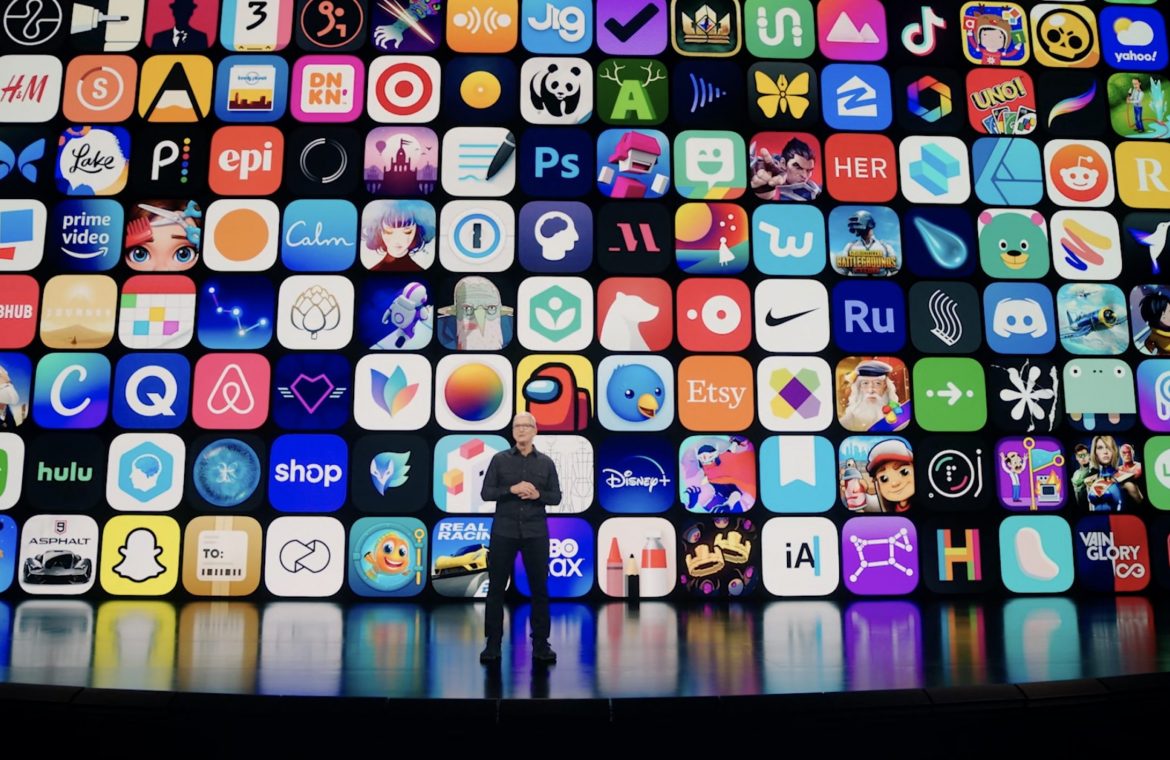 The WWDC 2021 conference begins today, and opens with a keynote address, due to the pandemic, that does not have a conference format with a live audience. Instead, Apple has prepared a special video that combines the presentation with a conference for customers and programmers who create software for Apple devices.

Tim Cook appeared on the stage, and in front of him… a sea of ​​Memoji avatars sat. Moments later, he started showing off new products.

The news of the changes made to FaceTime began to be shown. Apple has improved both audio and video. Now the microphone should better pick up the voice of the interlocutors and cut out background noise that disturbs conversations, a background blur function was added, and it was possible to call friends who do not have iPhones via FaceTime – you will be able to send a link to the conversation that they will open in the browser.

Continue reading: FaceTime escapes from Apple’s reserve for PC and Android! Zoom has a serious competitor

IOS notifications have also been redesigned. Apple knows some people get too much of them, so the system will intelligently group them and prioritize them.

Do not disturb mode is also developed with the focus function. Thanks to it, we will be able to focus on work and keep in touch with colleagues – the system will pass notifications about messages from work colleagues.

The system has learned a new trick – it can now recognize text in images and determine what is in the image. All you need is a store picture, zoom in to their name or phone number to click on it and call them instantly. This option will not work in Polish at first.

The first novelty is sure to appeal to those with hearing problems. Today, AirPods work well as a temporary hearing aid. The new Conversation Boost feature takes its capabilities to a new level.

The Conversation Boost app combines smart audio processing and beamforming microphones built into the headphones to isolate callers’ voices. The function also connects to ANC, so you can adjust not only the volume of the call, but also mute the surroundings. I personally know at least one person who would be easier to talk to to live with this press release.

Read about what’s new in AirPods: Apple AirPods will become a hearing aid. And this is just the beginning of modernity

Widgets on the Home screen are a big new feature in iPadOS. They will work just like in iOS so far. The App Library has also been added, which will allow you to remove unnecessary apps and desktops from the home screen.

Multitasking has also been improved. Placing two apps on the screen will be easier thanks to the new shortcuts added. Also added the ability to open selected app items on top of two other apps – it works like a popup.

The new Privacy Center will inform the user about the apps and how often they access key private data. It will be easier to select the app from which you want to remove permissions.

One of the novelties announced at WWDC 2021 is iCloud +. This will be available to all iCloud users without paying an additional fee. Today, this service consists of three new products: Private Relay, Hide My Email, and HomeKit Secure Video.

Power Relay can be compared to a VPN service. Thanks to it, all network traffic coming from the user’s device is encrypted and routed through two mediums. As a result, Apple claims that even he himself is not able to eavesdrop on this traffic and associate it with a specific user.

Hide My Email allows you to create a temporary email address that will be associated with the main address. This is a simple but also good way to protect against unwanted advertising messages. When a particular service provider starts using the address generated by Hide My Email to send ads repeatedly, you can delete that address without deleting the entire mailbox.

The latest news is a picture of the maximum number of security cameras that can be connected to HomeKit. As of today, no more than five can be connected. With iCloud+, that limit disappears.

The latest is of course the name – the new macOS 12 is called Monterey and is no different visually from macOS 11 BigSur, at least at first glance.

Universal Control is undoubtedly one of the biggest novelties. The One Magic Mouse can ride between a Mac and an iPad, just as it does on Logitech devices. The functionality does not require additional configuration, and Magic Mouse will automatically recognize that the devices are next to each other. The function works with Mouse and Magic Trackpad as well as keyboard on MacBooks. You can also transfer files between devices – as in Logi devices with Logitech Flow functionality.

There is also an AirPlay to Mac feature that allows you to instantly transfer content from iPhone or iPad to Mac computers.

Some changes are new to FaceTime and iMessage, as in iOS 15. It will be very easy to share screenshots, links and files with friends and family.

There will also be a focus function, as in iOS 15 and watchOS, which will of course be integrated with other devices to reduce “distractions” during work, video calls or meetings. The Shortcuts function, known from the iPhone, will also appear on macOS 12, allowing you to create your own automation.

The biggest changes occurred in the Safari browser. It has changed both visually and functionally. There is an option to collect cards that work across all Apple devices – Macs, iPhones, and iPads.

The application responsible for breathing, peace and calm will be greatly improved. Mindfulness will replace the previous breathing and will focus not only on regular breathing, but also allow you to restore peace – among other things with the help of new wallpapers displayed on the watch screen. The app is supposed to inspire us to think of something fun, providing an introduction to relaxation.

With the watchOS 8 update, your Apple Watch will be able to measure your breathing while you sleep by transferring data to the Health app. Of course we should wear a watch during the night measurement. For many users, this can be a huge problem, given the running time of the watch on a single charge is just over a day.

Continue reading: Apple Watch would be a better companion. watchOS 8 focuses on health and sports

New functions that are directly or indirectly related to the smart home are spreading among various devices and operating systems – after all, what proves the strength of the smart home is the synergy, in this case between iOS, iPadOS, watchOS and tvOS- em. The first novelty is the ability to watch movies together. The new feature is called SharePlay.

Users who start a video call from the new FaceTime on their iPad or iPhone can start the video in the Apple TV app and transfer the image to the TV. Thanks to this, you can comment on a movie or TV series with friends as if they were all sitting in the same room. There is also a surprise – tvOS 15 supports spatial audio.

Continue reading: Siri is on the thermostat and the key is on the phone. This is the new smart home according to Apple

The text is finished

See also  The new Ubisoft hub will provide cross play and cross save for more games
Don't Miss it Sanctions against Belarus. Belavia cannot land in the European Union. You will start flying to other countries
Up Next The. European Basketball Players: Poland’s Great Defeat to Great Britain