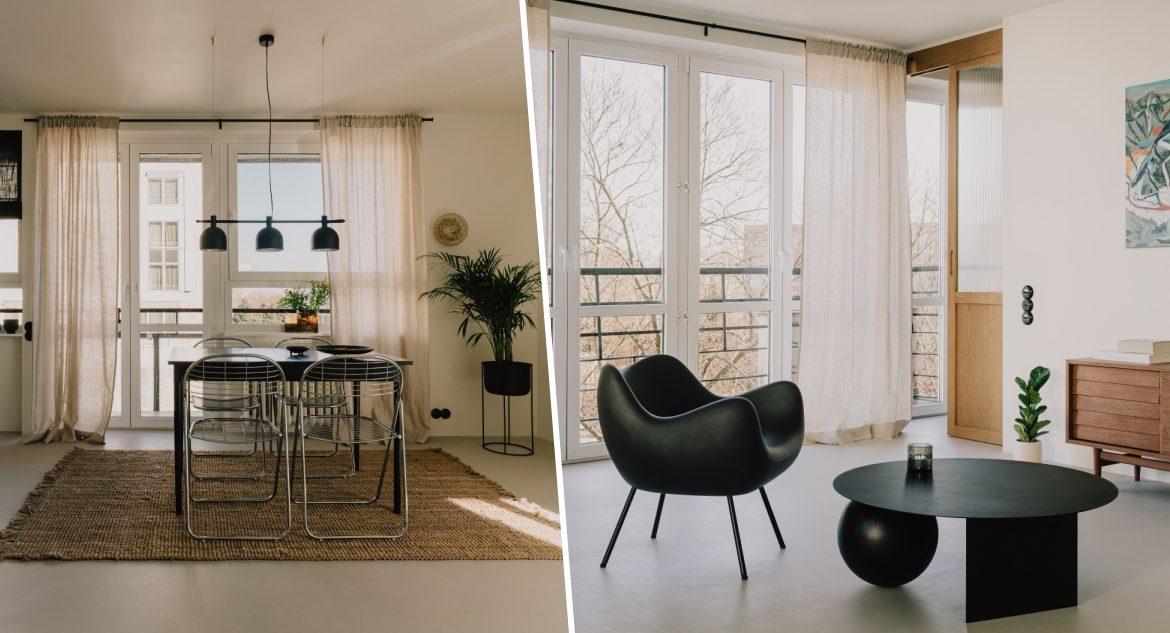 The apartment is 58 square meters and has three balconies facing three different sides of Warsaw. The windows on the east side overlook the green square. Thanks to this, the owners can enjoy a sunny morning. Previously, there were several small rooms separated by walls. The feeling of malaise was eliminated by tearing down some walls and opening up the space. The designer wanted natural light to reach every corner of the building.

Instead of a brick wall, I made a corrugated glass for the office, thanks to which, immediately after entering, we receive a glare of light penetrating the glass – explains Katarzyna Wisławska.

The colors are muted, there is a small beige stone on the floor that, thanks to the height of the apartment, which was very low (245 cm), is visually made. The interior is kept in a simple atmosphere. The space is diversified with accessories that create a homely and pleasant atmosphere. Black and white photos in decorative frames, a crystal wall lamp, or a silver hairbrush in the bathroom – these are just some of them.

Focusing on extracting the modernist features of the building, I tried to create an apartment that would be a quiet haven of clean lines and natural materials, and that you could escape to in the busy everyday life of the hustle and bustle of Warsaw. The main inspiration for the design came from the 1960s in Polish interior architecture – the building was built in 1963 – adds the designer.

In the apartment, you can find plenty of solutions that refer to Warsaw modernity, such as etched glass, wood carpentry, original mosaics from the 1960s on the balcony, crystal sconces, antiques, and furniture from the 1960s, including the Vzor chair designed by Roman Modzilowski from Early fifties and sixties. In the living room, above the chest of drawers, is a painting by the painter of the younger generation, Janek Drujowski, who works in Warsaw on a daily basis.

Don't Miss it Emma Raducano lost her nails. ‘We were a little scared’ tennis
Up Next Concert “With Ukraine” on TVN. Kayah moved to tears